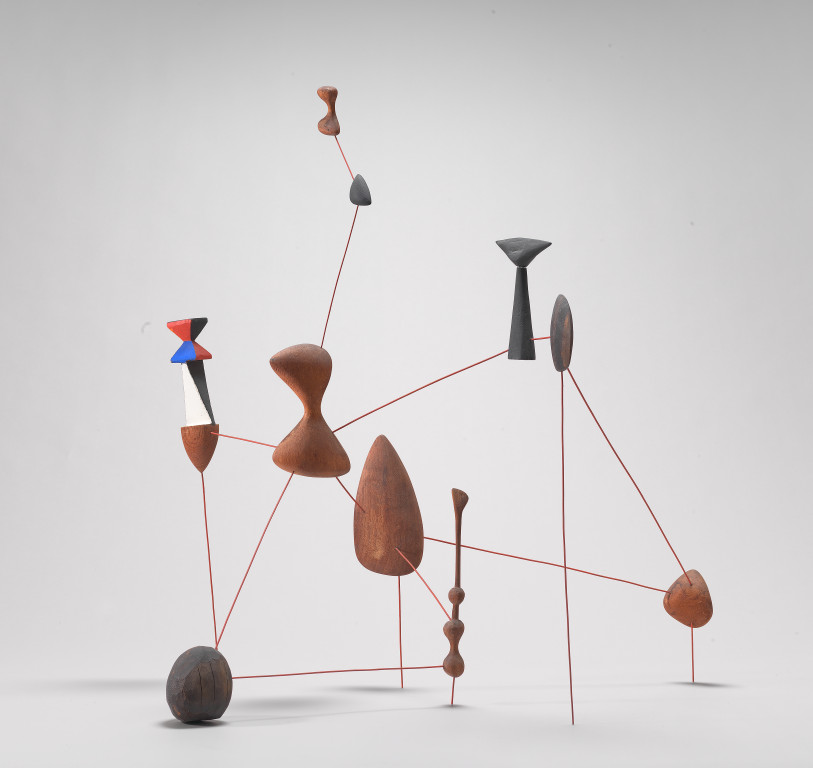 The underlying sense of form in my work has been the system of the universe, or part thereof. For that is a rather large model to work from.

With scrap metal scarce in the midst of World War II, turned to hand carving small pieces of wood into mostly abstract shapes and attaching these—some painted, some unpainted—to a network of rigid wires. After consulting his friends Marcel Duchamp and curator James Johnson Sweeney, Calder decided to call the roughly 29 stationary works “Constellations.”  These delicate tabletop constructions— among the most complex—constituted what Calder called “a new form of art.” The Constellations afforded the artist another sculptural means, beyond his well-known mobiles, to investigate the organization of forms into open, abstract compositions.

Vertical Constellation with Bomb includes 10 wooden pieces, mostly geometric or biomorphic, connected by thin steel wires painted red. Five of the shapes are unpainted, and four are painted a deep blue. The falling “bomb” is a combination: the nose is unpainted, the body is blue and white, and the attention-grabbing fins are decorated with a pattern of brightly colored triangles—red, orange, blue, black, white, and yellow.

Astronomy interested Calder from an early age, and often he related his work to cosmic space. The Constellations derived from the artist’s early 1930s series of standing sculptures, “Universes,” that resembled orreries (astronomical devices that demonstrate the orbit of planets in the solar system); in relation to the Universes series, Calder described the universe itself, with its “detached bodies floating in space,” as “an ideal source of form.” Vertical Constellation evokes this idea of the cosmos through its broad disposition of variably sized wooden pieces, which define an expansive three-dimensional space. Likewise, the repetition of shapes—such as the two pieces projecting from the top of the sculpture, echoing larger versions below—suggests movement into distant horizons.

Calder’s Constellations share affinities with surrealist works by , , and , all of whom explored situating points or forms in loose configurations through space or across a painted field. Arp and Miró even called some of their works Constellations, highlighting the privileged place that cosmological metaphors held in the development of abstraction in the 1930s and 1940s.

Vertical Constellation’s direct treatment of a contemporary war subject is an anomaly in Calder’s work. The falling bomb doubtless appealed to him formally, but it is also conceivable that the artist sought to comment ironically on the violence at hand by transforming a deadly weapon into a colorful, toylike object. Alexander Calder (1898–1976) came from a family of accomplished Philadelphia artists. His interests, however, veered more toward mechanical devices, and he graduated with a degree in mechanical engineering from the Stevens Institute of Technology (New Jersey) in 1919. In 1923 he enrolled at the famed Art Students League in New York, where he studied painting with John Sloan and George Luks. His first illustrated book, Animal Sketching (1926), derived from studies made at the Bronx and Central Park zoos.

In 1927 Calder went to Paris to study art. He started fashioning small wood and wire animals with movable parts and soon had assembled a hand-operated miniature circus. The Parisian avant-garde flocked to performances of Calder’s Circus, and he joined their circle. Inspired by a visit to ’s studio in 1930, Calder began to experiment with abstract constructions. He created his first mobiles in the early 1930s; the earliest were hand-cranked or motorized, but he quickly adopted free-floating designs. The mobiles synthesized Calder’s interests in engineering, astronomy, and kinetics, as well as his well-known sense of play.

After returning to the U.S. in 1933, the artist introduced biomorphic forms into both his kinetic and stationary sculpture. Already exhibiting widely on both sides of the Atlantic, he bought a farm in Roxbury, Connecticut, in 1938, and then divided his time between the farm and living in France.

During World War II Calder employed more wood in his work due to a metal shortage (though he cut up an aluminum boat that he had constructed for his Roxbury pond and used the metal for several sculptures). In 1943 his Constellations were exhibited at a New York gallery together with paintings by the surrealist Yves Tanguy, who was Calder’s neighbor. Calder noted, “It was a very weird sensation I experienced, looking at a show of mine where nothing moved.” Later that year, at age 45, Calder became the youngest artist to date to have a retrospective at The Museum of Modern Art.

Calder continued to produce innovative works during the remainder of his career, from whimsical jewelry, to theater sets, to the monumental sculptures seen widely in the U.S. and Europe.