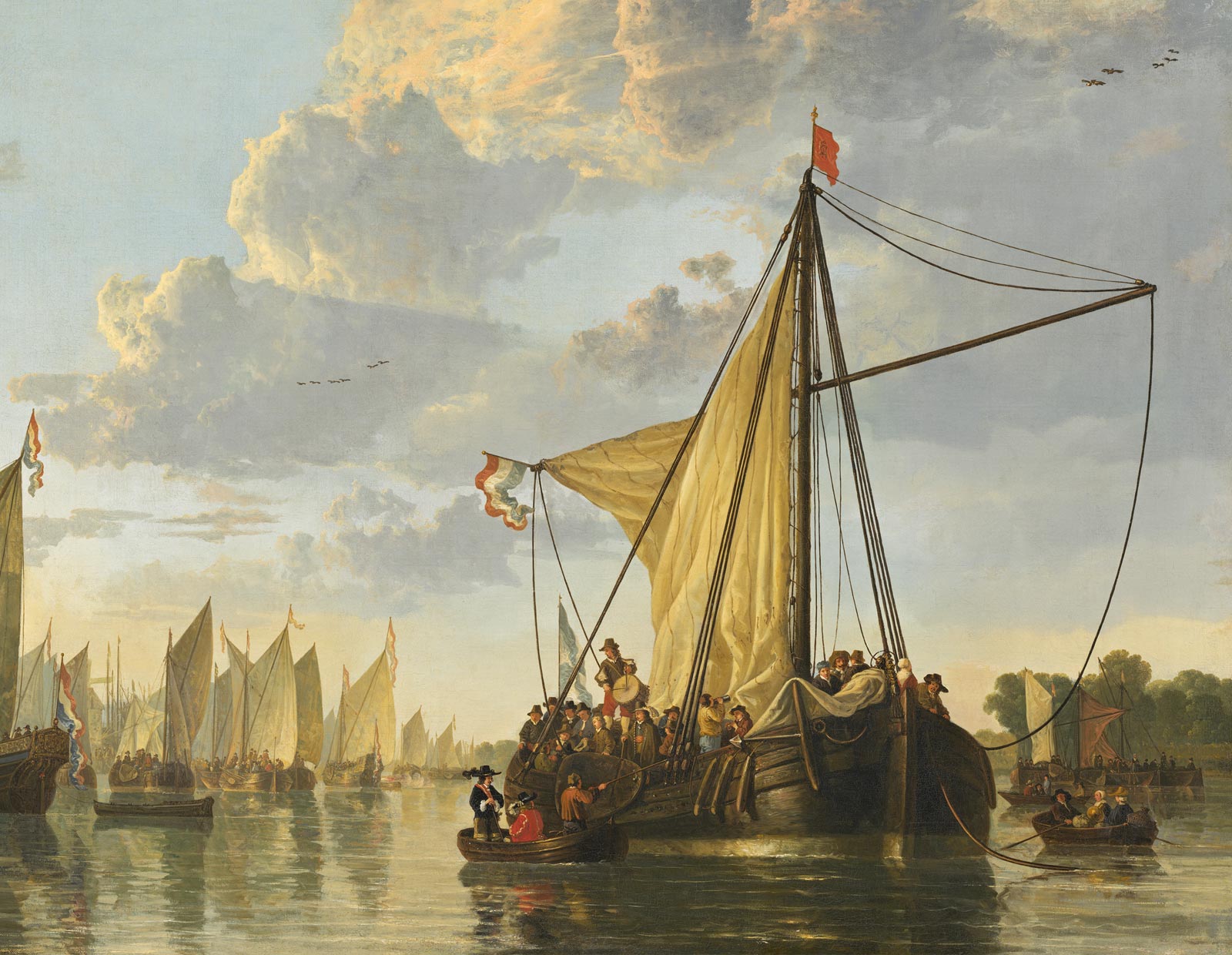 The Maas at Dordrecht

In grandeur and knowledge of aerial perspective, combined with the utmost glow and warmth of the misty or serene atmosphere, Cuyp stands unrivalled….

The lasting appeal of 's masterful depiction of Dordrecht derives from the extraordinary light effects that bring an early summer morning to life and from the dramatic sweep of clouds that enhances the massive scale of the painting.

Dordrecht, situated at the confluence of the Maas and Rhine Rivers, is a mere backdrop to the historical scene on the water. In July 1646 a large Dutch transport fleet carrying 30,000 soldiers and their equipment gathered at Dordrecht in a show of force by the rebel northern provinces—fighting for independence from the Spanish crown—at the onset of the negotiations that would eventually result in the Peace of Münster of 1648.

Crowds jam the quays, bugles and drums sound fanfares, and a shipboard cannon fires a salute. The young officer standing in the small boat wearing a white and red sash—the colors of Dordrecht—likely commissioned Cuyp to paint this historic event. The officer and his brightly clad companion are greeted by a distinguished-looking gentleman and numerous other figures, including a drummer, aboard the larger vessel. On the left, a second rowboat approaches, carrying other dignitaries and a trumpeter who signals their arrival. Most of the ships have their sails raised as though they are about to depart, and fluttering flags suggest the presence of a breeze, yet the overall sense of the scene is one of great calm.

Aelbert Cuyp’s father, Jan Gerritsz, was a successful portrait painter and trained his son to follow in his footsteps. The young Cuyp gained practical experience by painting the landscaped backgrounds of his father’s portrait paintings. He later came to focus exclusively on land- and seascapes, genres in which he not only achieved considerable success but also influenced other painters.

Cuyp’s scenes of rural and seafaring life are placid and dignified. His images frequently include a view of the countryside surrounding his native Dordrecht and are infused with a golden, pastoral light, which was probably influenced by the artist Jan Both, a landscape painter from Utrecht. Both had visited Italy and introduced elements inspired by the Italian landscape to northern painters. Cuyp visited Utrecht regularly and probably saw Both’s work there. Cuyp also drew inspiration from his sketching forays around Holland and along the Rhine River. He was known as a religious man, active in the Dutch Reformed Church, and as a person of onbesprokenleven, irreproachable character. In 1650 he married Cornelia Bosman, a wealthy widow. Later in life he painted fewer works, possibly because of greater involvement in church activities or the lack of financial pressures.