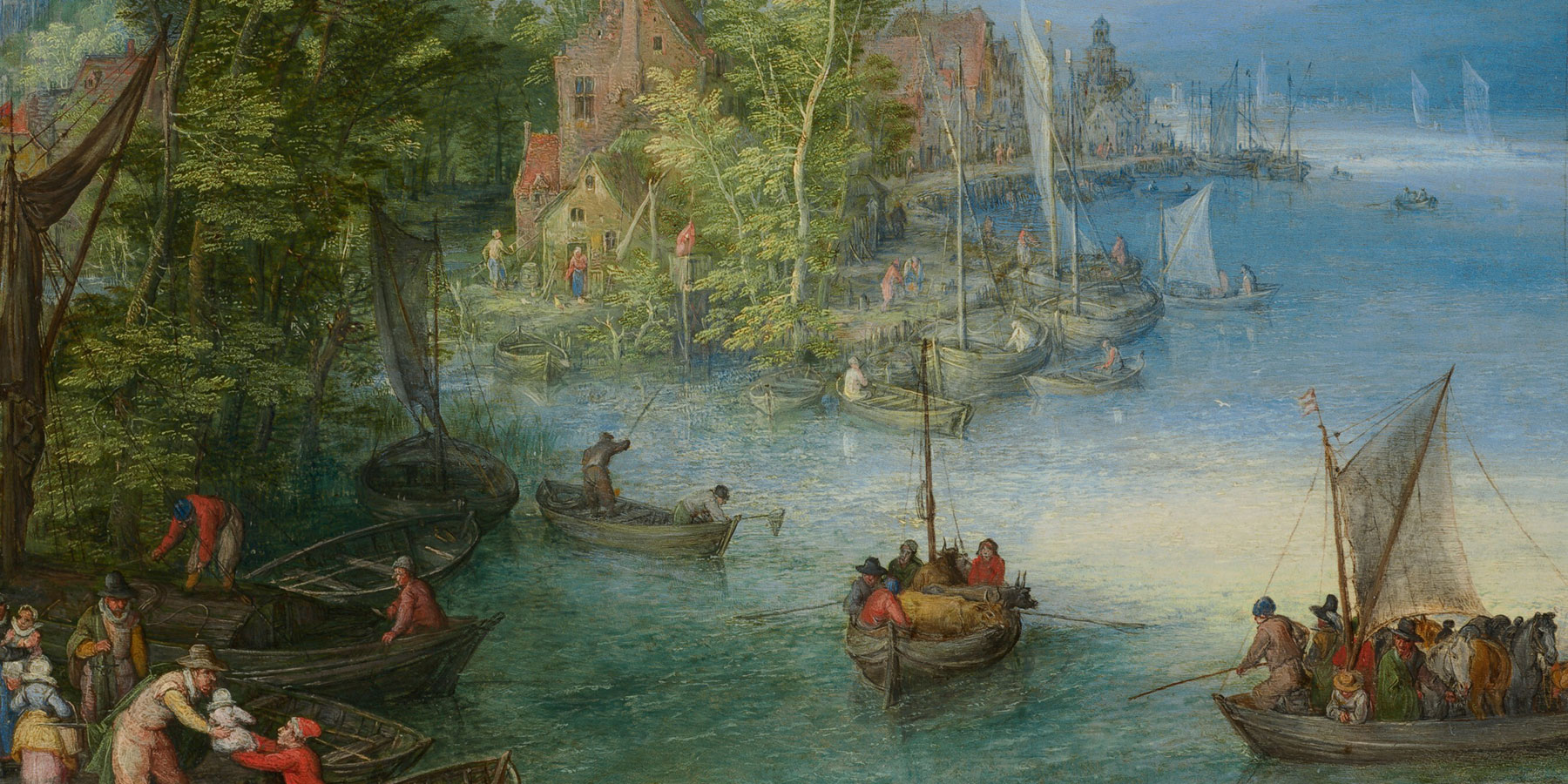 Landscape traditions in the Netherlands featured imaginative, panoramic views that are called “world landscapes.” Artists like Pieter Bruegel the Elder situated the viewer high above these extensive landscapes that encompassed varied terrains and a wide range of atmospheric effects, and which often served as settings for biblical or mythological stories as well as for vignettes of daily life. In the early 17th century, Bruegel’s son, Jan Brueghel the Elder, continued in this tradition by meticulously rendering landscapes on small scale copper panels. Jan Brueghel the Elder, known as “Velvet Brueghel” for the delicacy of his touch, painted flowers so realistically that one of his patrons wrote that one could smell their aromas even in the dead of winter. Flemish artists were also pioneers of the tabletop still life, from Osias Beert the Elder’s refined depictions of culinary delights to Frans Snyders’s large and expressive paintings of fruit and dead game. These sensuous images of carefully crafted objects and expensive imported foods celebrate the abundance and prosperity of the Southern Netherlands. The term “history painting” is used to describe works that feature literary subjects, primarily drawn from Greek and Roman mythology and the Bible. Such subjects were viewed as the most accomplished type of painting because they required the use of the artist’s imagination. The greatest history painter of this time was Peter Paul Rubens, whose religious and mythological scenes demonstrated his profound knowledge of literary sources, boldness of his vision, mastery of the human figure, and a feel for the theatrical possibilities of painting. In creating his large-scale Catholic altarpieces and tapestry designs he often worked out his ideas by painting preliminary sketches called “modelli,” many of which can be seen in the Gallery’s collection. Flemish artists relished producing small-scale paintings that capture the emotions—as well as the antics—of everyday people. Often these scenes take place in the convivial atmosphere of taverns, where men and women have come together to socialize and relax through card playing, smoking, and drinking. David Teniers the Younger was a master of such subjects, and conveys the din of animated conversations in his delicately rendered scenes. Adriaen Brouwer, on the other hand, often used his expressive brushwork to depict more crudely-behaved peasants than those that populate Teniers’s paintings. Peter Paul Rubens and Anthony van Dyck were renowned throughout Europe for their portraits. Rubens portrayed his courtly patrons with strength and nobility, yet he could also capture the gentle humanity of children and family. Van Dyck was admired for his ability to imbue his sitters with grace and nobility, whatever their status in life. Michael Sweerts, who painted on a smaller scale than Rubens and Van Dyck, found his patrons in the middle class, and occasionally portrayed his sitters in a domestic setting, as opposed to the regal backdrops used by Rubens or Van Dyck.