was born in Romania to parents of Russian Jewish descent in an anti-Semitic climate. No matter how famous he became as a cover artist for the New Yorker magazine or for his works exhibited in galleries and museums, he continued to see himself as an immigrant to the United States and an outsider—an awareness that colored much of his work.

Steinberg moved from Bucharest to Milan in 1933 to study architecture. There he became deeply engaged in drawing, contributing cartoons to Bertoldo, an Italian newspaper specializing in humor and satire. However, racial laws imposed in 1938 by Benito Mussolini, which included barring Jews from most professions, put a halt to that. Steinberg remained in Milan long enough to earn his architectural degree, but all the while he looked for refuge in another country. He finally arrived in Manhattan in the summer of 1942, already having published drawings in the New Yorker. On February 19, 1943, the same day that he joined the US Naval Reserve, Steinberg became an American citizen. While he gained quick acceptance in his adopted country, he always maintained his status as an outsider, a visiting inspector of sorts, with a mordant wit and a sharp eye.

This installation celebrates a gift to the National Gallery of Art from The Saul Steinberg Foundation. The generous gift comprises 34 drawings, a sketchbook, and a photograph. A selection of these works is displayed below. 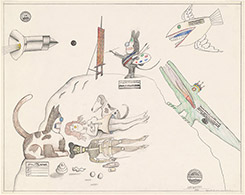 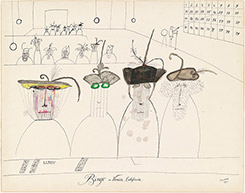 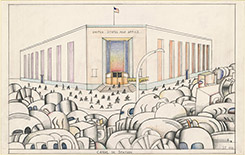 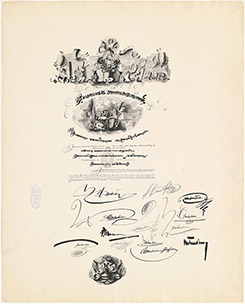 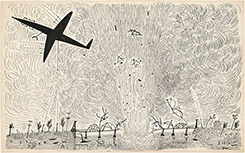 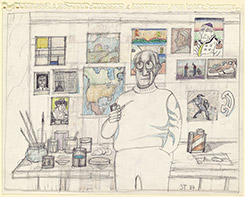 The images depicted on the wall behind Steinberg were ones that inspired him. They include, at upper left, a reproduction of Piet Mondrian’s Composition with Blue and Yellow, a painting in the collection of the Hirshhorn Museum and Sculpture Garden; Vincent van Gogh’s L’Arlésienne (lower left); and Jean-François Millet’s The Sower (lower right). At upper right, a portrait of a military officer resembles ones by Japanese artist Hibata Ōsuke of American navy men in Commodore Perry’s Japan expedition. Looking strangely foreign in a Japanese-style setting, the gaze of the bespectacled officer seems aimed at Steinberg.

Curiously, Steinberg did not depict himself with the mustache he had the year this drawing was made. He also seems never to have smoked a pipe. 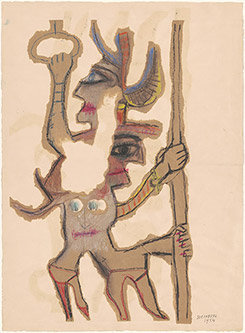 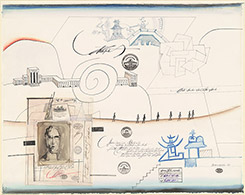 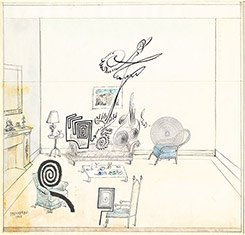 This drawing was published in the New Yorker in 1962, but without the addition of the strip of paper at the top, thus omitting the expanded, elaborate gesture of the central “figure” on the couch. The drawing was modified again—the fireplace and mirror at left, for example, were temporarily masked out—and published in Life magazine in 1966. 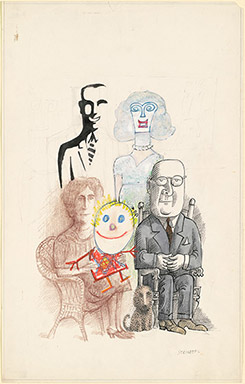 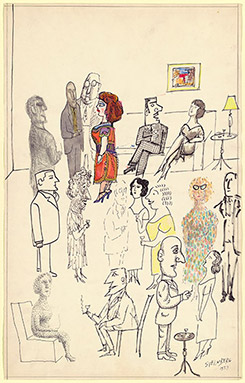 Each guest at this chic cocktail party is represented in a different style. Steinberg used a pointillist technique to depict the woman at right in black-rimmed eyeglasses. He employed a stippling method for the seated woman at lower left—a figure so insubstantial as to be in existential crisis. The man in the checkered suit, seated on the couch, is the art critic Harold Rosenberg, a friend of Steinberg’s and a renowned supporter of abstract expressionism. 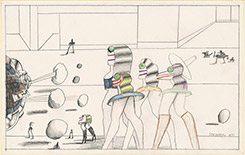 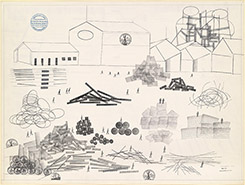 Steinberg had rubber stamps made to his specifications and used them often in his drawings—in this one, nearly exclusively. 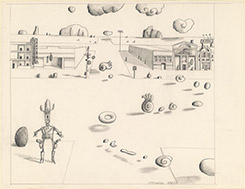 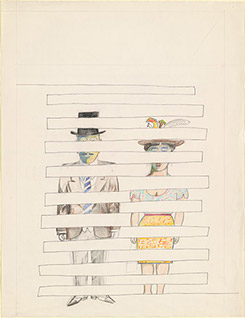 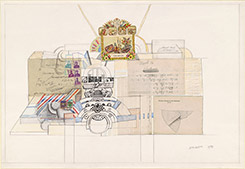 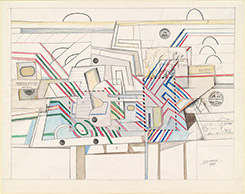 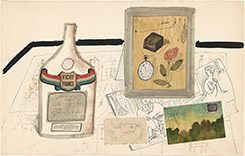