Henry Pelham, the originator of this image, and Paul Revere, who copied his work, made multiple artistic choices to create a more persuasive image:

·       Soldiers are shown lined up, trained on the crowd, and given an order to fire, when in actuality the crowd had taunted, surrounded, and thrown objects at the soldiers, who were not ordered to fire by their commanding officer.

·       Buildings above the soldiers were named “Butcher’s Hall” and “Custom House” to create associations in viewers’ minds.

·       The crowd appears unarmed and disorganized, with some individuals beseeching the soldiers to stop firing, including a woman in the back of the crowd.

·       The same shade of red is used to color the soldiers’ uniforms and the blood spewing from the injured and killed.

Consider the ways in which you learn about current events and news today. What role do images play in shaping your opinions and understandings? What are some iconic images from the news that you can remember?

Learn more about the Boston Massacre:

Addie Card is one of the many thousands of child workers Lewis Hine documented for the National Child Labor Committee from 1908 to 1924. The organization hired him to investigate and photograph child labor practices across the country.

Look closely at this photograph. What can you learn about child labor in the early 20th century from the depiction of Addie?

Learn more about Lewis Hine and his photography:

Manuel Alvarez Bravo is regarded as one of Mexico’s most important photographers of the 20th century.

This explicit photograph is atypical in Alvarez Bravo’s body of work, but it’s one of his most well-known works. He stumbled upon the assassinated sugar mill worker and strike leader after investigating what he thought were fireworks at a party.

What are your reactions to and feelings about this photograph? What else would you like to find out about the man who was killed?

Shahn’s “social realist” Prenatal Clinic shows two pregnant women in an icy green waiting room sitting below a poster reading “Do I deserve prenatal care?” Use this work of art as a springboard for discussion about healthcare and women’s rights. Imagine being in the shoes of the two women and what their lives might be like. What questions does this work of art raise?

San Francisco ’34 Waterfront Strike is a printed version of one of 27 murals on the theme of “The History of California” that Anton Refregier painted for the Rincon Post Office in San Francisco, California, for the Federal Art Project, a New Deal program supported by the federal government. As Refregier painted, he was accused of incorporating leftist and Communist content in some murals by a California congressman, who convened a hearing about the murals in 1953.

This picture shows episodes from a successful 1934 longshoremen strike that shuttered the West Coast shipping industry for two and a half months, resulting in unionization at all West Coast ports.

Let your eyes move from left to right. How did Refregier tell a story in this work of art? What are the major episodes?

Department Store, Mobile, Alabama is one in a series of photographs Gordon Parks took in Alabama while completing an assignment about segregation in the South for Life magazine. It was not published in the final photo essay, but it is one of Parks’s most celebrated photographs.

“Jim Crow” laws—common in many US states from the 1890s to the 1960s, especially in the South—mandated the segregation of public spaces, including bathrooms, drinking fountains, restaurants, public transportation, schools, and theaters, such as the one depicted here with its neon “colored entrance” sign above Joanne Thornton Wilson and her niece, Shirley Anne Kirksey.

Parks has talked about a camera being his “choice of weapon” for fighting poverty, racism, and segregation. How do you fight negative forces in your community?

Congressman John Lewis befriended photographer Danny Lyon in the 1960s when they both were working with the Student Nonviolent Coordinating Committee, an organization that aimed to desegregate the United States. Lewis described this picture in 2002:

“I think this picture depicts in a very clear and distinct way a country at war with itself—a country divided. There are two sides pulling at each other. But it also depicts a very powerful achievement: the young people involved did not engage in violence. Sometimes when you want to change things or make a statement or send a message, you have to simply get in the way.”

“We had discussions about the role of photography in SNCC, but it was only later that I really understood what we were trying to do. We had to find a way to help educate and sensitize people, especially non-Southerners. We were trying to put a face on the movement, to make it real, to make it very plain and simple to ordinary people. We wanted to say, ‘This is what is happening.’ Many people across the country saw all these unbelievable photographs in newspapers or magazines and were inspired by them. . . . They became a tool to educate, inspire, and enlighten the public.”

What images inspire you to make change?

Allen Ginsberg, best known as a defining voice and poet of the Beat Generation, began taking photographs in 1953 after purchasing a secondhand Kodak camera.

Ken Kesey—Merry Pranksters’ day-glo painted “Further” cross-country bus . . . provides a veritable visual and written snapshot of the 1960s counterculture movement. Research the names and references in the photo’s description. How would you describe Ginsberg’s point of view on the events he documented and described?

While she was a master of fine arts student, Martha Rosler created photomontages, or collages, from images she found in House Beautiful and Life magazines. She photocopied these works and distributed them at anti‒Vietnam War rallies and published them in journals.

The Vietnam War was the first war to be televised in the United States. Why do you think Rosler chose to juxtapose an image from the war with a woman vacuuming her drapes in this image? How is this an image of protest?

Down with the Whiteness features a protesting member of the Black Panther Party, a powerful black organization that emerged in 1966 as a response to police brutality in Oakland, California.

Compare this work with Andy Warhol’s Vote McGovern. How are they different and similar? Which work of art do you think is more successful as a form of protest?

Compare this work with Rupert García’s Down with the Whiteness. How are they different and similar? Which work of art do you think is more successful as a form of protest?

The Smithsonian’s National Museum of the American Indian called Fritz Scholder “the most influential, prolific, and controversial figure in the history of Native art.”

Scholder, an enrolled Luiseño, created his “Indian paintings” in the 1960s and 1970s after once vowing never to paint Indians. The provocative works, variously described by viewers as revelatory, ugly, clichéd, and realistic, coincided with the American Indian Movement of the 1970s that advocated for Indian civil rights.

Lorilland Tobacco Company commissioned Scholder, along with other contemporary artists, to create prints in honor of the US bicentennial. Scholder contributed Bicentennial Indian to the series.

How would you describe Scholder’s depiction of this figure? What statement do you think he might have been trying to make?

How would you describe the relationship between these two people?

In 1985, Jim Goldberg documented residents living in Neville Manor, a nursing home in Cambridge, Massachusetts. Goldberg used his camera to tell visual stories about the residents, who might be otherwise ignored, overlooked, or even feared. Goldberg has also photographed other groups, including homeless youth, wealthy and poor San Franciscans, and immigrants.

As part of his nursing home series, Goldberg photographed one couple living with the impact of Alzheimer’s disease. Why do you think Goldberg chose to document two clocks in this set of photos?

What statement do you think Goldberg might have been making with a series focused on a nursing home?

Glenn Ligon’s painting is based upon signs carried by black sanitation workers striking in 1968 in Memphis, Tennessee. Their signs referenced the first line of Ralph Ellison’s seminal 1952 novel, Invisible Man, which reads “I am an invisible man.” Instead, though, their signs insisted, “I am a man.”

Ligon changed the spacing and sizing of letters from the strikers’ signs in this breakthrough painting, but not the words themselves. What thoughts, emotions, and questions does this work raise for you? How is Ligon’s work different from the signs of the strikers? 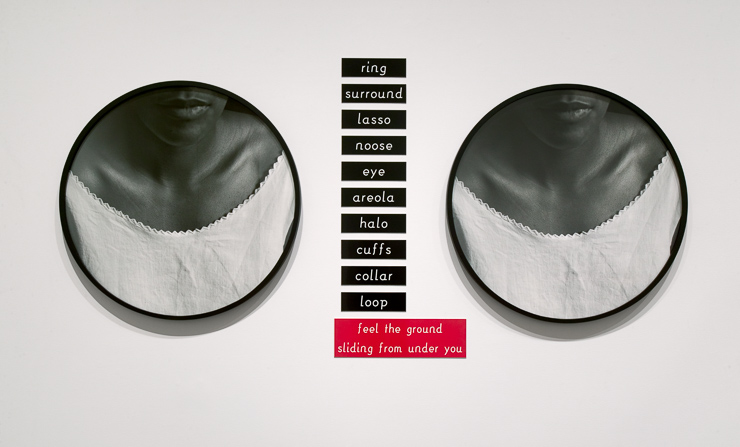 Lorna Simpson, whose multimedia work consistently considers themes of identity, race, history, and gender, pairs images and text in this work to viscerally activate viewers’ imaginations about the history of lynching in the United States.

Why might Simpson have included two identical photographs of the same anonymous woman in this work of art instead of using a single photograph? What emotions and thoughts did you experience while reading the text?

Learn more about the history of lynching in the United States.

Deborah Luster was one of a few photographers hired to document parishes in northeastern Louisiana in the late 1990s for a federal grant application. As she drove around, deciding what to document, she began to wonder, “Where are all these people?” She started to notice small prisons dotting the landscape. “Maybe they’re all in prison?”

Luster’s stop at one of the prisons led to One Big Self: Prisoners of Louisiana, a project in which she documented prisoners held in correctional facilities across Louisiana, including the infamous Angola penitentiary. This photograph has writing on the back, giving us some details about Eddie M. “Fat” CoCo, including his future plans: “Be success/Lawyer”

Eddie chose how he would look for his photograph. Why do you think he chose to wrap himself in a flag?

•     Ta-Nehisi Coates, “The Black Family in the Age of Mass Incarceration,” The Atlantic, October 2015

•     Chris Hedges, “Why Mass Incarceration Defines Us as a Society,” Smithsonian Magazine, December 2012

Learn more about Deborah Luster’s One Big Self.

In April 2004, CBS News published photographs showing prisoner torture and abuse conducted by US CIA and military personnel at Abu Ghraib prison in Iraq. These photographs led to widespread investigations revealing a systematic pattern of human rights violations and convictions of multiple US soldiers.

Compare Richard Serra’s Abu Ghraib with the original source photograph of a hooded and abused detainee. (Please note that the photograph and related images may be disturbing to you and your students.) How are they similar and different? Which image is more powerful to you? 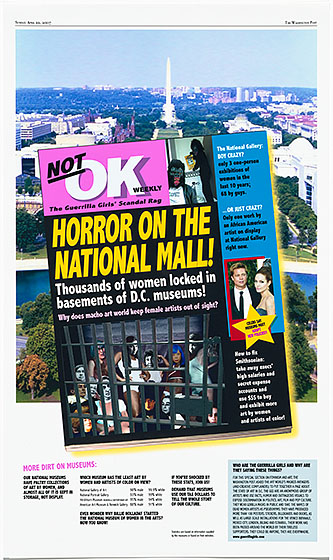 The Guerrilla Girls are an anonymous group of female artists whose works protest the lack of gender and racial equality in museums, including the National Gallery of Art. Their work challenges discriminatory practices on the part of museums in collecting, exhibiting, publishing, and hiring.

Why might the Guerrilla Girls have used the structure of a sensational tabloid to create Horror on the National Mall!? Compare this “tabloid” and its content to the design of supermarket tabloids and the kinds of news they typically report.

Left Palm and Knife Edge is part of a series of works of art by Jenny Holzer called Redaction Series that features reproductions of declassified US government documents related to military activity in the Middle East.

The redacted handprint shown here is that of a US soldier who was charged with detainee abuse.

Holzer said she used a painted canvas as the ground for the series because “people take them [paintings] seriously,” more so than declassified information. Holzer also said this work of art functions as a form of protest. Do you agree or disagree with Holzer’s statements? Why or why not?