Allegory of Fortitude
pen and ink with gray and washes, heightened with white gouache over chalk
Julius S. Held Collection, 1985.1.49 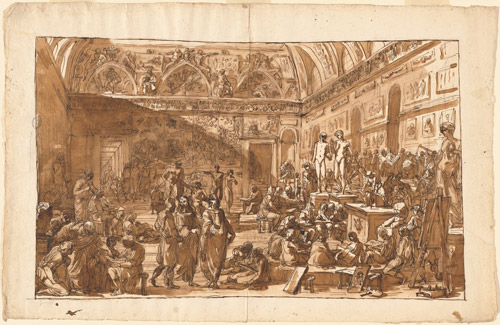 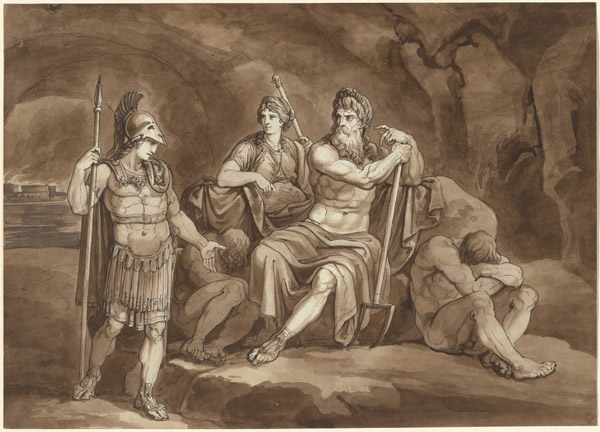 Telemachus Requests Permission from Pluto to Seek His Father in the Underworld, 1809
pen and ink over pencil with brown and gray washes
William B. O’Neal Fund, 2014.94.1

This unusual subject derives from a late seventeenth-century French novel in which the adventures of Telemachus, son of the Homeric hero Odysseus, serve as an allegory of education and the path to good governance. An early work by Pinelli, this vigorous drawing, with its knowing references to ancient statuary, reflects his training and early activity as a sculptor. Pinelli would go on to become a prolific illustrator of both classic texts—such as his illustrated Dante also featured in this exhibition—and of scenes of contemporary Roman life, featuring an elegant, almost purely linear style.

The leading neoclassical painter in late eighteenth-century Florence, Sabatelli went to Milan in 1808 and became an influential professor at the Academy of Fine Arts. Upon arrival he undertook an ambitious project to interpret the Book of Revelation, a measure of artistic imagination ever since Albrecht Dürer published his famous series of woodcuts in 1498. The six resulting etchings, in a style combining meticulous draftsmanship with visionary fervor, remain Sabatelli’s most significant work as a printmaker. This plate illustrates some of the most famous verses from Revelation (6:1–8), which describe the opening of the first four of seven seals and the subsequent emergence of the four horsemen of the Apocalypse. They represent, from left to right, death, injustice, conquest, and war.

This drawing is virtually identical in scale, composition, and detail to the etching by Sabatelli on the left. On the one hand, this drawing cannot be a copy by another artist because the hand and quality are perfectly characteristic of Sabatelli. On the other, if the drawing had preceded the print as a preparatory study, one would expect to find slight differences between the two and the drawing’s orientation most likely would be reversed. Instead, the drawing appears to be one of numerous repetitions of both individual motifs and entire compositions that Sabatelli created for the many admirers of his draftsmanship. 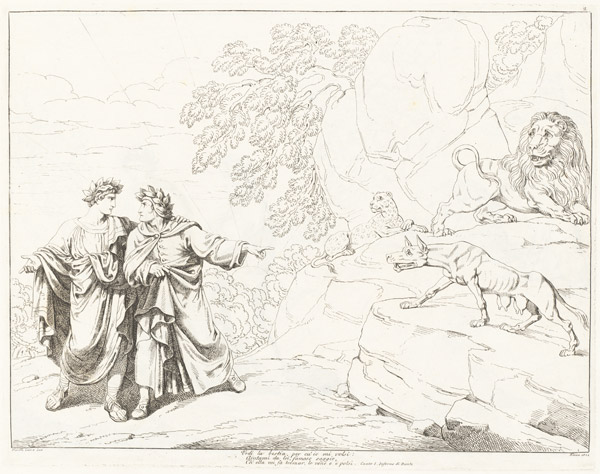 Pinelli’s late work was devoted to illustrating narrative texts, both ancient and modern, in a polished, linear style that represents his own variation on neoclassicism. One of his major projects was the illustration of Dante’s Divine Comedy in three folio volumes composed of 145 plates (1824–1826). This plate from the Inferno combines the scenes of the poet’s encounter with a leopard, lion, and she-wolf upon his descent into hell and the subsequent meeting with Virgil, his great precursor and guide, who warns, “You must go another road, if you wish to escape this savage place.” Pinelli’s swift preparatory study, on the left, determined the basic arrangement of the composition. 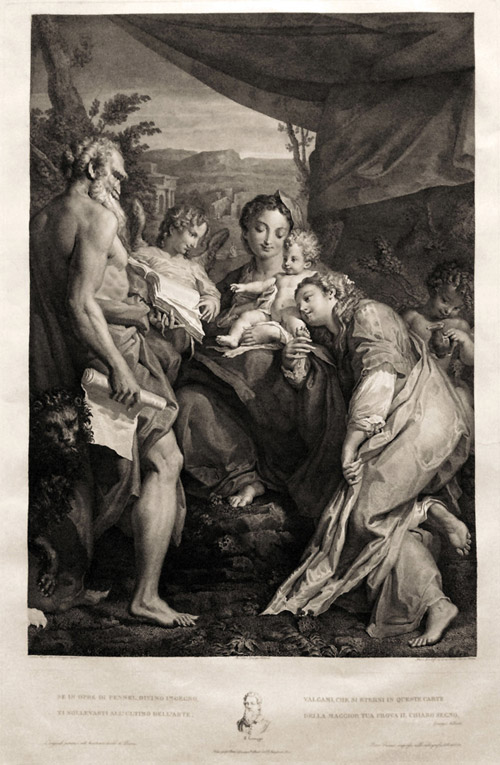 Virgin and Child with Saints Jerome and Catherine and an Angel, after Correggio, 1826
engraving, proof before completion and letters
Purchased as the Gift of Matthew and Ann Nimetz, 2014.65.1

Correggio painted the so-called Madonna of Saint Jerome in the late 1520s for the church of Sant’Antonio, Parma. Ardently admired through the first half of the nineteenth century, it was engraved dozens of times. This print is usually judged to be the most successful at conveying the painting’s subtle tones, suffused atmosphere, and gentle sentiment. Gandolfi, the last figure in an important family of Bolognese artists, undertook this version at the behest of Giuseppe Vallardi, a leading dealer and collector in Milan who also composed the accompanying verse.

The title of this print comes from the artist’s inscription along the lower edge. The scene apparently takes place in an antique setting, indicated by the statue on a pedestal, the temple facade, and the horse-drawn chariot at right. The connection between the inscription and this subject—like that between the disciplined composition and the agitated handling—is, however, difficult to ascertain, as is the allegorical meaning itself. Duranti’s work consists largely of such idiosyncratic, often strangely expressive drawings. 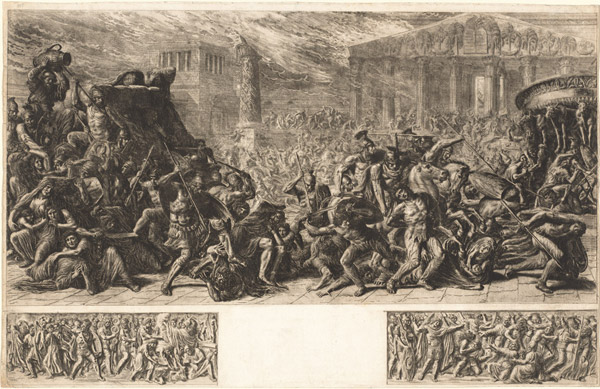 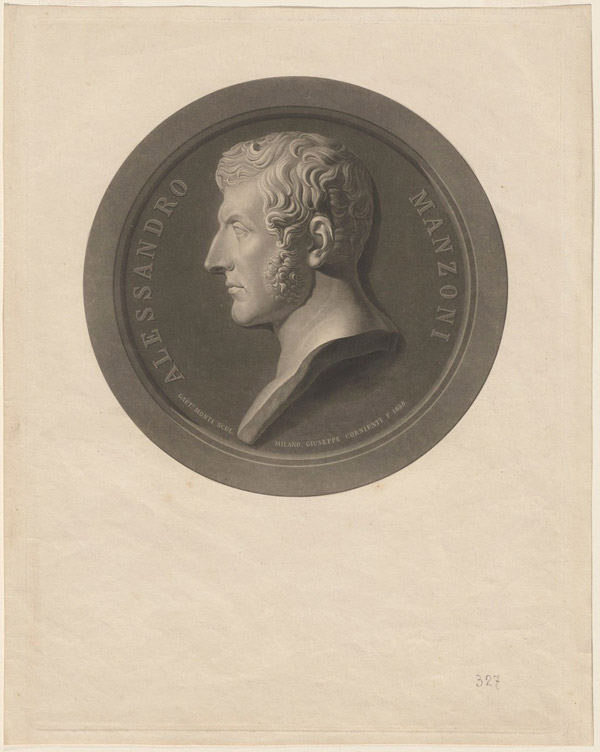 Alessandro Manzoni is generally regarded as the greatest Italian author of the nineteenth century and his principal work, the novel The Betrothed (1827), is a cornerstone of the modern Italian language. Even before its publication Manzoni had achieved fame with The Fifth of May, a lyrical poem composed upon the death of Napoleon in 1821. Its success was the inspiration for the sculptor Gaetano Monti’s marble relief portraying the author in the idealized neoclassical style made fashionable during Napoleon’s annexation of Italy (1805–1814). A quarter century later, Cornienti, an academic engraver, translated Monti’s portrait into this, his best known print. 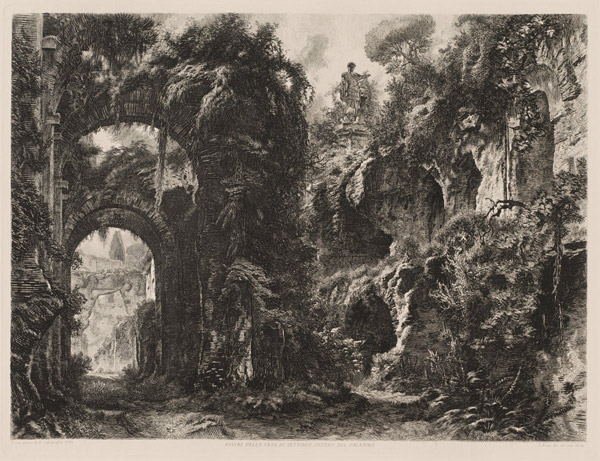 A painter of oriental themes and an occasional printmaker, Biseo created this etching in tribute to the eighteenth-century artist Giovanni Battista Piranesi. The subject (an ancient Roman monument overtaken by time), the deep perspective, and the density of line all pay homage to Piranese’s etchings of Roman ruins. The print testifies to the long and powerful grip of the past on the Italian imagination into the twentieth century.