Master Painter in the Age of Rembrandt 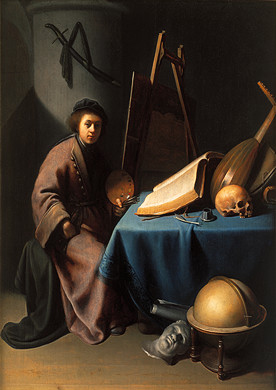 Artist in His Studio

The composition owes an unmistakable debt to Rembrandt's A Young Painter in His Studio. The monochromatic palette enlivened by a swath of greenish blue, the unmodulated application of paint, and the strong chiaroscuro are common to both paintings. Dou's artist, like Rembrandt's, holds palette and brushes, while the easel faces away from the viewer. Neither Dou nor Rembrandt depicts a particular individual but offers a generic representation of "The Painter."

Differences in the two masters' compositions are indicative of their contrasting approaches to art. Rembrandt dramatizes his scene by focusing on a few essential compositional elements, while Dou includes numerous objects to enrich the pictorial effect. Rembrandt's painter -- his face in shadow -- is dwarfed by a looming easel that dominates an otherwise barely furnished space. Dou lavishes equal attention on the painter, who gazes directly at the viewer, and the still-life components, offering a convincing and beautiful rendering of an abundance of surfaces and materials.

The sitter in this painting has been identified as Rembrandt or Dou, but his features bear no resemblance to either.

Dou's composition is filled with objects, some simply studio props. However, many of the objects depicted -- the globe, the plaster cast, the skull, the lute, the books, the sword -- were traditionally associated with the idea of vanitas, the ephemerality of life. Dou may have included these symbols of transience within his composition to contrast with the artist's achievements, which are lasting. 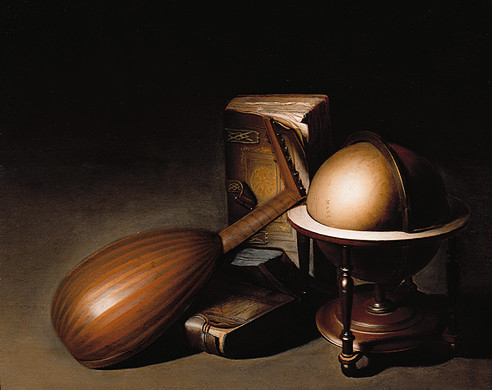 The horizontal format is unusual in Dou's oeuvre and unique among his still lifes. The picture is painstakingly executed, particularly in the rendering of the various surfaces. Alternating thin and thick brush strokes suggest the raggedness and the weight of the pages of the upright book; thin, calligraphic brushwork describes the volumes' bindings.

The conjunction of a globe, a lute seen from the back, and a ragged portfolio and books first appeared in Dou's work in Artist in His Studio. The combination of elements associated with music and study probably alludes to the intellectual and artistic life. Dou's focus on the scholarly ideal, never more concentrated than in this work, is central to many of his early paintings. 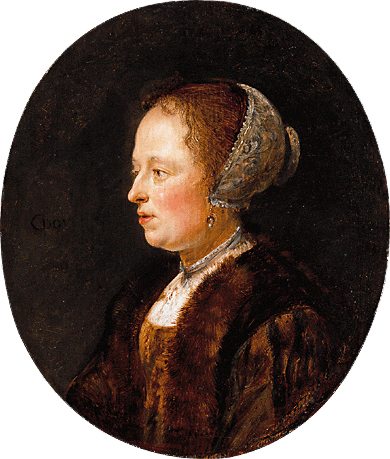 Portrait of a Woman

This painting is one of a series of small, oval, bust-length portraits and figure studies that Dou painted between 1635 and 1640. The handling of the paint, especially the contrast of the woman's delicately drawn features and the freely rendered sleeves of her fur jacket, points to a date closer to 1640. The supreme assurance in Dou's rendering of the transparent headdress and its lace decoration and the beautiful subtlety of the reflected light under the sitter's chin are hallmarks of a more confident and experienced painter. The small size of the panel, which creates an impression of preciousness, makes such virtuoso handling even more remarkable. 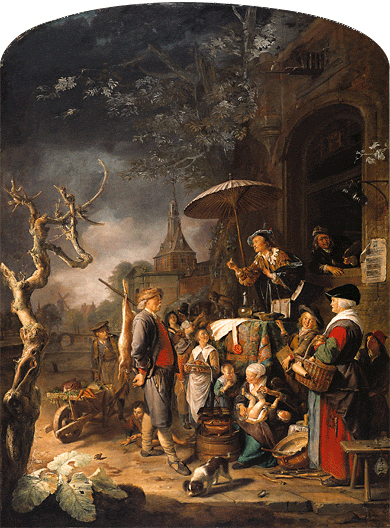 This painting depicts a quack -- a medical charlatan -- hawking his wares to a small crowd on the outskirts of Leiden. Among the onlookers are an elderly woman at the right whose pocket is being picked, a hunter who carries a dead hare hanging from his rifle barrel, a young woman who offers a coin to the quack while her companion peers at her décolleté, and a woman making pancakes who wipes a baby's bottom. A painter portrayed in the window behind the quack suggests that Dou sought to make a comparison between the two men. Both are masters of deception, yet the quack's wares have no value, while the painter's creations edify the mind and please the eye.

The ideas that The Quack represents -- that painting is intended to delight, amuse, deceive, and instruct -- were central to Dou's art. Its large scale and complex subject make it an artistic manifesto of sorts -- one in which Dou displays his virtuosity while commenting explicitly on the role of the artist. 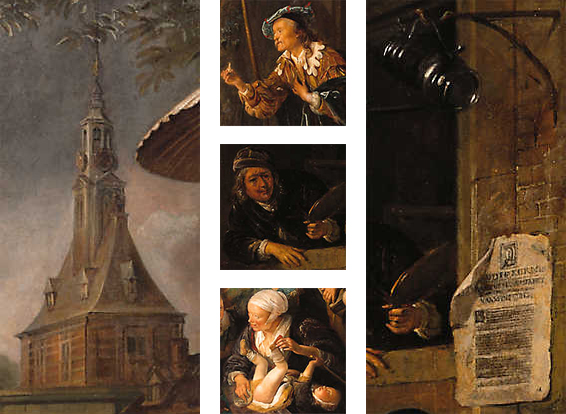 The building in the background -- the Blauwpoort (Blue Port) -- marked the city limits of Leiden. It did not assume the form in which it is shown here until 1667, fifteen years after Dou dated the panel. It seems probable that Dou began the painting in 1652 and reworked it at a later date to include the renovated form of the Blauwport's tower.

The tankard hanging above the paper tacked to the brick wall in the foreground identifies the building as an inn and suggests the freedom and license enjoyed at the annual fair.

The quack is distinguished from Dou's other representations of doctors by his ruffed collar, slashed sleeves, cape, and wide beret.

From an arch-shaped window, a painter with Dou's features, holding a palette and brushes, addresses the viewer. By including himself as a spectator, the artist encourages us to see ourselves as part of the crowd.

A woman wiping her baby's bottom is a motif often used in contemporary prints and literature to signify deceit. 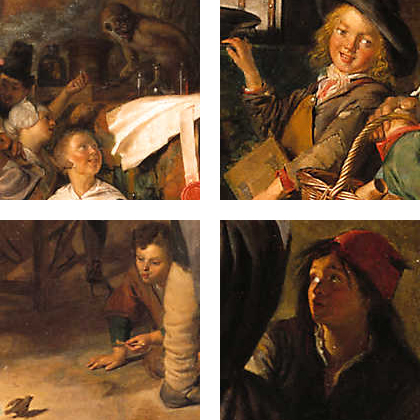 The onlookers clearly occupy a social stratum below that of the painter and his patrons. Their activities have both comic and disturbing overtones: a pickpocket takes advantage of an older woman's inattention; a schoolboy neglects his studies; several children look up at a monkey on the table; and a young boy lures a bird in an action that mimics that of the quack. 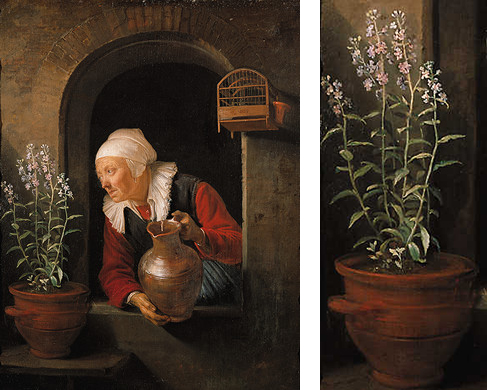 Old Woman with Jug at a Window

Dou uses a compositional arch as a functional window in this painting, with an old woman leaning out to water a pot of flowers placed on a bench just under the sill. The theme is rare in seventeenth-century Dutch painting prior to Dou's treatment; the many copies and versions of Dou's composition attest to its subsequent popularity. 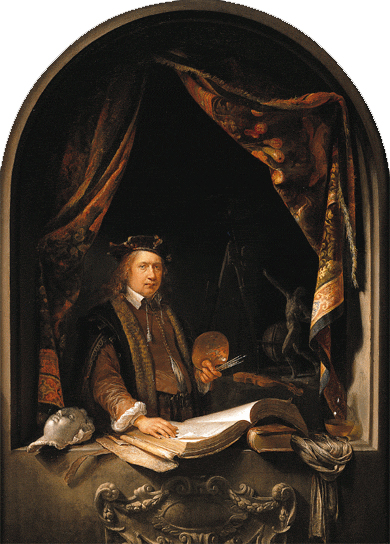 In this self-portrait, Dou depicts himself in an artist's studio holding a palette and brushes and studying a large open book. He is no ordinary craftsman, but an artist whose intellectual works are the means by which he will triumph over his own mortality. The painting's illusionism is enhanced by the objects on the window ledge -- the plaster cast, the book, the sash -- that seem to project into the viewer's space. The emphasis on Dou's artistry is intended both to delight and to prompt speculation about the relationship between the real and the represented worlds.

Dou has clearly situated himself in an artist's studio, as is evident from the easel, the figure on the table behind him, the plaster cast on ledge, and the palette and brushes in his hand.

Like his costume, many of the objects in the painting carry connotations related to the ideas of studium and vanitas. In addition to their associations with learning, the violin, books, and globe were all common symbols of ephemerality. 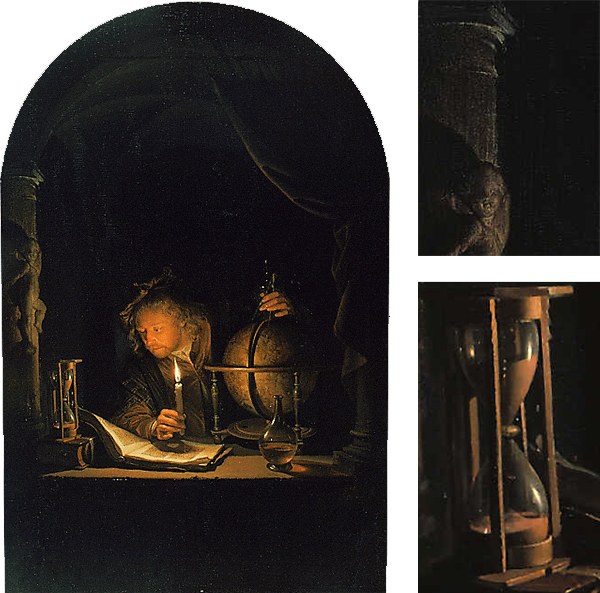 Like Vermeer's Astronomer, Dou's painting shows a man, with a globe close at hand, who is seated before an open book, probably a treatise on geography or astronomy. Armed with a compass and guided by the volume before him, Dou's astronomer is a personification of the pursuit of knowledge.

The stone surround in this painting functions as a ledge and a pictorial framing device rather than as a window. The columns silhouetted against the dark background create the effect of a very deep space.

The hourglass at the figure's left, like the compass, was a common attribute of both geometry and astronomy. In addition, it serves as a reminder to make good use of time. Here the emphasis is on the assiduousness of the astronomer, who is hard at work late into the night. 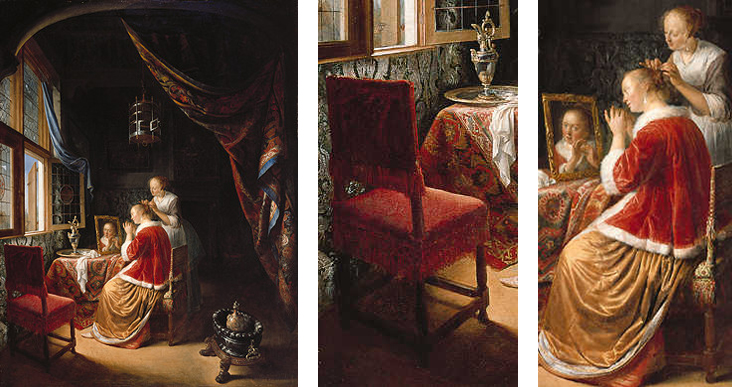 Lady at Her Toilet

Dou's painting presents the typical "upper-class" subject of a woman primping before a mirror as her maid dresses her hair. The refined surroundings, which reflect the influence of Vermeer, Gerard ter Borch, and Frans van Mieris, include a luxurious tapestry curtain, a richly upholstered chair on which the woman sits, tooled leather wall hangings, an elaborate ewer and basin, a marble wine jug and footed cooler.

The cooling wine and the chair positioned as if to receive a visitor suggest that the theme of the painting is seduction. But who is the lady seducing? Through her reflection in the mirror she glances directly at the viewer, who might be seduced as well by the beautiful surface of the painting. The figure of a woman before a mirror was traditionally associated with pride and lust. The open birdcage, a conventional symbol of immorality, is positioned directly above the lady's head at the center of the composition.

The subject of the hermit is one that Dou borrowed from Rembrandt at the beginning of his career and returned to at the end of his life. The artist has ably captured a range of materials and textures. The wrinkles of the hermit's hand are painted in small, regular strokes of powder blue, pink, and ocher. The grasses that grow from the water at the bottom of the panel are painted in single, tapering sweeps of the brush, as different from one another as the grasses they describe. White highlights on the overturned earthenware jug suggest both the reflection of light and the working of the clay. Dou's characteristically fine brushwork is both spirited and free.

The painting is replete with symbols alluding to the vanity of life, the constancy of the hermit in his devotions, and his eventual triumph over death through meditation and prayer. The latter is underscored by the flowering branches that sprout from the dead tree stump at the right.

X-radiography indicates that Dou altered the position of the open book. This revision shows the importance that Dou attached to the book in this. Certainly, the emphasis on the written word was a significant component of Protestant belief.