Let the World In: Prints by Robert Rauschenberg from the National Gallery of Art and Related Collections 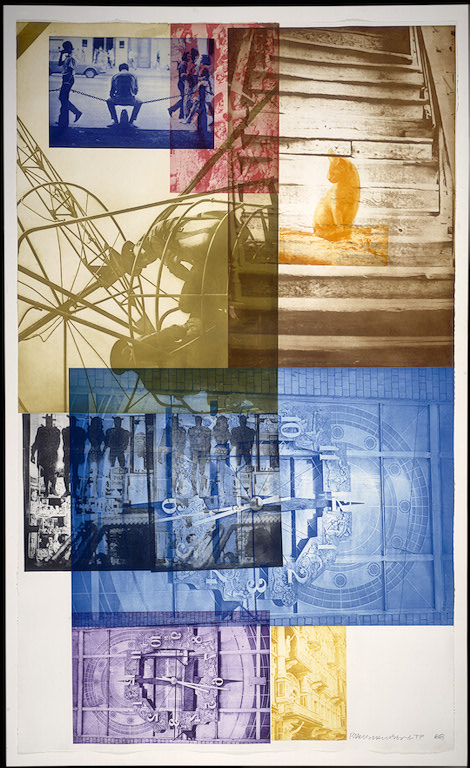 Beginning in the early 1960s, Robert Rauschenberg (American, born 1925) created painterly prints filled with images he clipped from newspapers and magazines. Nearly a decade earlier he had countered the introspective canvases of abstract expressionism with works he called "Combines," fusions of painting and sculpture that incorporate everyday items and embrace the cacophony of daily life. Rauschenberg's prints likewise introduced the commonplace in varied forms—a water ring left by a drinking glass, an embossment from a coin, or the traced outline of a walking cane. The artist's welcoming of representation back into the avant-garde restored a potent visual vocabulary. As art historian Leo Steinberg noted, "What he invented above all was...a pictorial surface that let the world in again."

Rauschenberg's open-ended approach helped steer fine art print studios in new directions. Working collaboratively with talented printers, he challenged the limits of methods and materials: rethinking customary approaches to lithography, screenprint, and intaglio; adopting new processes such as digital imaging; and printing on unconventional papers, cardboard, fabric, and plastic. Rauschenberg's foray into printmaking was a seemingly natural development, for imprinting—the very essence of printmaking—had long played a role in his work, in the form of fingerprints impressed in his paintings and magazine images transferred to drawings. Publisher Tatyana Grosman of Universal Limited Art Editions (ULAE) on Long Island, New York, was the first to invite Rauschenberg to make prints. He accepted the invitation in 1962, and his relationship with that atelier continues to the present. 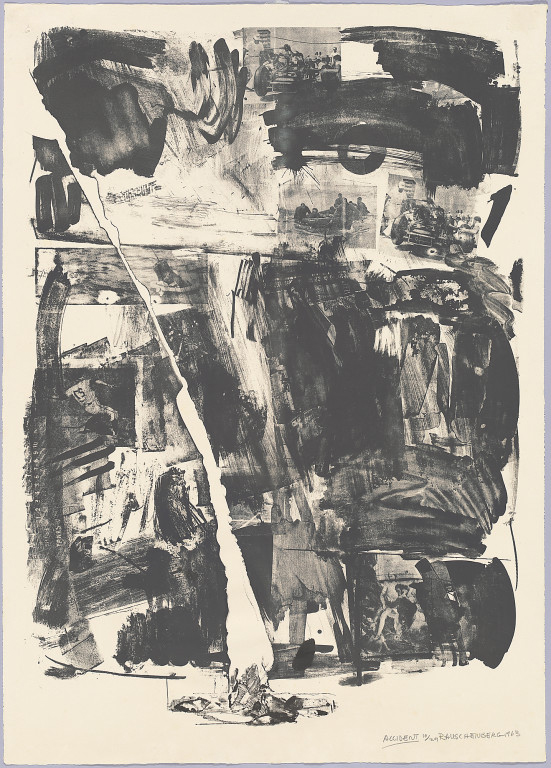 Rauschenberg's embrace of the unexpected and his adeptness at turning chance to an advantage are underscored in his early ULAE print Accident. He produced only a handful of impressions before the lithographic stone broke in the course of printing. Rather than start again on another stone, he welcomed the rupture — visible as the long diagonal crack that bisects the final edition impression — and further embellished the image with scavenged limestone chips inked and printed in the lower margin. By titling the work Accident, Rauschenberg drew attention to the eccentric act of printing from a broken stone. By granting status to a random act, he was adapting strategies comparable to those of his colleague, the composer John Cage, who incorporated random tones and intervals into his musi­cal compositions. When published, Accident garnered first prize in a major international print competition and brought unprecedented attention to an artist and atelier from the United States. 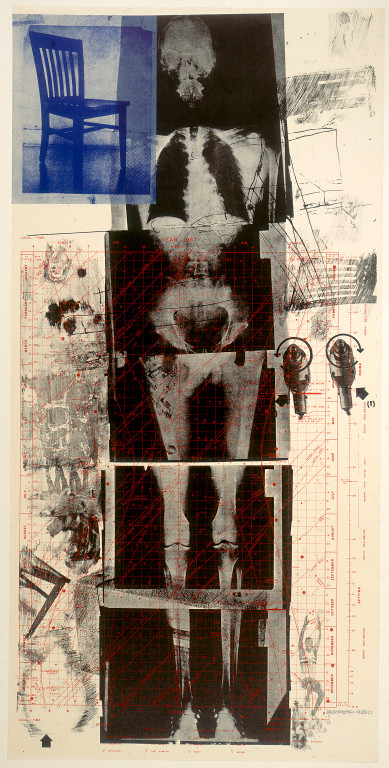 Technology and the News

Rauschenberg frequently explored modern technology as both a tool and a motif in prints of the late 1960s. Booster from 1967 is an innovative self-portrait that features a life-size column of x-ray images representing Rauschenberg's body. Produced at Gemini G.E.L. (Graphic Editions Limited), a Los Angeles print workshop known for harnessing new techniques and materials for creative ends, the six-foot lithograph and screenprint was at that time one of the largest hand-pulled lithographs ever made. With its impressive scale and commanding presence, Booster challenged the dominance of painting as a medium.

After witnessing the launch of the Apollo 11 mission to the moon in the summer of 1969, Rauschenberg created his Stoned Moon Series: thirty-four prints produced at Gemini G.E.L. that integrated diverse brush and crayon strokes with NASA photographs, maps, and blueprints. The series culminated with Sky Garden, a brilliantly colored print whose scale was even larger than that of Booster.

In a series from 1970 entitled Currents, Rauschenberg turned again to world events and politics, examining that period's turmoil as reported in contemporary newspapers. Taking a sparer approach than in his previous prints, the artist abstained from gestural mark-making and based his composition on fractured grids made up of headlines, news stories, and news photographs. Originally realized as collages, the images were issued as two series of screenprints entitled Features from Currents, in which the text is generally legible, and Surface Series from Currents, in which the text is dark and obscured with interference patterns and reversals. 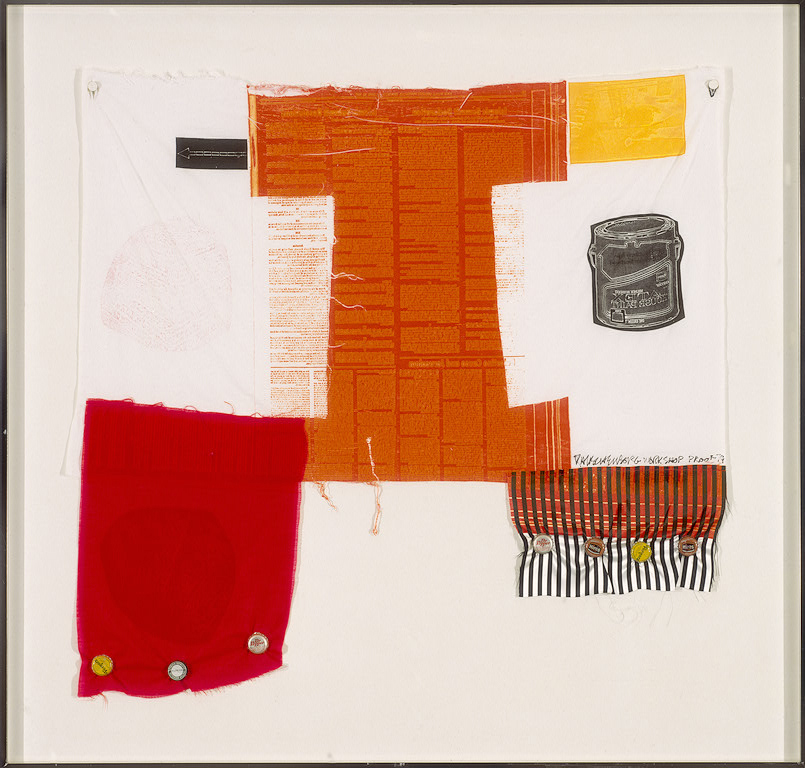 Rauschenberg moved to a Gulf Coast home in Captiva, Florida, in the early 1970s and established his own print facility, Untitled Press. He also began working with a print shop a hundred miles to the north, Tampa's Graphicstudio U.S.F. (University of South Florida). The artist's Airport Series, published by Graphicstudio in 1974, was printed in Rauschenberg's Captiva shop. The series title derives from an incidental event—that is, as a matter of convenience he signed the edition at a Tampa airport hotel. Cat Paws from the series challenges the modern printmaking standard that all prints in a given edition are identical: each print's fabric supports, with different sheens and textures and varying capacities to absorb ink and with unique folds and frayed threads, caused variations from impression to impression—variations that were anticipated and encouraged by the artist. Rauschenberg also attached actual bottle caps to the individual prints, furthering each one's uniqueness.

In the series Hoarfrost Editions, printed and published in 1974 by Gemini G.E.L., Rauschenberg extended the notion of variability. The series title refers to the crystalline coating of ice called hoarfrost and evokes the prints' delicacy. Preview features images of a Greek sculpture flanked by two vintage automobiles, icons of different eras. For this print and others in the series, Rauschenberg selected photographs from magazines and newspapers that were enlarged and transferred as images to various fabrics. Subsequently, crumpled newspapers dampened with solvent were placed on top of the printed cloth and run through the press under extreme pressure so that the newspaper ink transferred irregularly and uniquely to each print. Sewn in overlapping layers, the plain-weave textiles — cheesecloth, muslin, silk chiffon, silk crêpe, and silk taffeta — function like multilayer pictures, allowing for alternative readings as the viewer moves or the fabrics shift in response to the slightest breeze. 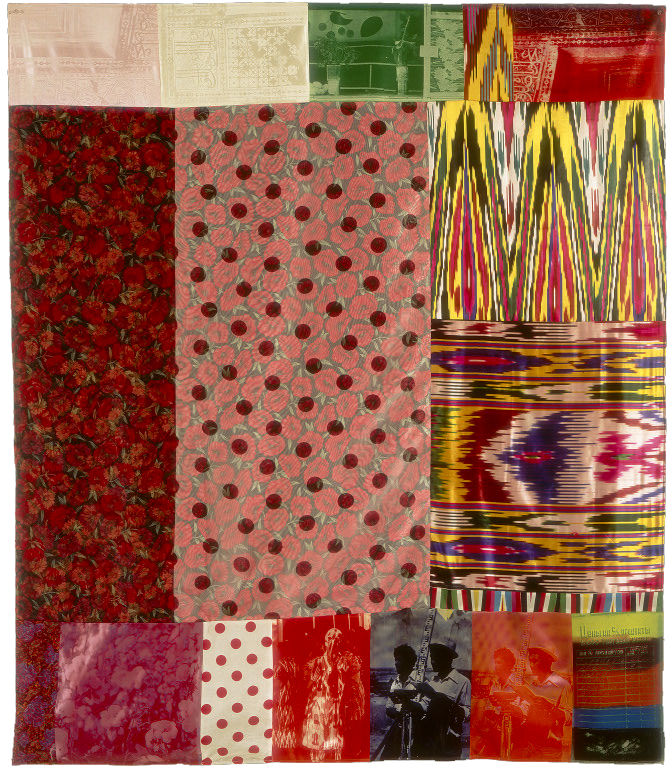 Travel has prompted Rauschenberg to experiment with a host of uncommon art materials, some exotic and others so familiar as to be often overlooked. In 1952 he visited Morocco and Italy, where he used the cardboard packaging found in men's laundered shirts as the support for collages composed of printed and cut papers, ribbons, feathers, and other discarded or surplus items—scrappy mergers of figurative and abstract elements that anticipated his subsequent Combines. Almost forty years later, in 1990, Rauschenberg revisited these works in the Shirtboards portfolio: twenty-eight meticulous replications of the 1952 collages. Printed by Styria Studio in New York using lithography and screenprint, the Shirtboards are fifty percent larger than the original works but otherwise are faithful to their models, mimicking even the glue stains and wrinkles of the originals.


Travel also has spurred collaboration and cultural exchange with artists and craftspeople abroad. Rauschenberg is committed to international peace and believes that "one-to-one contact through art" can be an effective tool in bridging differences. In 1984 he launched Rauschenberg Overseas Culture Interchange (ROCI), a massive undertaking in which photographs, paintings, sculpture, and videos were created and exhibited in eleven countries, from Mexico to Malaysia, and culminated in a 1991 exhibition at the National Gallery of Art, Washington. Included within the ROCI project was the series of prints entitled Soviet/American Array, which brought together photographs he took in the Soviet Union with ones he took in the United States, symbolically connecting cultures that long had been at odds. 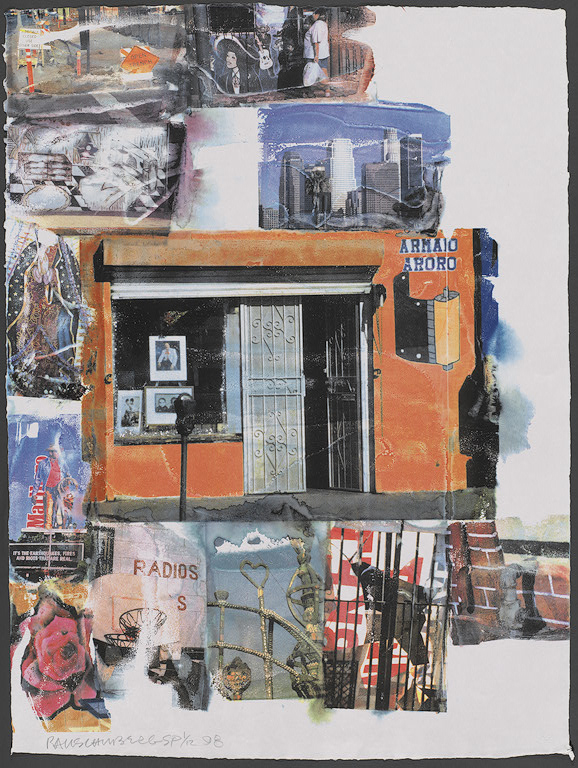 Masterpieces from Venice to L.A.

Rauschenberg often integrated photographs of everyday subjects with images of great works of art from the past. His Bellini series, printed and published by ULAE in 1987, includes some of the most beautiful examples of this type, featuring allegorical figures of virtue and vice adapted and enlarged from paintings by the Venetian Renaissance master Giovanni Bellini (c. 1430/1435 – 1516). Rauschenberg discarded many of the paintings' landscape backgrounds, replacing them with his own photographs. Indeed, partly because copyright issues were inhibiting his use of found images, around 1980 he began to use his own photographs almost exclusively in his art. In Bellini #2 the figure of Fortune-Melancholy with attendant putti is set among Rauschenberg's photographs of buildings, landscape, and architectural details. His skill as a colorist is apparent, revealing the influence of the great color theorist and artist Josef Albers, who was one of his teachers at North Carolina's Black Mountain College in the late 1940s.

An effective method of reproducing photographs in fine art prints is photogravure, a process regularly used by Rauschenberg since the 1980s in prints made at ULAE. Photogravure is an intaglio process, meaning that depressions of varying depths are etched into a metal plate. These hollows hold the ink that is pressed onto the print support. Although photogravures can capture extremely fine detail, the procedures for coaxing rich, clearly articulated tone from the random-grain pattern on the photosensitized plate are difficult to master, especially if multiple plates are to be inked and aligned. The Bellini prints from 1987 used numerous color plates, each printed to produce a distinct image in broad, overlapping monochromatic passages. Street Sounds, made five years later, was far more complex, involving multiple plates in different colors, carefully aligned and printed in succession to create a full tonal range. Color photogravures of the magnitude and complexity of Street Sounds were unheard of before ULAE collaborated with Rauschenberg to develop and perfect them.

In the late 1990s Rauschenberg took to the streets of Los Angeles with his camera, seeking the extraordinary in the familiar yet often disregarded urban landscape. He documented a kaleidoscope of hand-painted murals, billboard advertisements, storefronts, street signs, and myriad other subjects. These colorful vignettes, which became the basis for a series entitled L.A. Uncovered, were originally shot on film, which was then converted to digital files at Gemini G.E.L. and printed out on paper using water-soluble inks (because of environmental concerns, Rauschenberg has moved away from oil-based inks that require hazardous solvents). The artist then laid his digital printouts face down on water-saturated artist's paper. In a variation on his early solvent-transfer drawings, he burnished the printouts from the reverse, transferring the ink irregularly onto the print support. Depending on how much water had been absorbed, the resulting images ranged from sharply detailed to fluid and diffuse. These images were later scanned and made into screenprints. 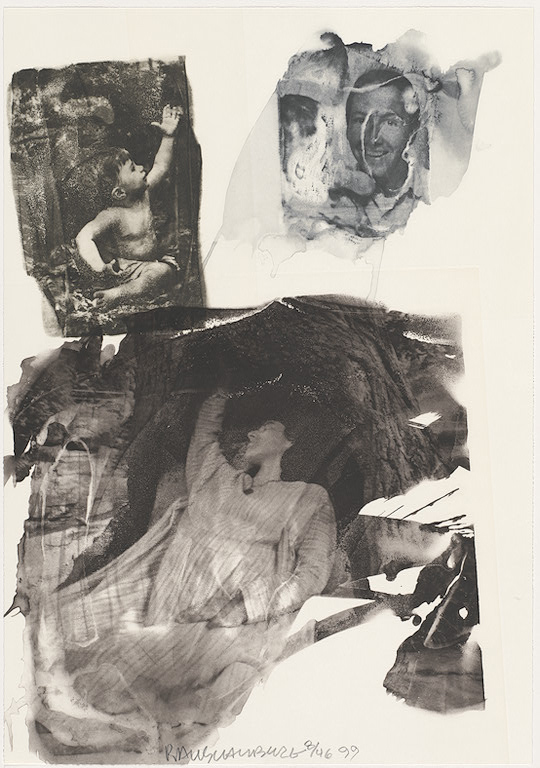 Rauschenberg's collection of old photographs of family and friends, many of which he took himself, was the starting point for his Ruminations series from 1999. The print entitled 'topher features images of the artist, his former wife Susan Weil, and their son Christopher as a young boy. The images were transferred onto photosensitized metal plates and reconstituted by brushing on photographic developer in broad, painterly strokes. The vigorous mark-making and limited tonal palette that characterized Rauschenberg's early work is reprised here with a striking innovation: whereas the early prints featured gestural marks interspersed with photographic images, the new process allows the mark and image to merge as one. The Ruminations project shows Rauschenberg at his most meditative.

Throughout his career Rauschenberg has been quick to adopt new materials and methods, and he relishes the medium's unpredictability. To his mind, the technical and mechanical aspects of printmaking afford him a healthy distance from the process, allowing for spontaneous interventions. In addition, he recognizes the power of printmaking to reach broad audiences with multiple impressions. Rauschenberg continues to reach out to the world and let the world in, offering us matchless opportunities to appreciate its strange and unforeseen beauty.