Paul Mellon and the National Gallery of Art 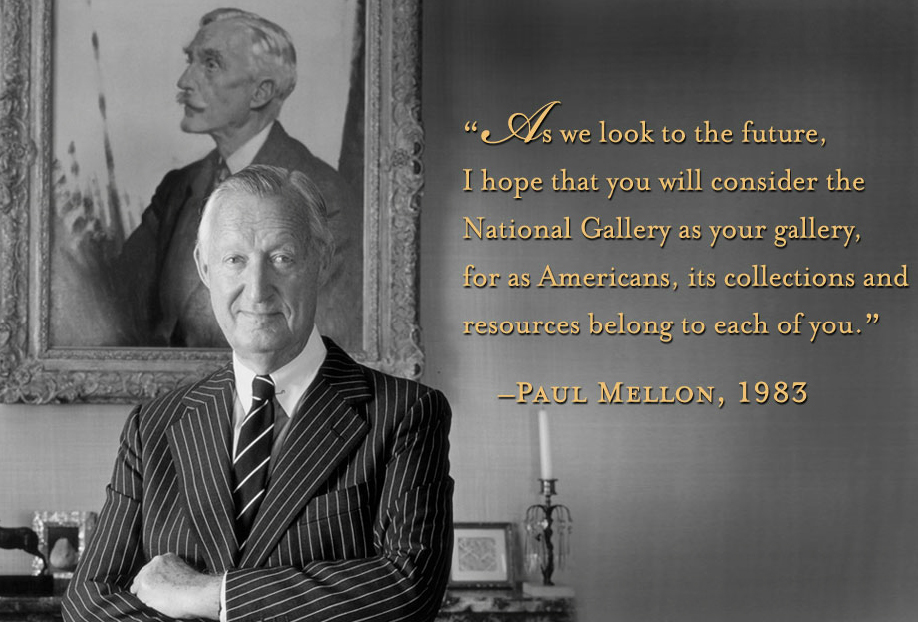 Paul Mellon in front of a portrait of his father, Andrew W. Mellon, by Sir William Orpen (1924), Photograph by H. Groskinsky 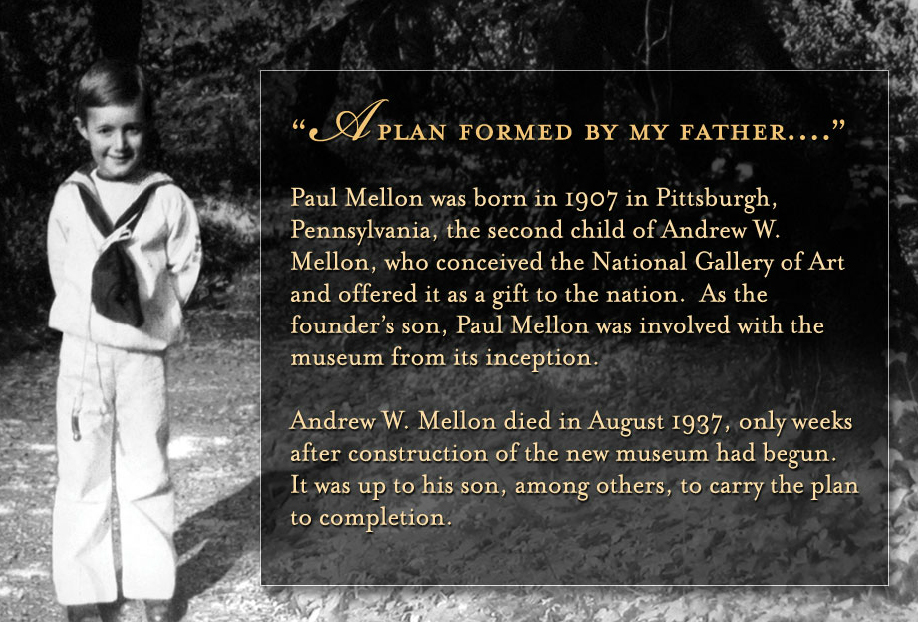 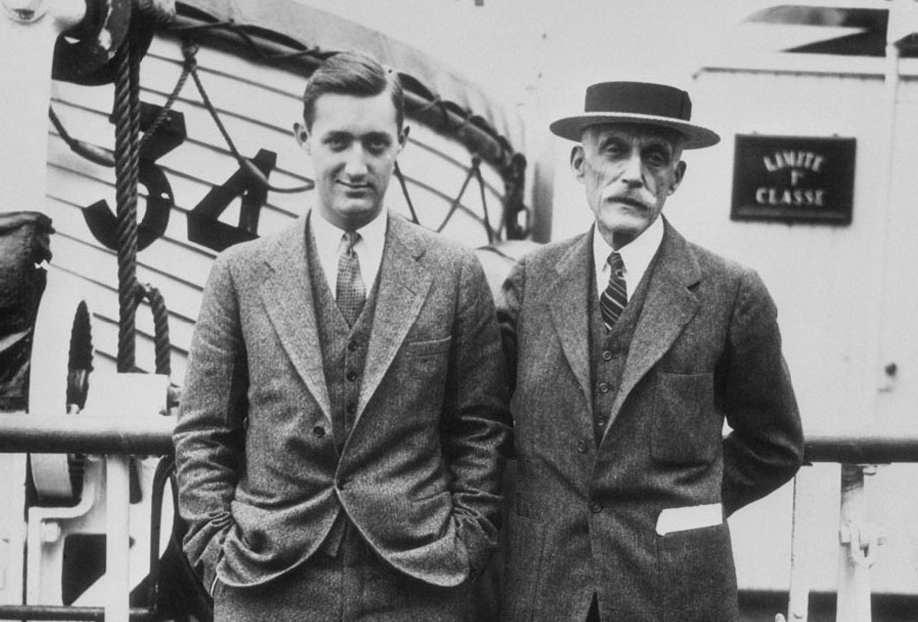 The building for the National Gallery of Art was designed by American architect John Russell Pope. Paul Mellon recalled later: "I remember showing John Russell Pope's preliminary but awe-inspiring plans and elevations to my father only days before he died in the summer of 1937, and I have always hoped that he was aware enough of them to have made him happy, and to have realized fully what a wise and generous gift he had made to the nation and to posterity." 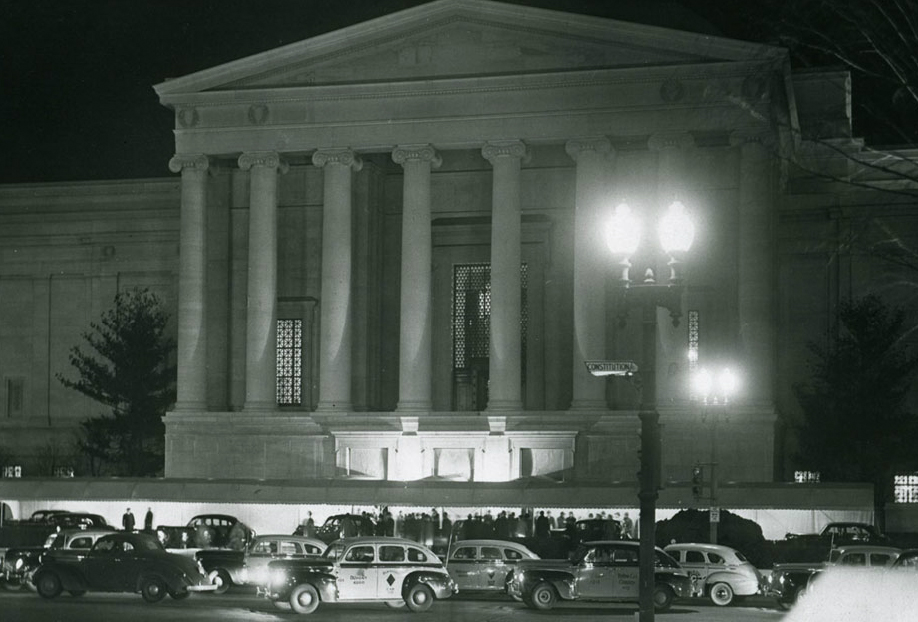 Nearly nine thousand people attended the dedication of the National Gallery of Art on March 17, 1941. Representing his father, Paul Mellon gave the museum building and the Andrew W. Mellon art collection to the United States with these words: "This building is the product of many minds, intent on giving America their best; and we are happy to turn it over to you, Mr. President, with my father's collection, to be dedicated forever to the use and enjoyment of the people of the United States." President Franklin D. Roosevelt received the gift on behalf of the American people. 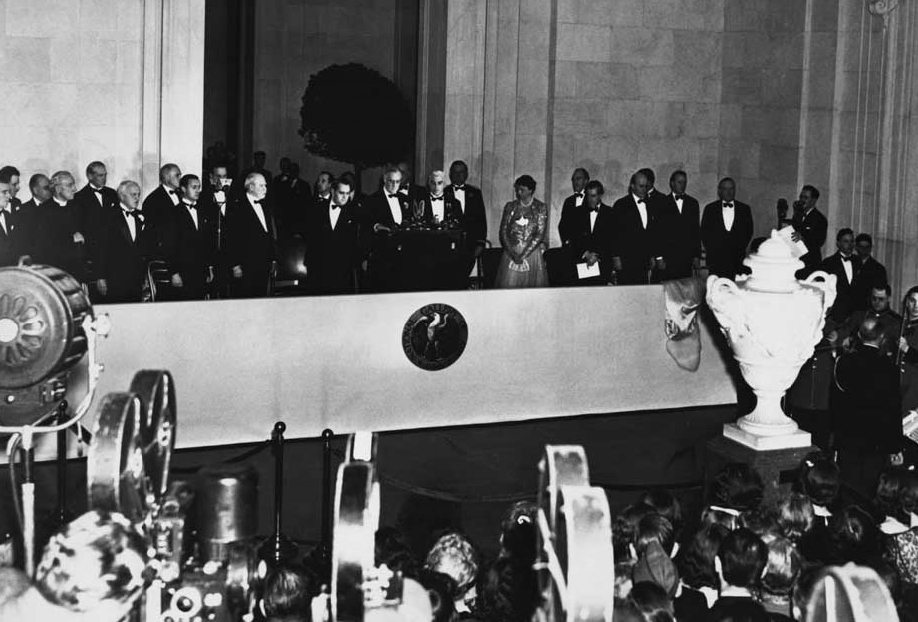 President Roosevelt at the podium during the dedication of the National Gallery of Art, March 17, 1941. Paul Mellon stands in the front row to the President's right, next to Chief Justice Charles Evans Hughes. 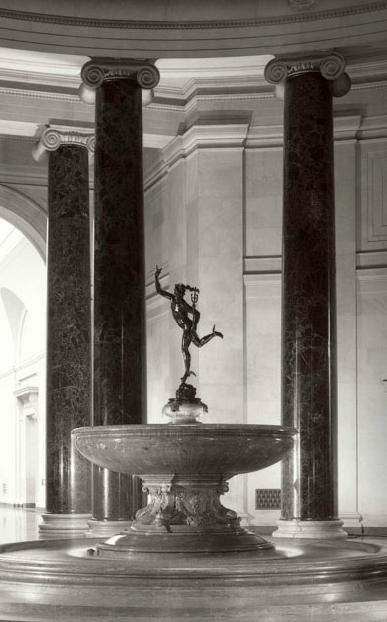 Guided by a powerful sense of duty, Paul Mellon became the National Gallery's most dignified spokesman and persuasive advocate during its first decades. 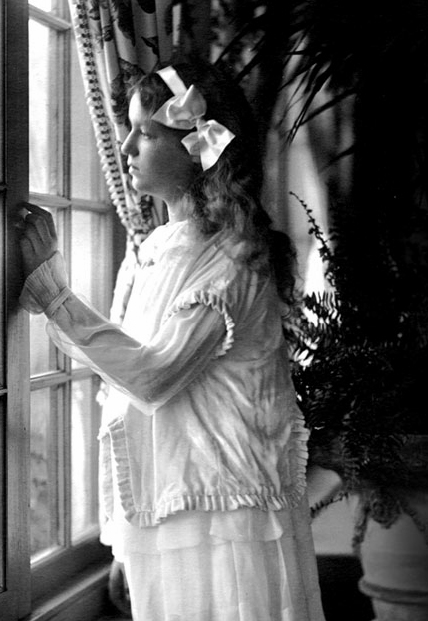 Paul Mellon was joined in his support for the museum by his elder sister Ailsa Mellon Bruce. Modest and intensely private, she was a refined collector and became one of the National Gallery's greatest patrons. 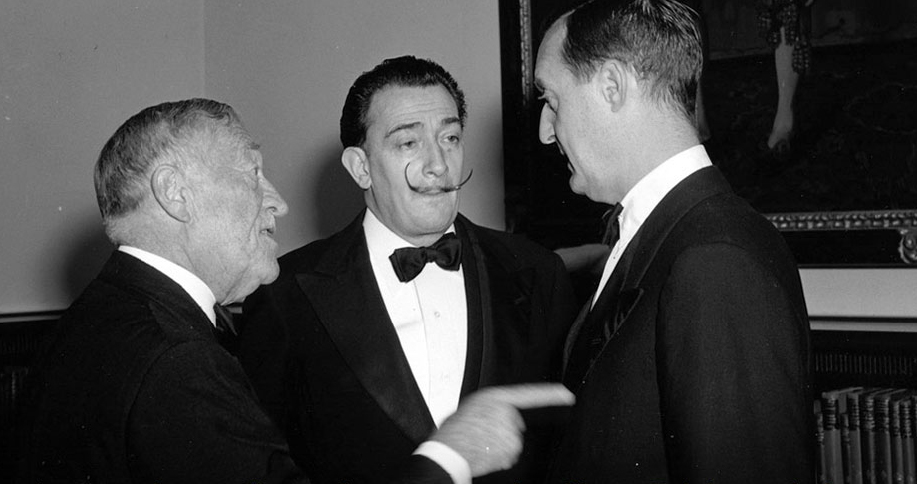 An extraordinary collector of strong personality, Chester Dale bequeathed his great collection of 269 works of art to the Gallery in 1962. 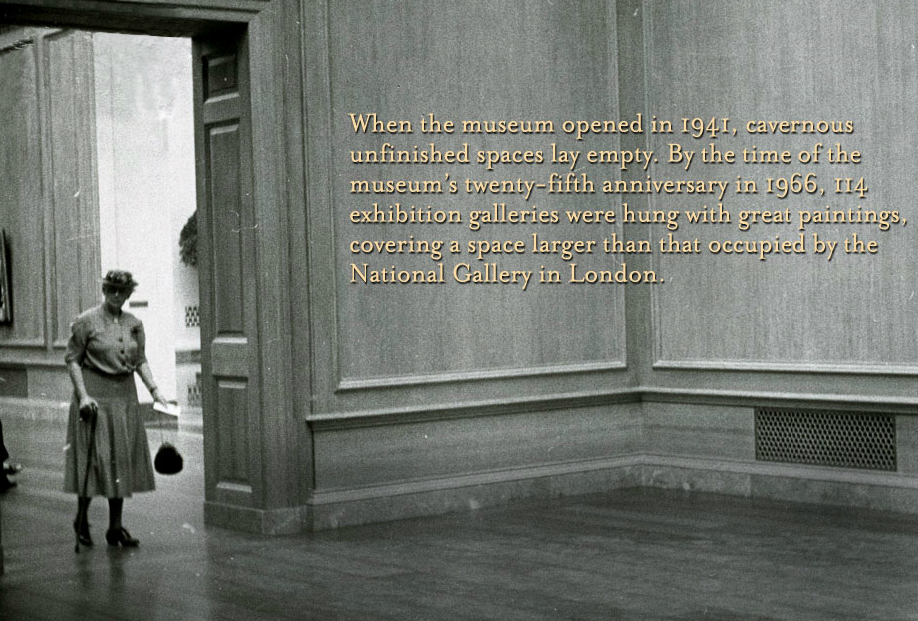 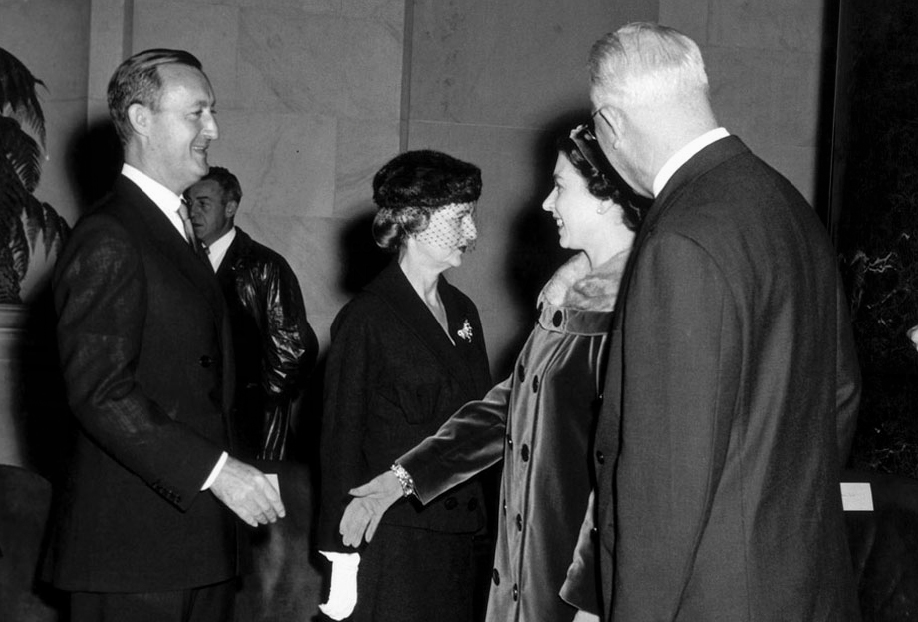 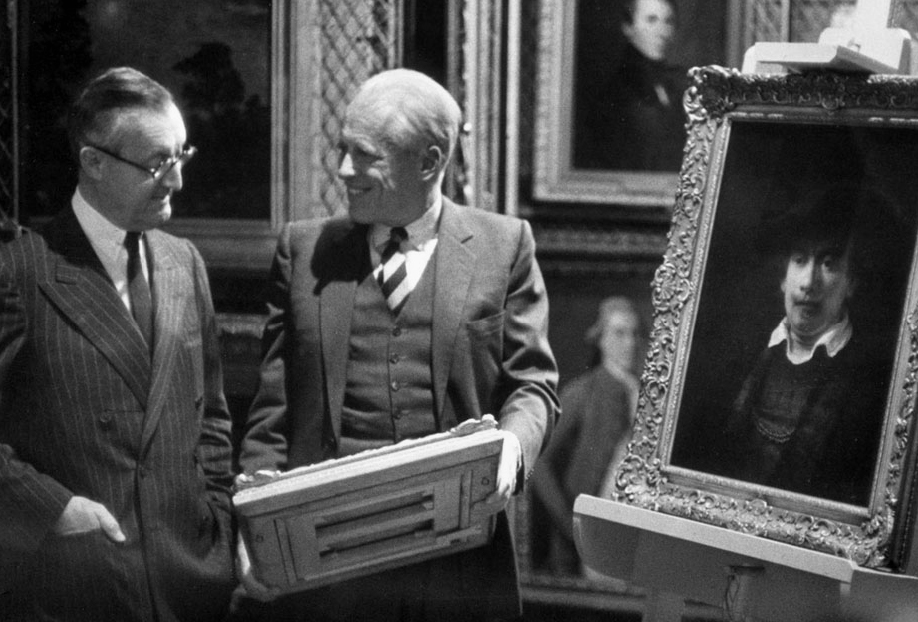 Paul Mellon and National Gallery director John Walker examine paintings to be installed in a 1967 exhibition. 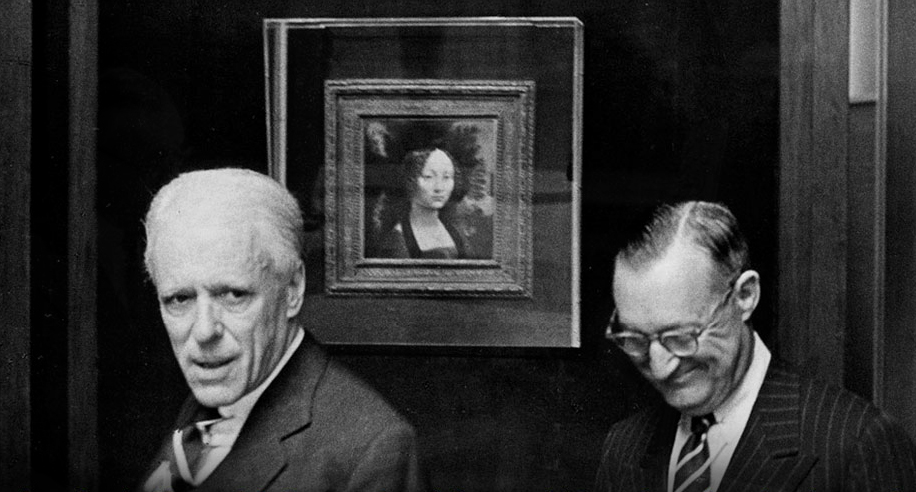 In 1967, the National Gallery purchased Ginevra de' Benci from the ruling house of Lichtenstein using funds provided entirely by Ailsa Mellon Bruce. In her modesty she declined to be identified as the source of the funds for more than a year. 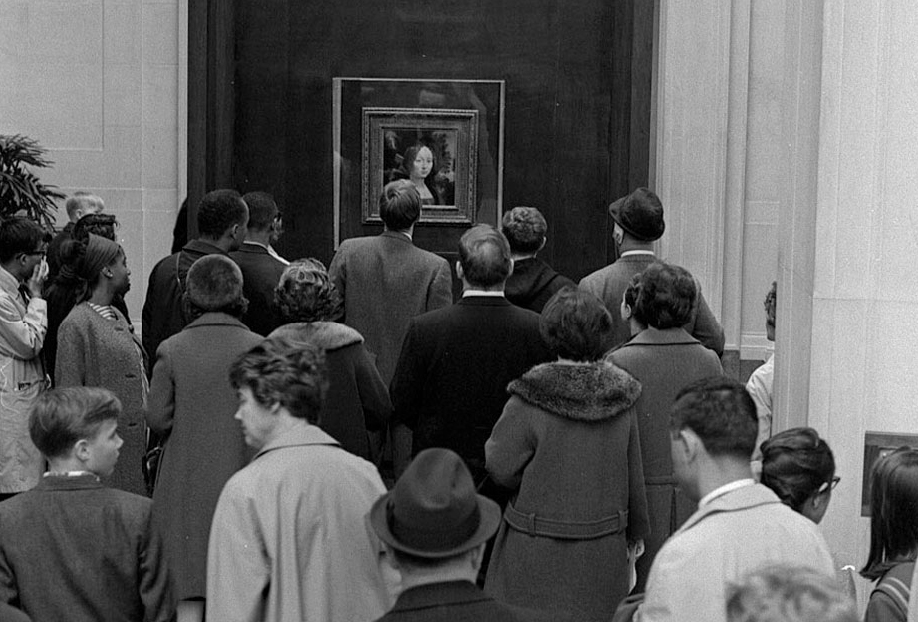 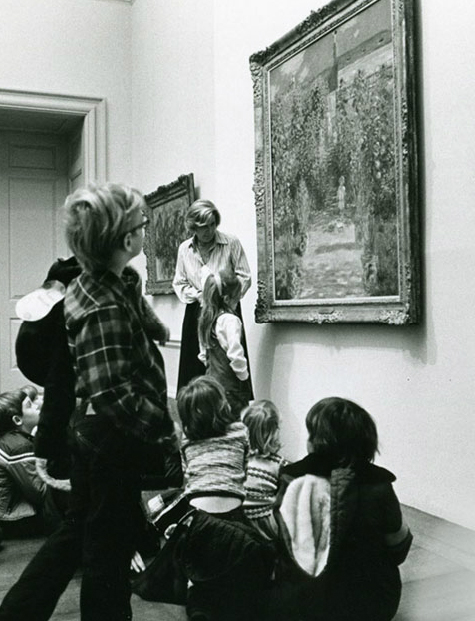 When Ailsa Mellon Bruce died unexpectedly in 1969, she bequeathed her entire art collection to the National Gallery of Art, including twenty-three paintings by Auguste Renoir, eleven by Edouard Vuillard, and others by Pierre Bonnard, Eugène Boudin, Edgar Degas, and John Singer Sargent. Funds she provided have been used by the museum to purchase more than four thousand works of art. 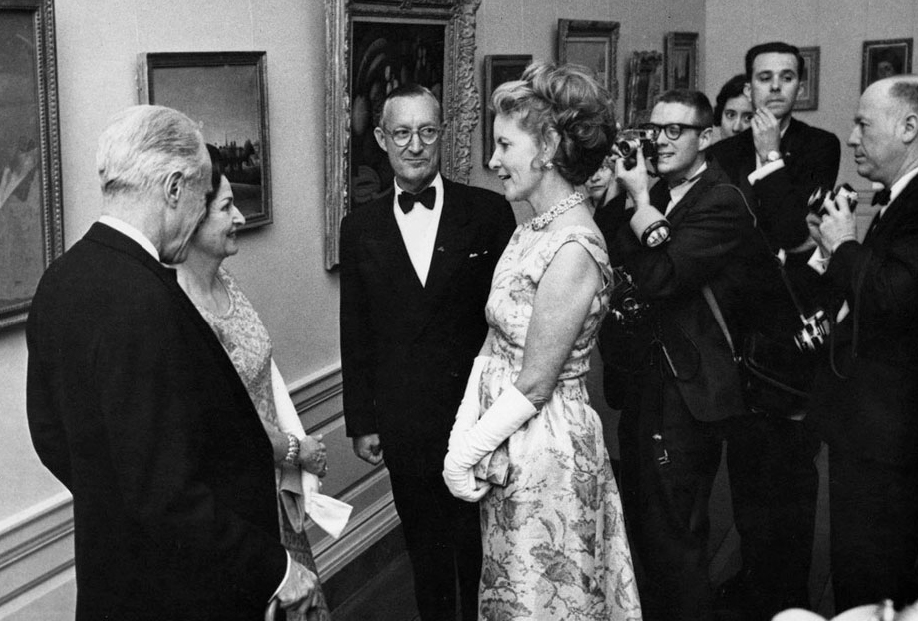 Collecting Art: "Something we loved to do..."

Soon after their marriage in 1948, Paul Mellon and his wife Rachel (Bunny) began to collect paintings to hang in their houses for their personal pleasure. He later wrote: "we began going to public galleries and those of dealers in New York and abroad - out of interest, out of curiosity - for pleasure, relaxation, education."

Paul and Bunny Mellon with Lady Bird Johnson, wife of President Lyndon B. Johnson, and Gallery director John Walker on the opening night of the twenty-fifth anniversary exhibition, "French Paintings from the Collections of Mr. and Mrs. Paul Mellon and Mrs. Mellon Bruce," March 17, 1966 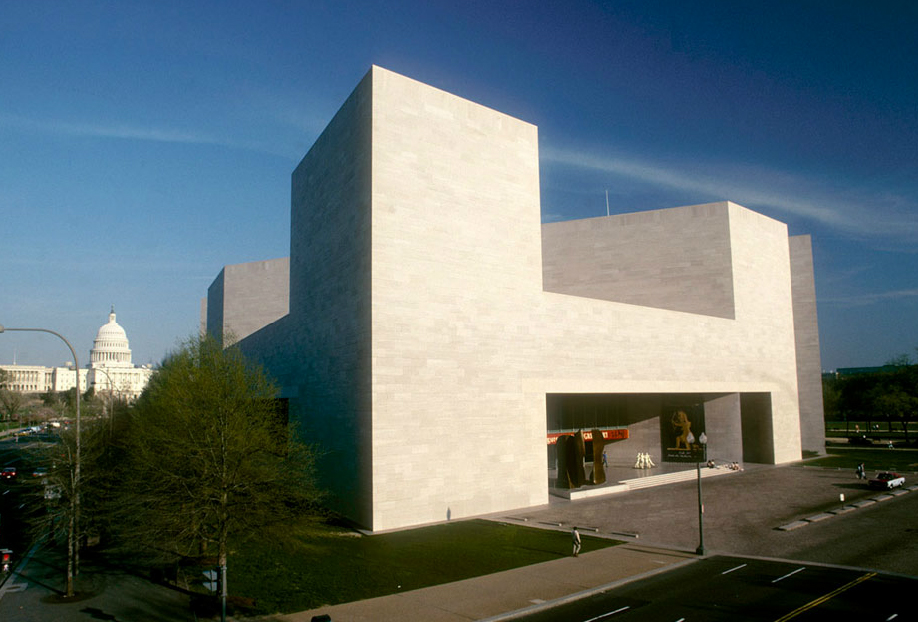 The East Building: "The generosity of the father lives on in his children..."

In 1967, Andrew W. Mellon's children recognized that the original building of the National Gallery had been outgrown, and offered to build a new structure. Ailsa Mellon Bruce died when work on the building had only begun, and it was left to Paul Mellon to oversee its design and construction. He remained proud of this accomplishment for the rest of his life: "I have commissioned a variety of works of art during my lifetime...but only one great work of art." 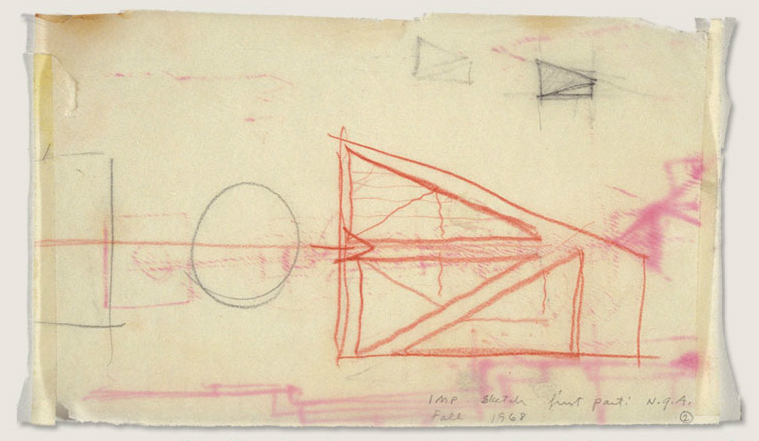 Designing a monumental building for the trapezoidal plot of land adjacent to the National Gallery's original West Building was a significant challenge. Architect I.M. Pei solved this problem by dividing the shape into two triangles: one, an equilateral triangle aligned with the central spin of the West Building for public functions and the other, a right triangle for the library, study center, and offices.

Paul Mellon (center) at the ground-breaking ceremony for the East Building, May 6, 1971 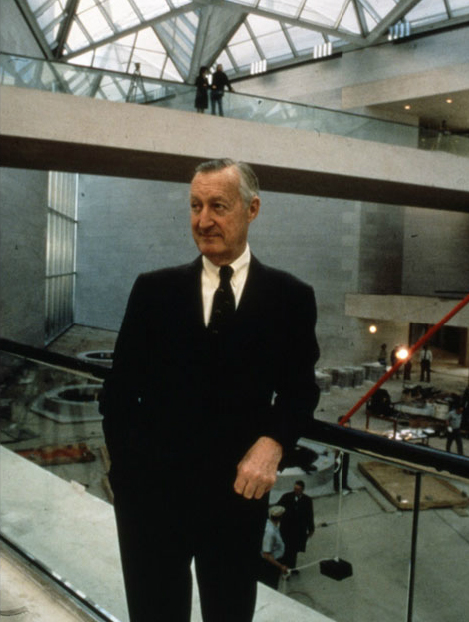 Paul Mellon was deeply involved in the process, from the East Building's inception to its dedication. The Building Committee, he recalled, "had something like seventy meetings. Everybody points out that I went to every meeting, but what happened was that they wouldn't have a meeting unless they made sure that I was going to be there!" 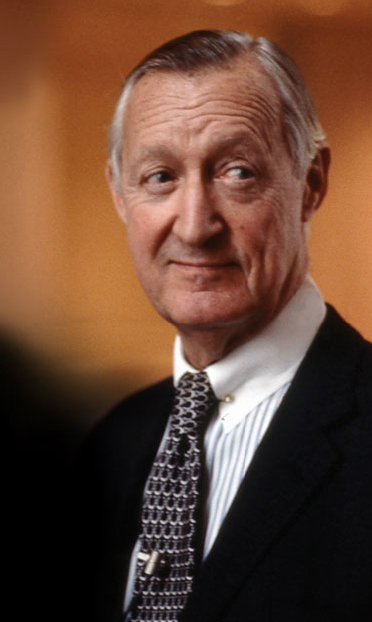 The Most Generous Donor

As the East Building was being constructed, Paul Mellon began to give the museum carefully selected individual works from the collection that he and his wife had assembled during the past decades. Over time, the pace of his gifts accelerated with large donations of masterpieces, largely nineteenth- and twentieth-century works of art. Paul Mellon gave and bequeathed to the National Gallery of Art more than one thousand paintings, sculptures, and works on paper, an extraordinary record of generosity.

Over time Paul Mellon gave the National Gallery of Art forty-eight wax sculptures by Edgar Degas, making the Gallery's collection of Degas waxes the largest in any museum in the world. 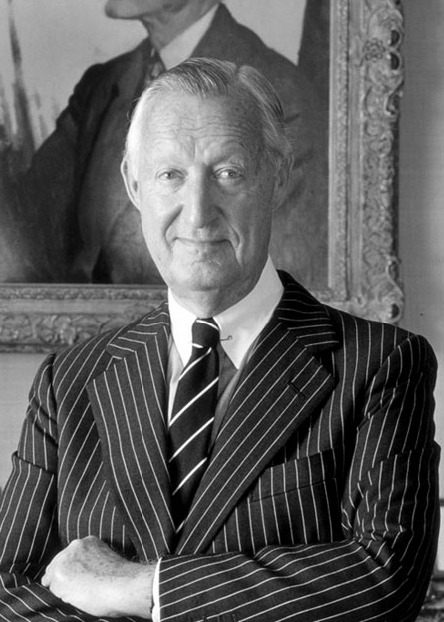 In 1985 at the age of seventy-eight, Paul Mellon resigned from his position as the chairman of the board of the National Gallery of Art. He had served as a trustee for more than forty years, including twenty-five in the offices of vice-president, president, and chairman. Throughout these years, Paul Mellon's influence on the museum's programs, collections, and institutional character was enormous. Even after his retirement, his involvement and generosity continued until his death in 1999. 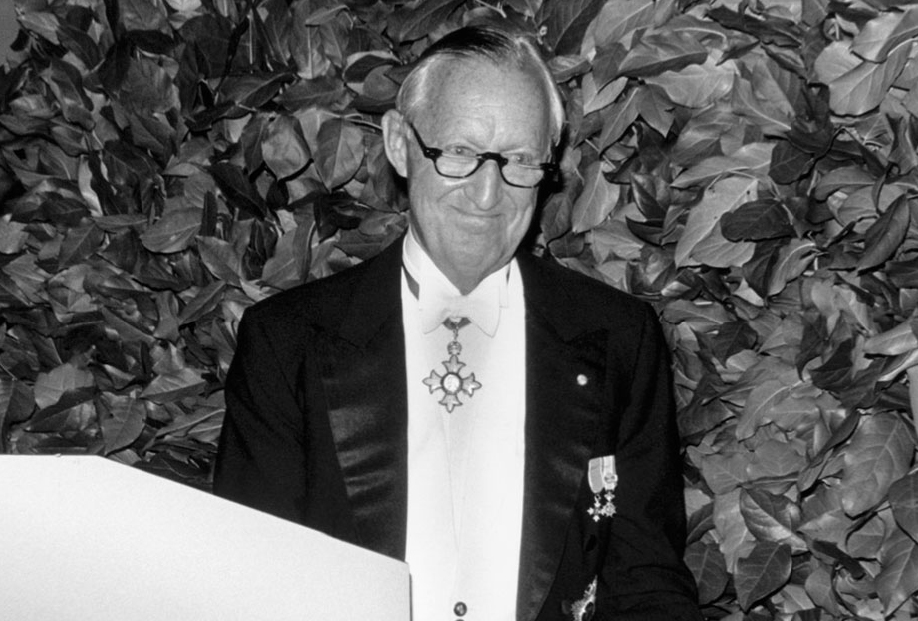 Paul Mellon at the dinner in his honor at the time of his retirement from the Board of the National Gallery, May 3, 1985. Photograph by Dean Beasom 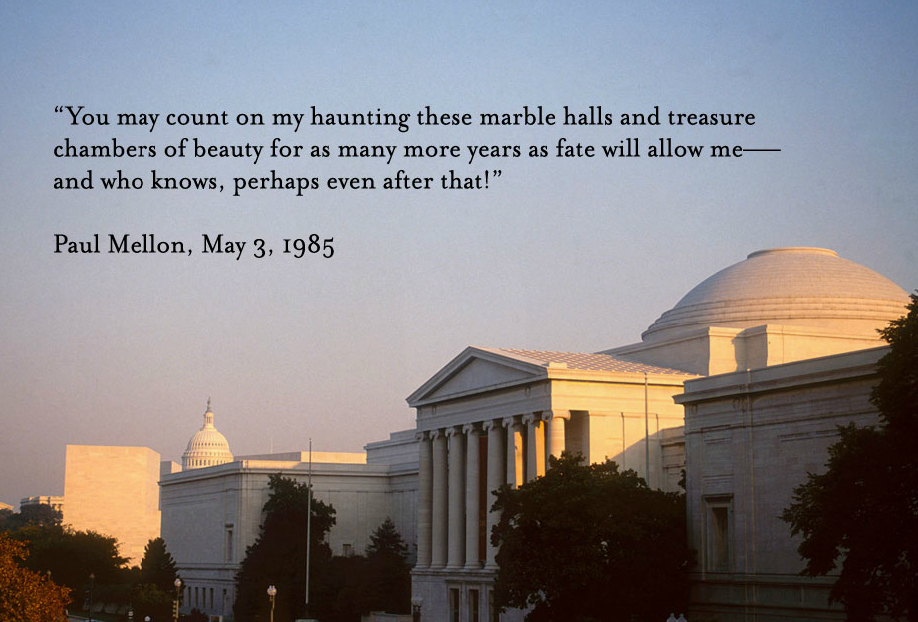