Spirit of an Age

Nineteenth-Century Paintings from the Nationalgalerie, Berlin 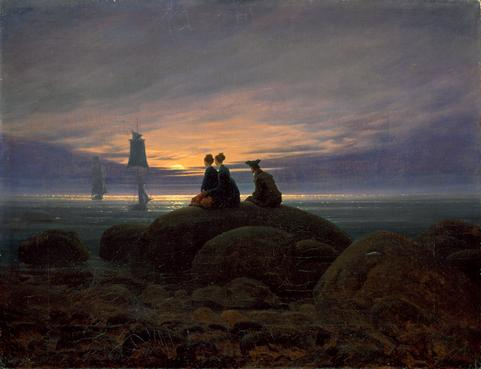 Berlin's Nationalgalerie was founded in 1861 as the Prussian national collection of modern art. By the time it opened its doors in 1876 on the Museum Island in the heart of the city, the German states had been united and the empire established, with Berlin as its capital. Thus the Nationalgalerie quickly assumed a nationwide role, and the inscription in gold letters on its monumental façade, Der Deutschen Kunst, dedicates the building "to German art." Over the years, a comprehensive collection of nineteenth-century German paintings was assembled there that today has few rivals. The temporary closure of the Nationalgalerie for restoration has created the opportunity for this exhibition of some of the finest works from the collection. 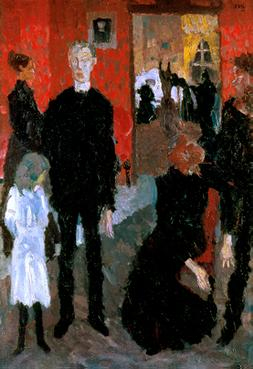 The exhibition traces the development of German painting from Caspar David Friedrich and the romantics in the early 1800s to expressionists Lovis Corinth and Max Beckmann a century later. Many artists were drawn to Italy, while others stayed at home, painting the German landscape, its inhabitants, and their folk tales and legends. At the core of the exhibition are ten paintings by one of the most remarkable artists of the age, the technically dazzling painter and indefatigable chronicler of Berlin life, Adolph Menzel.

A vital chapter in the history of the Nationalgalerie began at the turn of the twentieth century with the acquisition of paintings by the French impressionists and postimpressionists. The emperor was outraged, as were leading academic artists. Ultimately the director was forced to resign, but these great French pictures are still here, and five are included in the exhibition. They are a reminder that a century ago Berlin was one of the world's most sophisticated and cosmopolitan cities. As the capital of a reunified Germany, it is rapidly becoming so again. 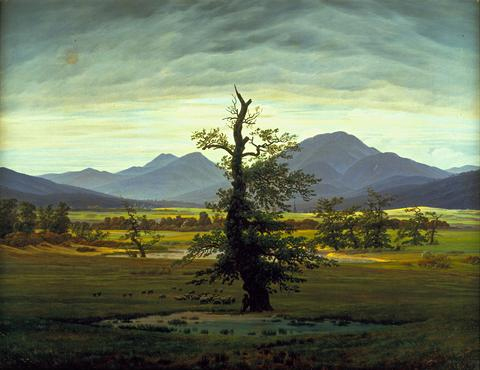 Caspar David Friedrich stands at the heart of the German romantic landscape tradition. His works derive from minute observation of nature and are often based on drawings made on walking expeditions in the countryside. The transcription of nature, however, was never his sole aim. He looked, he said, "through the inner eye," and what he saw allowed him to invest his works with poetic feeling and transcendent significance. For Friedrich, landscape painting revealed the spirituality inherent in nature and reflected his Christian faith. The figures seen from the back that sometimes inhabit such paintings yearn for a world beyond. 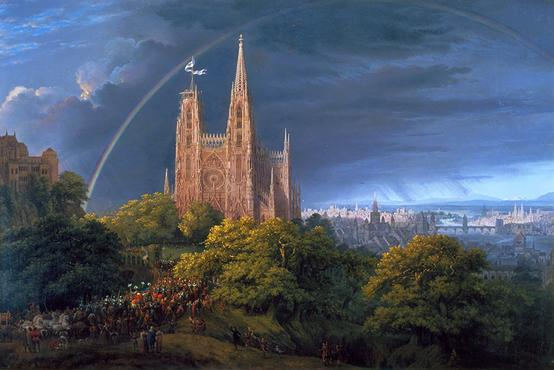 Friedrich also shared the widespread German hope for freedom and employed motifs such as massive oak trees to signify the strength of the German people. His contemporary and one of the towering European geniuses of the age, the architect and painter Karl Friedrich Schinkel, also explored patriotic themes during the years of Napoleonic occupation. His panoramic landscape paintings abound with brilliant light effects, signifying high aspiration, and are often dominated by towering Gothic cathedrals. For Schinkel, Gothic architecture was German architecture and a potent symbol for his people. 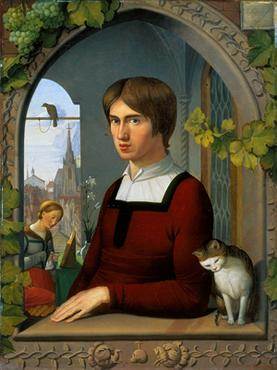 In 1809 six Viennese art students formed the Brotherhood of Saint Luke. They hoped to invest modern painting with the purity of form and spiritual values that they admired in the art of early Renaissance Italy and Northern Europe. Johann Friedrich Overbeck's portrait of the painter Franz Pforr (top right) reflects their admiration for both Raphael and Albrecht Dürer. In 1810 four of the artists traveled to Rome, and others joined them. There, they lived a devout, communal life, acquiring the name Nazarenes because they sometimes wore costumes evoking the Nazareth of biblical times. A primary commitment was to religious painting, as seen in the works of Overbeck and Julius Schnorr von Carolsfeld. Other artists, such as Joseph Anton Koch and Ludwig Richter, painted the Italian landscape in a manner reminiscent of earlier centuries. Some of these artists remained in Italy throughout their lives, while others eventually returned to Germany and became influential teachers. 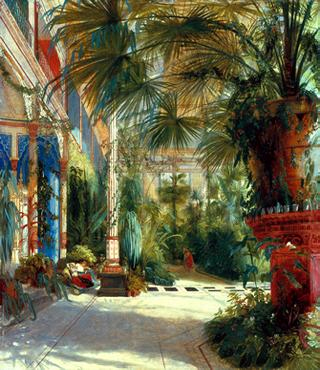 The landscape oil sketch played an important role at this time. Carl Blechen executed such sketches out-of-doors both in Germany and on his Italian visit of 1828-1829. He did not, however, consider them "finished" paintings, which tended to be larger in scale. The luminous delicacy of Blechen's oil sketches carried over into his painting of the interior of the Palm House near Potsdam. Designed by Schinkel, this sunny, glass-enclosed space housed the palm collection King Frederick William III of Prussia had purchased in Paris on the advice of the great Prussian naturalist Alexander von Humboldt. 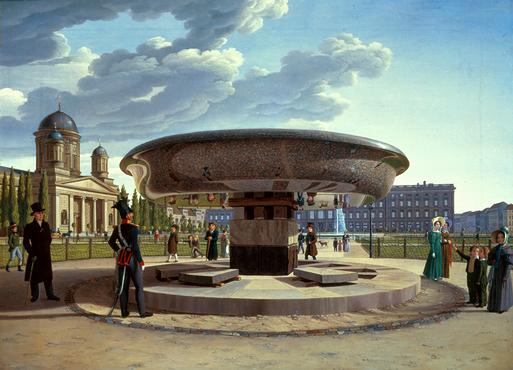 The years between the defeat of Napoleon in 1815 and the revolutions of 1848, known as the Biedermeier era, were a time of relative peace, prosperity, and innovation in German-speaking Europe. The art of the period came to be characterized by what a critic of the day called "rigorous simplicity." In painting, emphasis was given to the objective recording of natural phenomena, and artists sought to achieve an enamel-like finish that masked individual brushstrokes. Landscape and portraiture grew in importance while history painting declined. 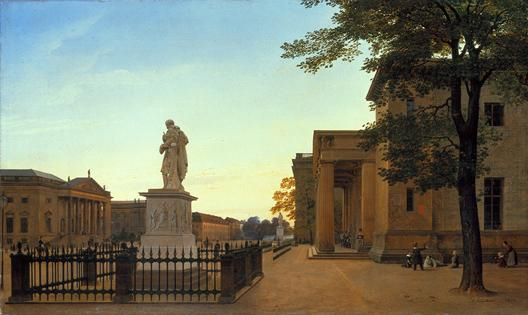 Berlin was expanding rapidly, growing to fulfill its role as a major European capital. Imposing new public buildings by Schinkel and his disciples were being constructed. Painters like Eduard Gaertner and Johann Erdmann Hummel chose Berlin as their subject, carefully depicting the architectural and technological wonders, like the huge granite bowl that adorned the center of the city (top left). They also turned their attention to the magnificent boulevards, as in Gaertner's view of Schinkel's Neue Wache (New Guardhouse), whose Doric portico faces Unter den Linden, the city's most elegant promenade and parade ground. 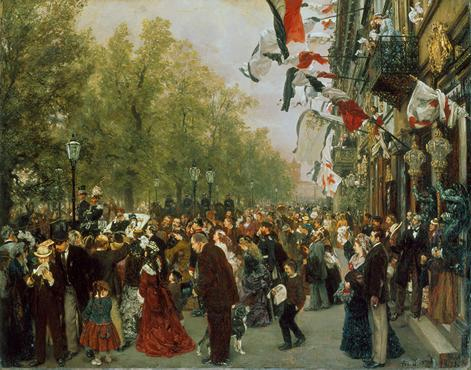 Adolph Menzel was an artist of colossal energy and encyclopedic accomplishments, the tireless chronicler of contemporary Berlin during a career that spanned seven decades. He first found fame as a book illustrator and printmaker, only taking up painting in the 1840s. Details of city life that he recorded in countless pencil sketches, made as he roamed the city, frequently found their way into his complex and crowded oil paintings. Some of Menzel's acquaintances are depicted in The Departure of King William I for the Front (top right), an event the artist witnessed from a restaurant on Unter den Linden. With the king's carriage all but lost in the throng, the painting is less a historical record than a portrait of Berlin's fashionable bourgeoisie. 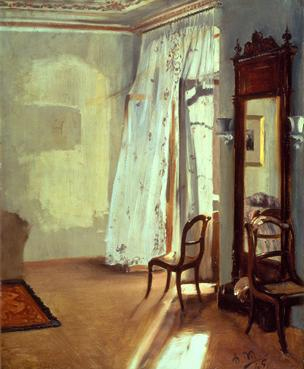 Menzel's limitless curiosity embraced opposite poles of Berlin society, leading him to depict the upper classes at court as well as industrial workers in factories. Even his landscapes range in subject from princely gardens to the backyards of tenements. Though Menzel never married, the intimate rituals of the domestic realm were important to him. In a series of oil sketches of the mid-1840s he explored his family's apartment and the views from its windows. Unknown until the time of his death in 1901, these sketches were immediately recognized as important precursors of impressionism. 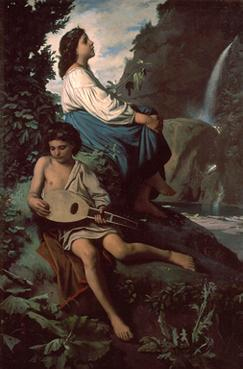 Like the Nazarenes before them, German artists in the later nineteenth century continued to make their way to Italy. The presence there of these Deutschrömer, or German-Romans, attested to a German belief in a spiritual affinity between the two lands. The Italy these painters depicted could be seen as a kind of idealized Germany, where pure feeling and ideal beauty still predominated. Their paintings served as a foil to the naturalism that held sway at home and influenced artists working there, such as Moritz von Schwind. They also anticipated the symbolism that would become important at the end of the century. 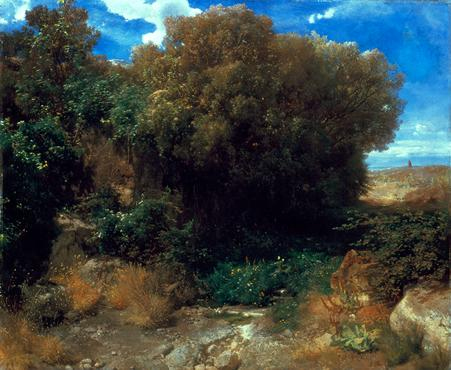 Anselm Feuerbach's most ambitious paintings are high-minded allegories cast in the visual language of the classical tradition. He was not immune to the sensual beauty of Italy, as depictions of his mistress, Nanna Risi, confirm. Arnold Böcklin, the leader of the German-Romans, was famous throughout German-speaking Europe and extravagantly praised for his depictions of sun-drenched land infused with nostalgia for the classical past. By the time of his death, a strong reaction had set in among modernists. One influential critic, Julius Meier-Graefe, argued that the problem with German art was Böcklin: until his influence was overthrown in favor of more purely formal values, German art could not advance. 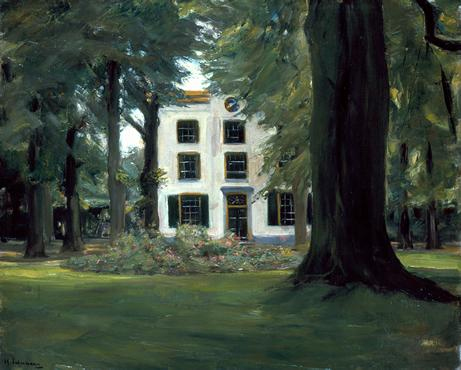 "Pure Painting" and the French Avant-Garde

From the 1860s young German painters were following developments in French art. In 1869 Gustave Courbet and Edouard Manet exhibited in Munich, and Courbet visited the city, attracting the intense admiration of Wilhelm Leibl and his circle of friends. Their realism and interest in pure painterly values were given fresh impetus by this encounter. By the end of 1869, Leibl himself was in Paris where he showed at the Salon. A decade later, Max Liebermann traveled often to the French capital, committed to making modern French art known to German artists and vice versa. The loose brushwork and unpretentious subject matter of his Villa at Hilversum (top left) reveal the profound influence of Manet, whose work Liebermann collected. 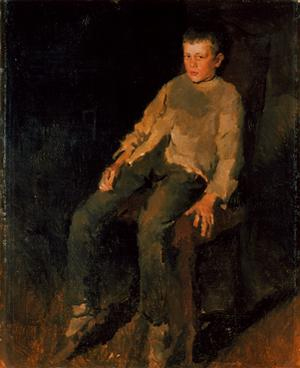 After Hugo von Tschudi became director of the Nationalgalerie in 1896, he acquired modern French paintings by Manet, Claude Monet, and Auguste Renoir, and the first painting by Paul Cézanne to be purchased by a museum anywhere in the world. Conservative artists and academicians objected and Emperor William II saw modern French art as a pernicious influence on German painters. In 1909 he forced Tschudi's resignation. The small, distinguished group of French impressionist paintings that Tschudi brought to Berlin represented the first attempt by any museum to form a significant collection of such works. 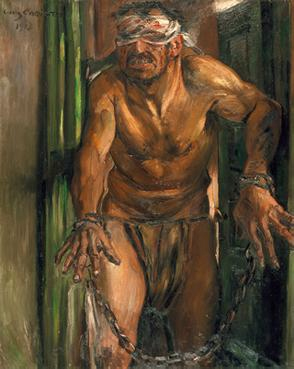 The 1890s saw the formation of secession movements across German-speaking Europe. These were independent exhibiting societies, often run by artists and free from the control of local art academies. Munich's Secession was founded in 1892, Vienna's in 1897, and Berlin's the following year, with Max Liebermann as president. The various Secession exhibitions, usually held annually, became leading venues for the display of progressive art. Impressionists like Liebermann and Max Slevogt and expressionists like Lovis Corinth and the young Max Beckmann all participated.

Secession was anti-academic and international in outlook and pitted itself against the conservative art policy of the emperor. This was especially true in Berlin, where the bombastic painter of imperial grandeur, Anton von Werner, held power. Close to the emperor, he promoted rigid academic training and a nationalistic art at the service of the state. By the turn of the century, the vivid naturalism that was Werner's trademark was deemed obsolete by increasing numbers of artists. The slashing brushwork and raw emotion of paintings such as Corinth's Samson Blinded (top right), in which the ailing artist expressed his own suffering through that of the Old Testament hero, signaled a new direction in German art.