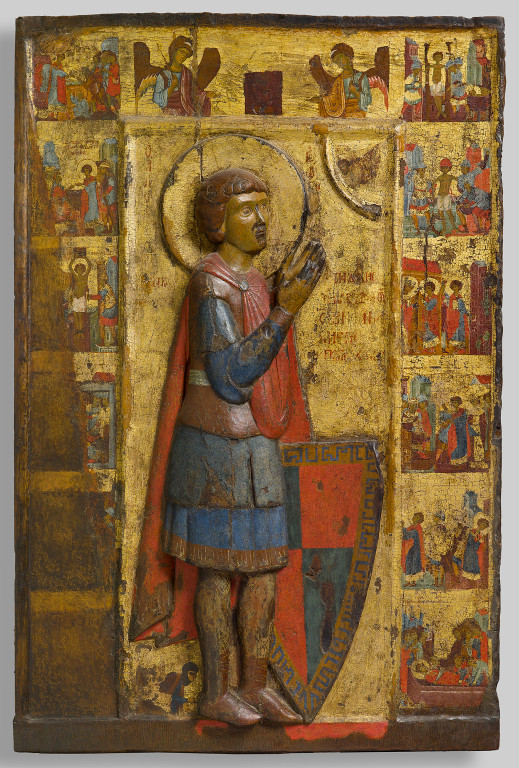 This icon typifies the hybrid style of late Byzantine art in its mixture of Western and Eastern elements. Carved in relief, Saint George is cast as a crusader with his Western armor and triangular shield. In contrast, the surrounding scenes from his life, beginning with the saint’s distribution of his belongings to the poor and ending with his burial, are purely Byzantine in their iconography.

Icon of Saint George and scenes from his life, probably from Arta (northwestern Greece), 13th century, tempera and gold on wood, Athens, Byzantine and Christian Museum 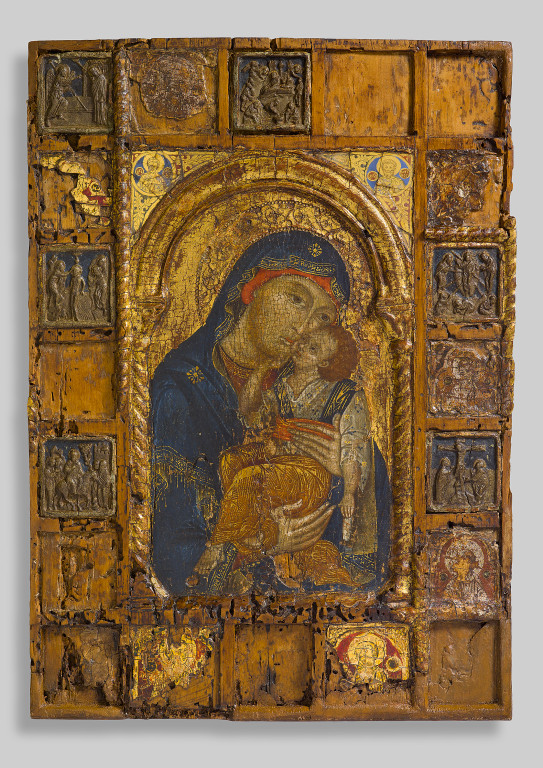 The mingling of Western and Byzantine techniques makes this icon unique. The Virgin and Christ child are rendered in tempera (pigments mixed with egg yolk), the traditional medium of icon painting. The portraits of the evangelists Luke and Matthew in the spandrels above the arch are in a technique known as verre églomisé, in which the back side of glass is covered with gold leaf that is then engraved. The portraits of apostles and scenes from Christ’s life are sculpted in stucco. Both the gold glass and relief stucco techniques were practiced in Italy at the time, especially in Venice. The icon may have been made for either a Byzantine with a taste for Venetian art, or the reverse. 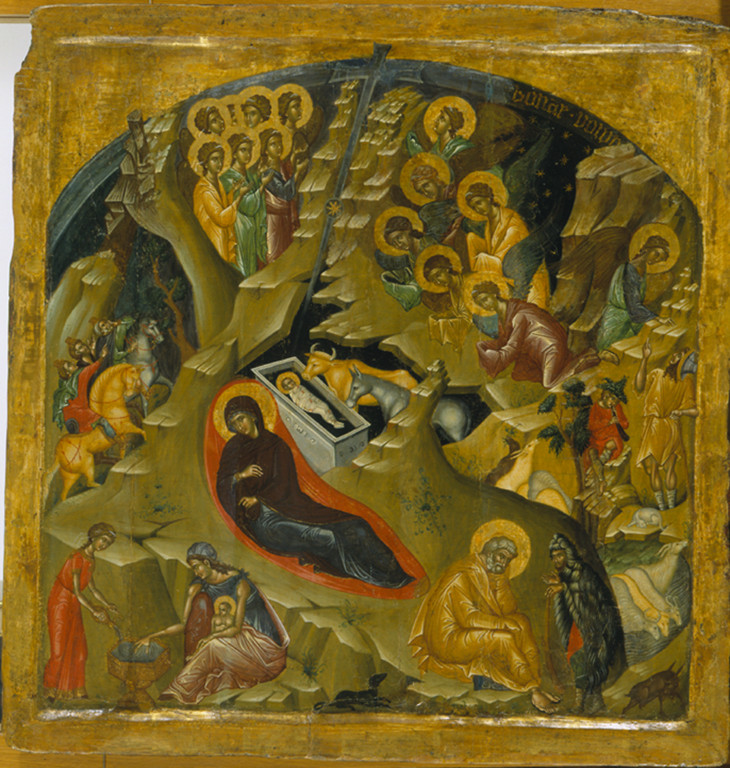 This beautifully preserved icon depicts the birth of Christ in Byzantine fashion, taking place in a cave (rather than in a shed as in Western Europe). The artist used rock formations to create pockets of space for other scenes: from left, the arrival of the Magi, the infant’s first bath, Joseph, and the Annunciation to the shepherds. One vignette has nothing to do with the biblical account of Christ’s birth: the shepherd boy playing his pipe while his flock drinks from a stream, which reflects a new interest in the natural world.

The sky originally bore a Greek inscription referring to the Nativity (Luke 2:14) that was later covered with a Latin inscription, indicating that at some point in its history, this icon ended up in a Latin-speaking, Catholic environment. 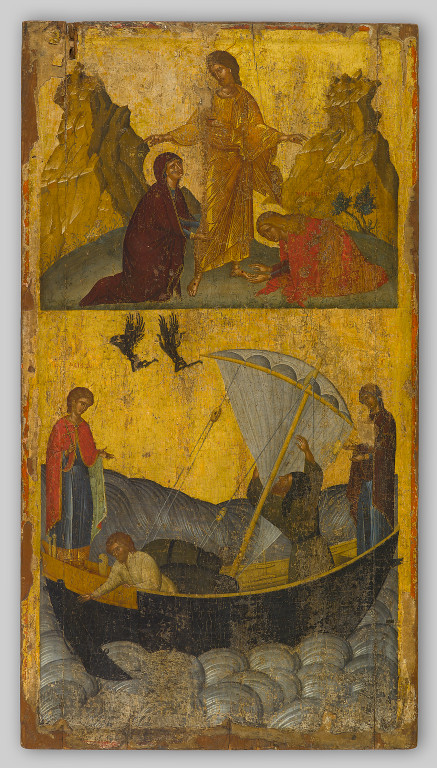 The myrrhophores (myrrh-bearers) are the kneeling figures of the Virgin Mary and Mary Magdalene who visited Christ’s tomb after the Crucifixion. They had brought with them sweet spices, intending to anoint his body, but instead found that he had risen from the dead. The scene below depicts three priests who were returning to Crete when they were caught in a terrible storm and prayed for deliverance. Saint Phanourios and the Virgin Mary miraculously appeared and rescued them, dispatching the two demons that had caused the storm, seen here in retreat above the ship.

Attributed to the painter Angelos, active c. 1425–1450, Icon of Christ with the myrrhophores and a miracle of Saint Phanourios, Crete, Candia (modern Heraklion), tempera and gold on wood, Heraklion, Holy Archdiocese of Crete, Foundation of Communications and Education, Museum of Holy Icons and Relics 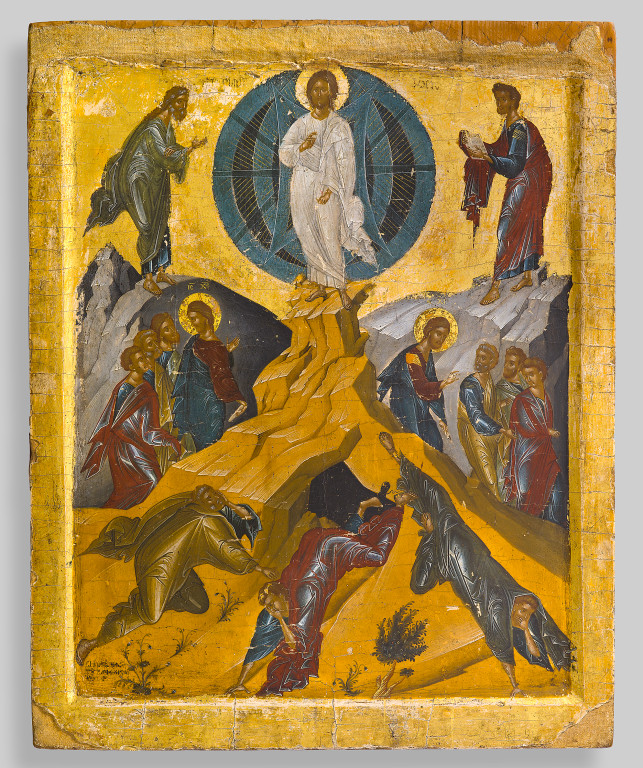 Christ depicted in brilliant white garments represents the revelation of his divine nature, according to the Gospel of Mark (9:2): “He was transfigured before them. And his raiment became shining, extremely white as snow.” His awestruck apostles Peter, James, and John tumble down the side of Mount Taber. Flanking Christ are the prophets Elijah and Moses. Below them, groups of apostles arrive and depart from the mountain. The delicate facial features, ethereal palette, and narrative detail are characteristic of Cretan painting in the 15th century.

Icon of the Transfiguration, Crete, second half of 15th century, tempera and gold on wood, Athens, Benaki Museum, Gift of Helen Stathatos 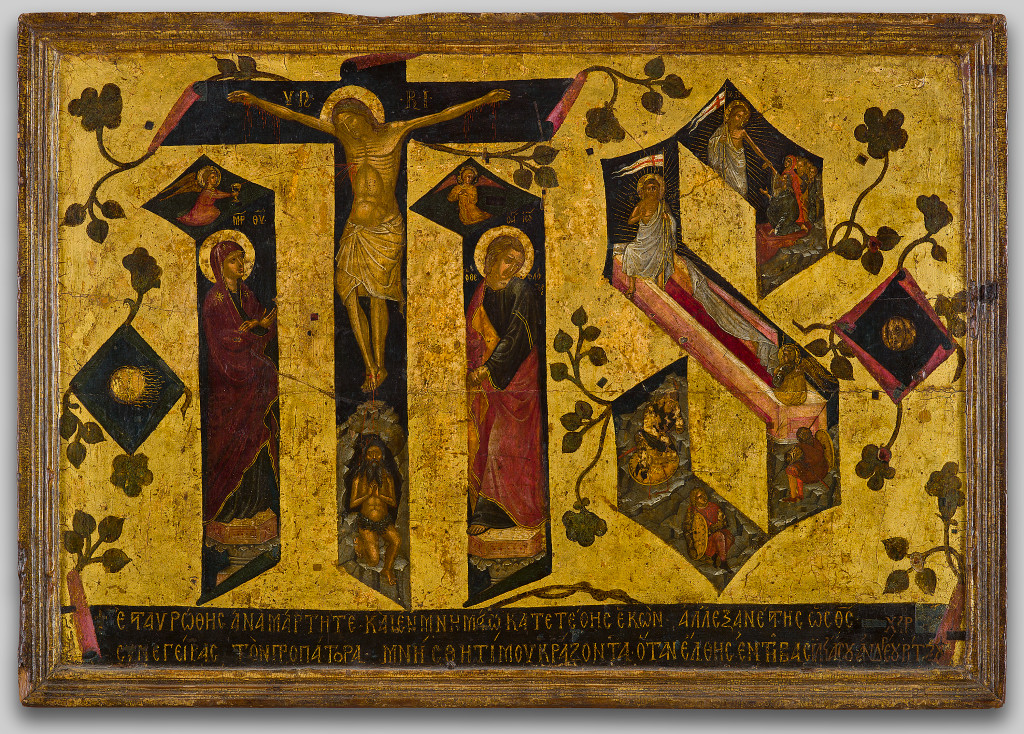 In the mixed Greek and Italian society of Crete, the inscription “I H S” could be understood as both the first three letters of Jesus’ name in Greek and as the Latin emblem I(esus) H(ominum) S(alvator), Jesus the Savior of Men, devised by the Franciscan monk Bernardino of Siena (1380 – 1444).