In 1938 Stuart Davis hatched a plan to revisit earlier compositions as the basis of new ones with several goals in mind: “To extract esthetic essence from earlier works. To save time by using material already on hand. To improve my standing by raising the critical opinion of the value of my past work.” Coming from an impoverished artist pushing fifty with dozens of unsold canvases on his hands, this pragmatic thinking is understandable. But soon the practice took on a life of its own. Like a jazz musician improvising over and over again on standard songs and chords, Davis embraced a mix of recursion and invention, returning to earlier compositions and transforming them. From 1939 until his death in 1964, Davis based some eighty percent of his paintings on earlier models.

Town Square and Report from Rockport 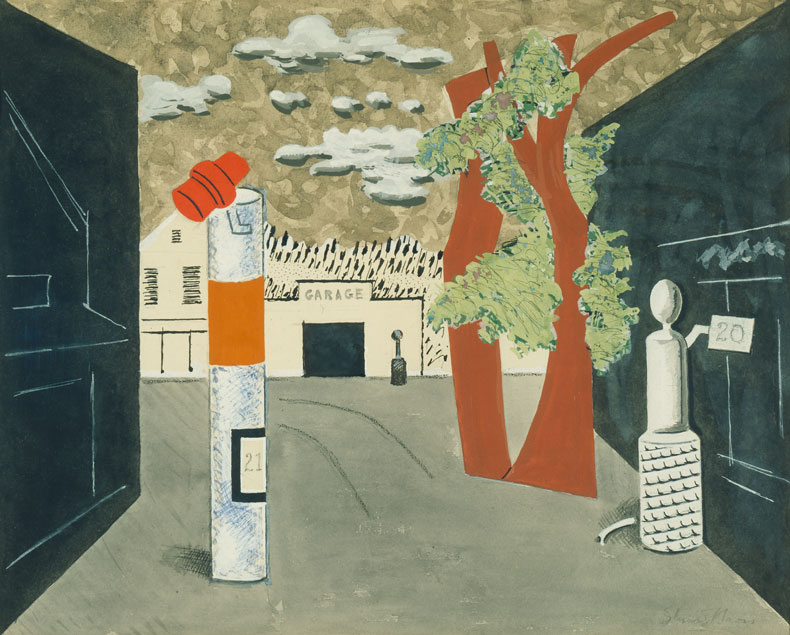 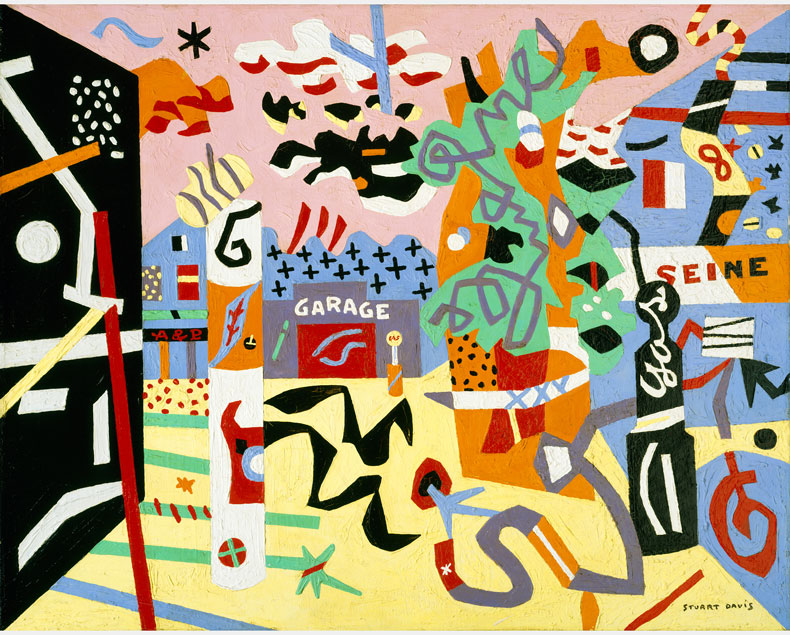 Report from Rockport is one of the first works in which Davis returned to a much earlier painting, a decade-old gouache titled Town Square, as the exact basis for a new one. The main square of a Massachusetts seaside town, clearly visible in the earlier painting, is nearly obscured in the later one, overrun by a jumble of squiggles, dots, dashes, and crosses and eye-popping color.

Landscape with Saw and Rapt at Rappaport's 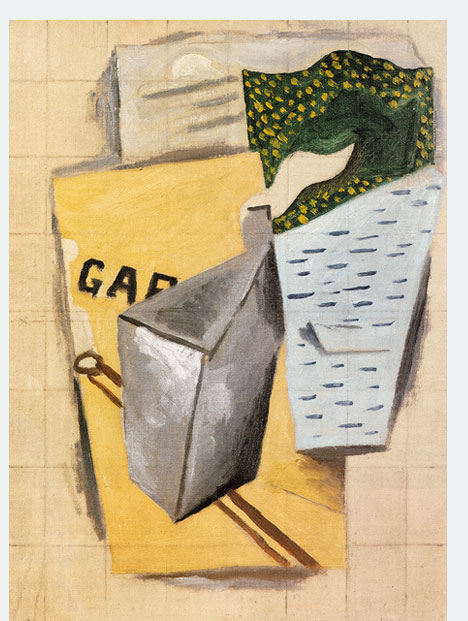 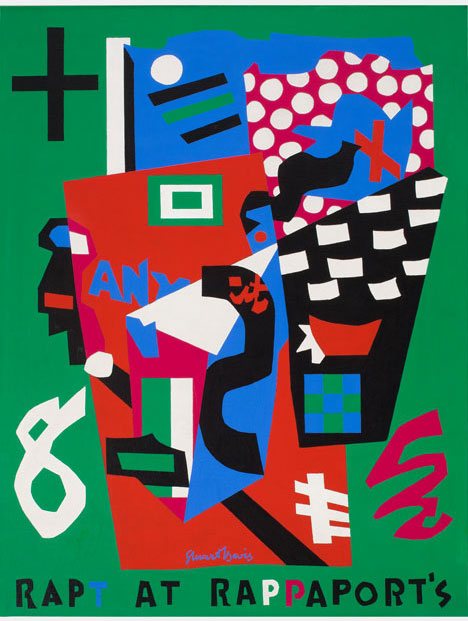 The small cubist canvas from 1922 was the basis for the resounding canvas painted some three decades later. In a visual pun typical of cubism, the downward-pointing saw blade can also be read as a lake with a boat, the green saw handle as a verdant shore. In Rapt at Rappaport’s, Davis preserved all the basic elements of the original but flattened them into abstraction and heightened the color. Now the puns are verbal, not visual. Rappaport’s was a toy store in Manhattan known for its polka-dotted wrapper paper; a jazz percussionist raps on a snare drum; if you are spellbound, you are rapt.

House and Street and The Mellow Pad 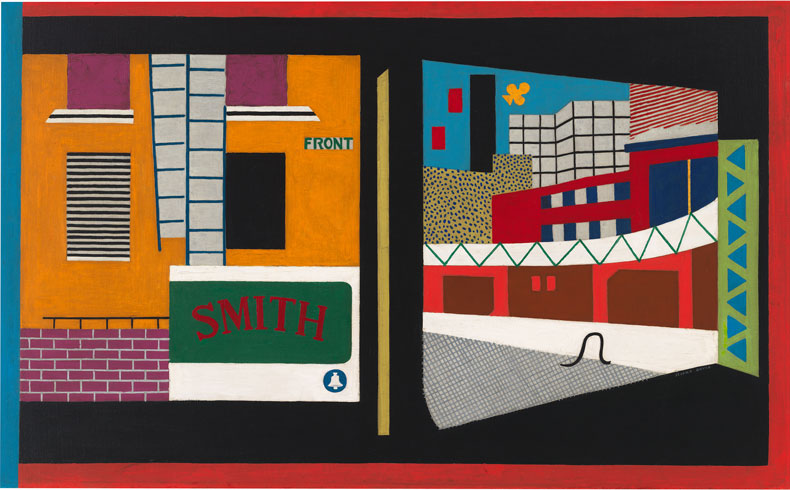 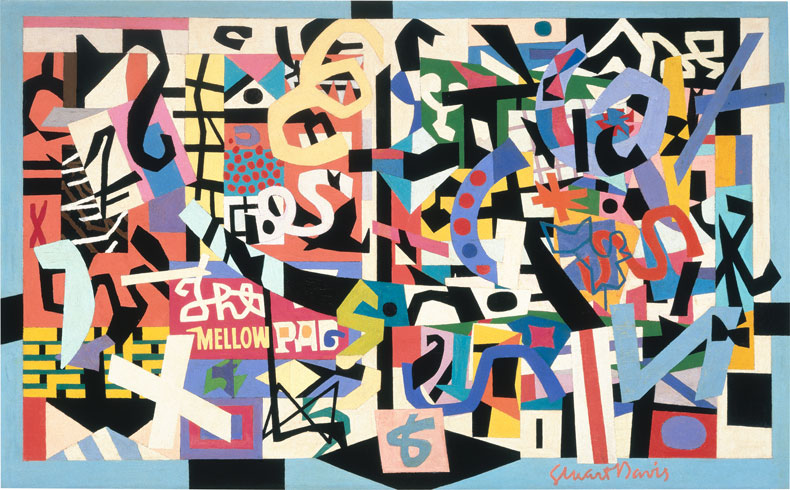 But for their identical size, these two paintings seem to have little to do with one another. A closer look reveals common elements: the bricks at lower left, the central divider with a beveled point, the location of lettering. In fact, Davis used the sober House and Street as the basis for the first stages of the frantic Mellow Pad. The former presents two views from Front Street in Lower Manhattan, keeping them carefully separate; the latter work compresses a riot of information into a single image. Davis work on The Mellow Pad on and off for six years. The result: an impacted, overworked masterpiece that gave him plenty to unpack in the years ahead.

Matches and Something on the 8 Ball 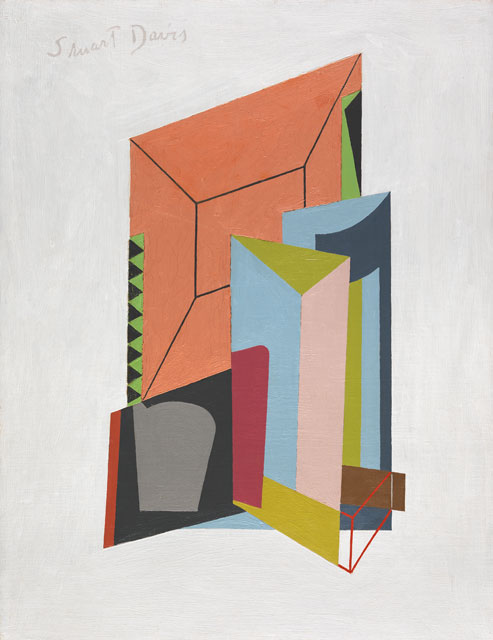 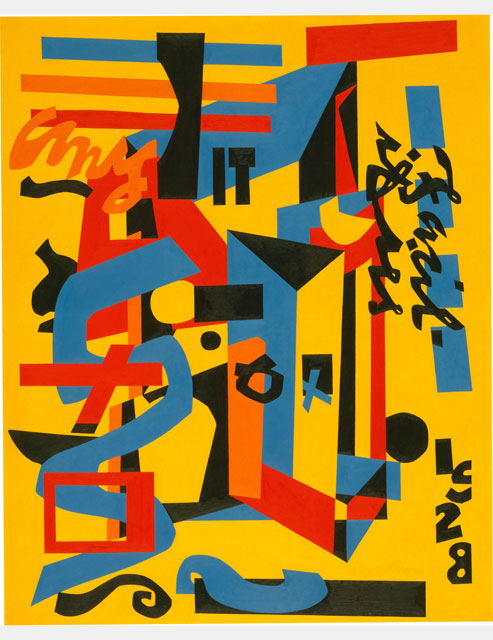 From the beautiful inlays and subtle hues of the 1927 painting Matches, with the mere hint of a matchbox at lower right, Davis created the boisterous Something on the 8 Ball, its core hollowed out by blazing yellow and beset by words: “any,” “it,” “facil-ities.”