As the Edmond J. Safra Visiting Professor, I was expected to fulfill two obligations during my four-month tenure: the first was to give a lecture on my current thinking, and the second was to organize a colloquy. Both programs related to my interest in thinking about museums as spaces of political transformation, and about how one might engage art in ways that are attuned to its capacity to transform us into political subjects and ethical actors. How can art, and museums, make us—both as individuals and as communities—better?

My lecture, “Art Writing and Opacity,” emerged from the writings of the French-Martiniquais poet and philosopher Édouard Glissant. In his book Poetics of Relation, Glissant argues that colonial power was exerted through mechanisms that meant to lay bare the colonized subject: to record them; to study them; to understand their lives, cultures, and art; to translate them; to make them visible to the European gaze. This demand to know—a demand made by the powerful on the powerless—is a form of control, says Glissant, since the powerless have no standing to consent to these forms of knowing. In the face of this, he asserts a right to opacity—a right, that is, to keep parts of the self in reserve, safe from power’s prying eyes. A similar argument is made by the xwélmexw (Stó:lō/Skwah) artist, curator, and writer Dylan Robinson in his book Hungry Listening: Resonant Theory for Indigenous Sound Studies. Among other arguments in his rich study, Robinson points out the essentially extractive modes of knowing encouraged in Western ontologies, challenging the reader to make space for unknowing, especially in relation to institutions within the settler-colonial state.

The question I broached in my talk was how to write about the art of others—of artists who are dealing with histories of and creating work for racialized, minoritized, and colonized communities of which I am not a part—in an ethical way, without taking advantage of my own position or relative power, without resorting to extractive models of writing. In thinking through the problem, I took heed of the lessons of a number of artists and writers who have challenged us to sit with silence, opacity, secrecy, veiling, and invisibility—including the painter Jennifer Packer, the sculptor Simone Leigh, the writer Saidiya Hartman, and the composer Raven Chacon. 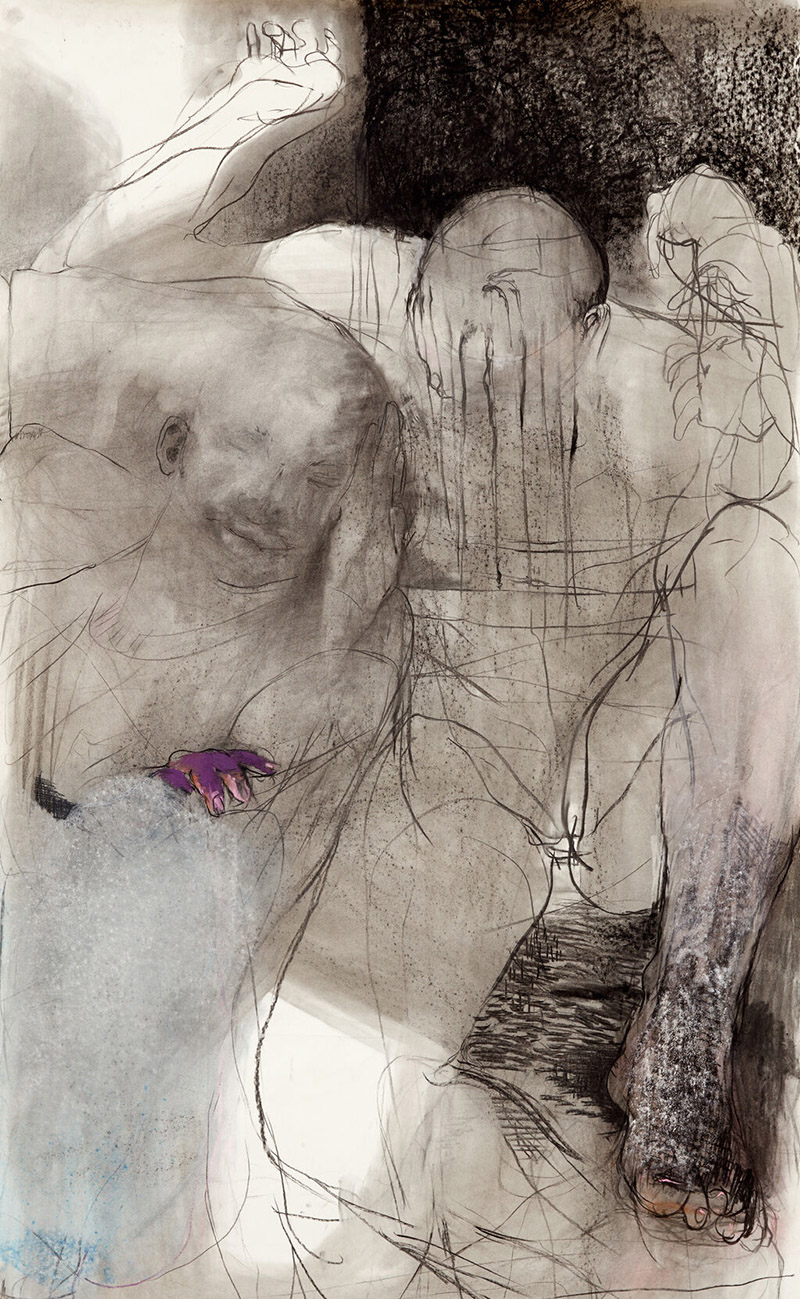 Jennifer Packer, The Mind Is Its Own Place, 2020, charcoal and pastel on paper. Courtesy of the artist and Sikkema Jenkins & Co., New York. Artwork © 2022 Jennifer Packer

The Safra Colloquy, “The Anarchival Impulse,” was a collaboration with curator Anthony Elms, with whom I have been engaged in a sustained conversation about the problem of archives and their counterparts, collections. The event—a conversation with writers, artists, curators, and art historians—started with the premise that archives and collections are shaky foundations on which to build our histories as well as the institutions created to preserve, examine, and expand those histories. Archives and collections are partial, of course, but their silences and occlusions are not only the products of passive or inadvertent omission, but also of active forgetting. To what extent is the archival or museological impetus to care for objects (the Latin root of curate is, after all, curare, “to care”) itself a form of violence toward them, especially in the case of objects that come from cultures in which the life of objects is not merely a metaphor? To what extent is history—a discourse predicated on the authority of the archive, no matter the impossibilities it creates when thinking about the past and future—a straitjacket as often as it might be an avenue out of insupportable ways of thinking about the world?

The title of the colloquy was a nod to the artist Stephanie Syjuco, whose work seeks out the ways that historical archives contain evidence of their own failures and decomposition. Amy Sillman’s Artist’s Choice installation at the Museum of Modern Art in 2019–2020 also guided us in our brainstorming. Titled The Shape of Shape, it was not only a brilliant and cacophonous visual tour through some of the most unexpected corners of the museum’s collection; the installation was blissfully free of the deep anxiety over history that overshadowed the museum in the wake of its most recent collection rehang, an attempt to make the galleries more “diverse.” Saidiya Hartman’s embrace of “critical fabulation,” which counters the antiblackness of the archive (as yet another instantiation of the structural antiblackness on which our world is built), with a turn toward what is often considered the antithesis of history—namely, fiction—was another guidepost. We also looked to the work of Indigenous curators, scholars, and artists who are forcing museums to recognize their collections as a form of violence in relation to what are, in fact, considered living entities and not corpses.

Aruna D’Souza will continue to write for the New York Times, 4Columns, Frieze, and other publications. She will stay in Washington, DC, after the end of her term at the National Gallery of Art, stepping into the position of 2022–2023 William Wilson Corcoran Visiting Professor of Community Engagement at the Corcoran School of the Arts & Design.