Captured in a portrait by the itinerant photographer George Benjamin Wittick (1845–1903), a glowing concha belt is suspended between the hands of the Diné silversmith Béésh-łigaii il’ini Alt’so’sigi (Slender Maker of Silver, d. 1916). With his tools shown to the right, Béésh-łigaii il’ini Alt’so’sigi cast, annealed, and hammered silver coins into bridles, necklaces, and other forms of adornment in the 1880s, all of which came to signal his community’s independence and sovereignty despite the restrictions of the reservation system. Diné silverwork emerged during the establishment of the US silver mining industry throughout the American West, a central driver of Indigenous dispossession during the second half of the 19th century. Political debates about the economic, social, and financial importance of silver during this period highlighted otherwise obscured production chains, positioning handcrafted silver objects as interfaces between subterranean mines and bourgeois dining rooms. How were silver objects positioned within these political debates? In what ways did silverwork evoke or conceal these central production chains and the politics of sovereignty within this historical moment?

In this context, my dissertation develops the analytic of the silverscape to recognize the shadows of extraction and the broader environmental, social, and political ecologies that persist behind every silver object. This ecology is composed of a web as the material flows from the mine, through the homogenizing process of amalgamation, to the artistic fabrication that often obscures any reference back to the material’s origin. It is through a methodology of re-grounding, or the resituating of silver objects within the storied landscapes of their extraction, that this project reveals how silver objects mediated discourses on natural resources, land use, and diplomacy, including Indigenous ontologies that make space for nonhuman actors.

Over the course of four chapters, my dissertation explores silver objects whose material history, iconography, and function reveal tangible histories of extraction on Indigenous lands within what is now the United States. The first chapter introduces late 19th-century political arguments around silver through the bimetallist debate (or the argument for circulating both gold and silver specie), as seen in the display of two allegorical silver sculptures at the 1893 World’s Columbian Exposition in Chicago. Surrounded by survey photographs, mineral specimens, and maps in the Mines and Mining Building, these sculptures provided a framework to read silver aesthetic objects as entwined with extractive industries.

Against this political background, the following three chapters explore how silver aesthetic objects interfaced with discourses on land use, resource inexhaustibility, and Indigenous sovereignty—particularly vis-à-vis the Mexican Cession, land ceded from Mexico to the United States in 1848. The second chapter analyzes the design of the silver Lincoln peace medal, one of the most iconic symbols of US-Native diplomacy distributed between government negotiators and Indigenous leaders during land treaties. In particular, I read the iconography and materiality of the medal against the government’s negotiation with Confederated Ute leaders in 1863 as part of an expansion of mineral rights within the Colorado Territory. While the design of this medal promotes capitalist forms of land use, enforced at the time with treaties, I argue that the medal’s reflective qualities and its assimilation into Indigenous regimes of adornment signal other human and nonhuman diplomatic relationships that undercut the medal’s overt iconography. 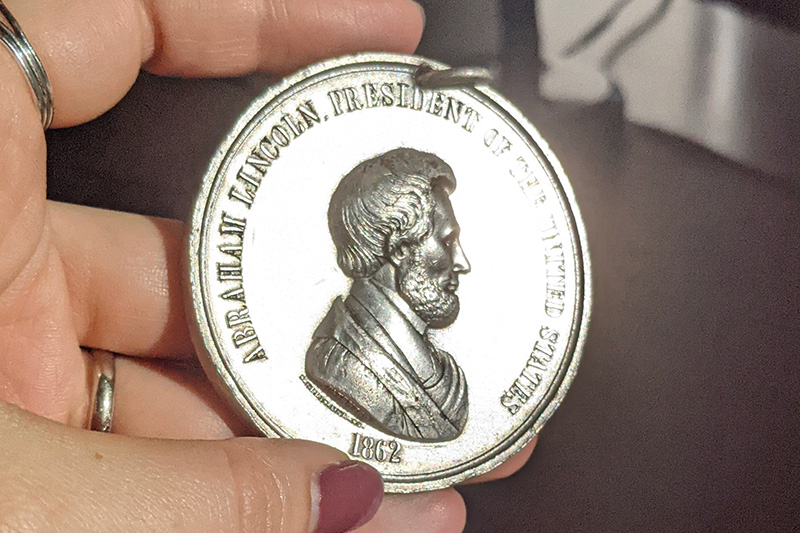 Through the theme of foodways, the third chapter examines Mrs. Marie Louise Mackay’s silver dining service created by Tiffany & Company through its material origins in the mines of Virginia City, Nevada. Pivoting away from Victorian etiquette rules, I explore how the survey photographs of Timothy H. O’Sullivan and Carleton E. Watkins reveal the immense deforestation that resulted from mining silver on the Comstock Lode that disrupted central Washoe and Northern Paiute groves. Positioning the ornate service as the object and survey photographs as the shadow of the silverscape, this chapter reveals a tangible network of nonhuman agents against which to foreground the importance of Indigenous food sovereignty.

The fourth chapter considers the rise of coin-based Diné jewelry through known works by Béésh-łigaii il’ini Alt’so’sigi. I closely examine a squash blossom necklace to reveal the interconnected politics of the global silver trade, the mining industry, and Indigenous sovereignty in the American Southwest in the last two decades of the 19th century. Made of coins from Mexican mines in Zacatecas and US mines in Nevada, jewelry was worn on the body to carry a range of monetary, social, and cultural meanings. Operating as an aesthetic practice and impromptu banking system, the work of Indigenous silversmiths supported mobile lifestyles to reflect Diné worldviews amid the rise of the US reservation system.

These four case studies offer insights on how silver artworks were mobilized to assert, obscure, and resist Euro-American ideas of land use during the expansion of silver mining in the intermountain West. In this way, my dissertation aims to provide a historical and material bridge between established histories of US silver design and emerging discourses on material agency, ecocriticism, and the legacies of settler colonialism and extraction within the United States.

After defending her dissertation in June 2022, Christine Garnier will begin a two-year postdoctoral fellowship at the Society of Fellows in the Humanities at the University of Southern California.