Site-Worlds: An Account of Material Lives from Tello (Ancient Girsu) 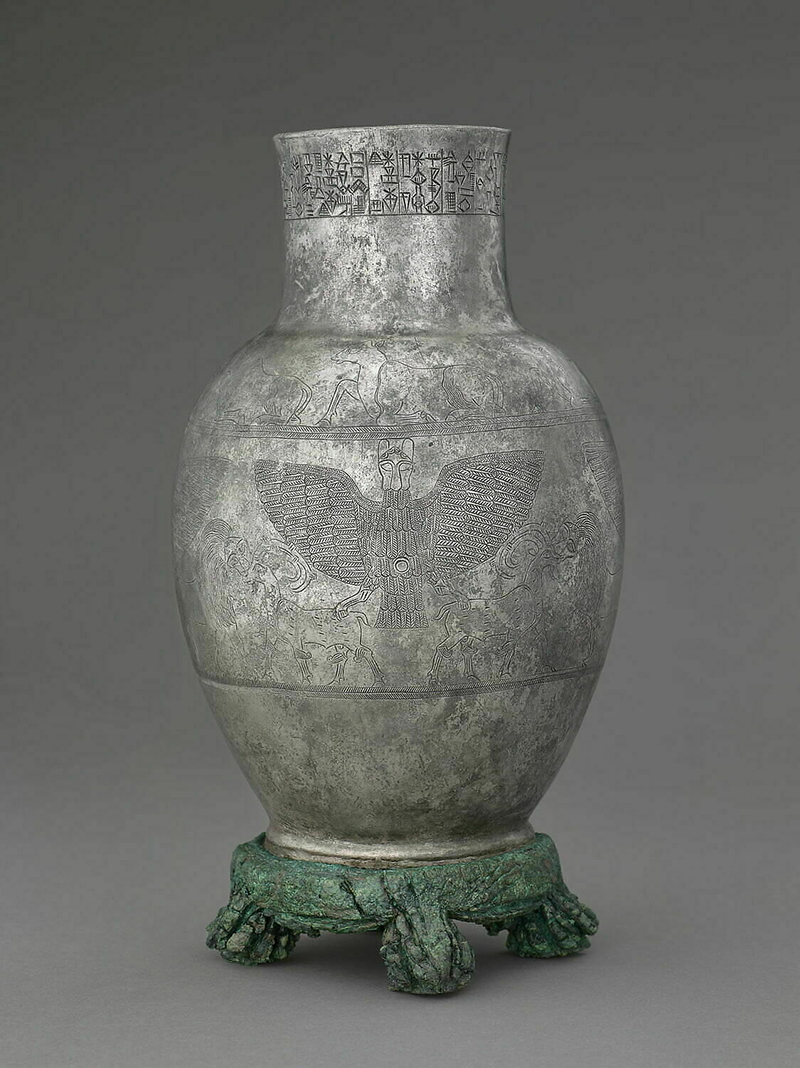 In circa 2400 BCE, Enmetena, the ruler of Lagash in southern Mesopotamia, ordered the fashioning of a vase to be dedicated to his chief god Ningirsu, the god of war and agriculture. Mounted on a copper stand, the gleaming body of the vase was masterfully hammered from a single sheet of silver and engraved in two registers with couchant calves above a series of heraldic compositions featuring the lion-headed Imdugud bird, Ningirsu’s symbol. It was appreciated in its own time as an exquisite work, as evidenced by the ekphrastic inscription wrapped around its mouth, referring to its “refined silver.” Further, the placement of this text mirrored the performative function it had to fulfill: we are told that the god Ningirsu consumed monthly fat offerings, of the kind derived from the depicted calves, through the mouth of this vase. During every performance, text and image worked together for the proper execution of the ritual, upon which the well-being of the ruler Enmetena, and by extension the lands he ruled, depended. The vase was excavated in 1888 by a team led by the French vice-consul in Basra, Ernest de Sarzec, and sent to the Imperial Museum in Istanbul as the 1884 Ottoman Antiquities Law claimed absolute ownership of all excavated material. In clear violation of this regulation, however, Sultan Abdülhamid II presented the vase in 1896 as his personal gift to the Musée du Louvre. Today, it is one of the most celebrated pieces in the Near Eastern collection of the Louvre.

The case of the silver vase of Enmetena nicely encapsulates the main threads that have informed my project, namely an engagement with multiple modes of temporality and materiality. My study material has been the archaeological site where this vase was excavated: modern Tello (ancient Girsu) in southern Iraq. Its excavation marked the “discovery” of the Sumerians and triggered an archaeological sensation in 19th-century Europe. I have brought the art history of this ancient site into the present by constructing what I call a “site-world”: the totality of multi-temporal networks of material encounters, discussed not in isolation but as embedded in an understanding of the mutual constitution of past and present, and of object and subject. This site-world not only encompassed the physical site of Tello and its material remains, but also the variety of discourses that continue to grow out of them. Consequently, my research has bridged traditional disciplinary divides by placing the processes of creating and viewing artworks in the third millennium BCE on equal footing with reception processes across millennia. Similarly, my stylistic and iconographical analysis of artworks has been accompanied by critical readings of both Sumerian texts and late Ottoman documents about their production, excavation, transportation, and exhibition.

This emphasis on inclusivity has necessitated a critical engagement with hitherto untapped local sources in Turkish, Ottoman, and Arabic. The modern history of Mesopotamian archaeology was deeply intertwined with that of 19th-century colonialism, and the existing narratives continue to assign complete authority to individual excavators, namely European (and later, American) diplomats, military officers, engineers, and missionaries. Such accounts are characterized by a rhetoric of “discovery” sustained by the figure of a European/American excavator operating single-handedly in a supposedly uncharted territory. On the other hand, being prominent features in the landscape of Mesopotamia, archaeological mounds have been part of the lives of populations for millennia as documented by ancient Mesopotamian, Hellenistic, and medieval Arabic sources. Moreover, local sources ranging from the Ottoman Imperial Archives to the diaries of the steamship employee Joseph Mathia Svoboda present a far more complicated story on the “discoveries” of the 19th century. By identifying individuals, groups, and structures that have been systematically left out of historical narratives, I demonstrate the existence of an intricate web of local and international relationships that sustained large-scale archaeological campaigns.

Broadening our scope in this manner is not solely a matter of historiographical accuracy. It acts upon both our analyses of ancient contexts and constitutes an ethical position to address the burning issues in art history and archaeology today. For instance, while at the Center, I examined Ottoman and Iraqi accounts on the “discovery” of the statues of Gudea, which shed light on the find contexts of these sculptures and led to a substantial revision of scholarly arguments on ancient iconoclasm. Further, investigating the lootings at Tello revealed a complex system of contracted looters, middlemen, dealers, export mechanisms, and destination markets that is still in use today. I believe that such an emphasis on the entanglement of the past with the present will also be essential in advancing how art history and archaeology as disciplines can ethically engage with its colonial past and chart a more inclusive and more critical path forward.

Erhan Tamur will begin a two-year Andrew W. Mellon Postdoctoral Curatorial Fellowship at the Metropolitan Museum of Art in New York in September 2022.