The Endless Revolution: The Dome, from Vault of Heaven to Hypersphere 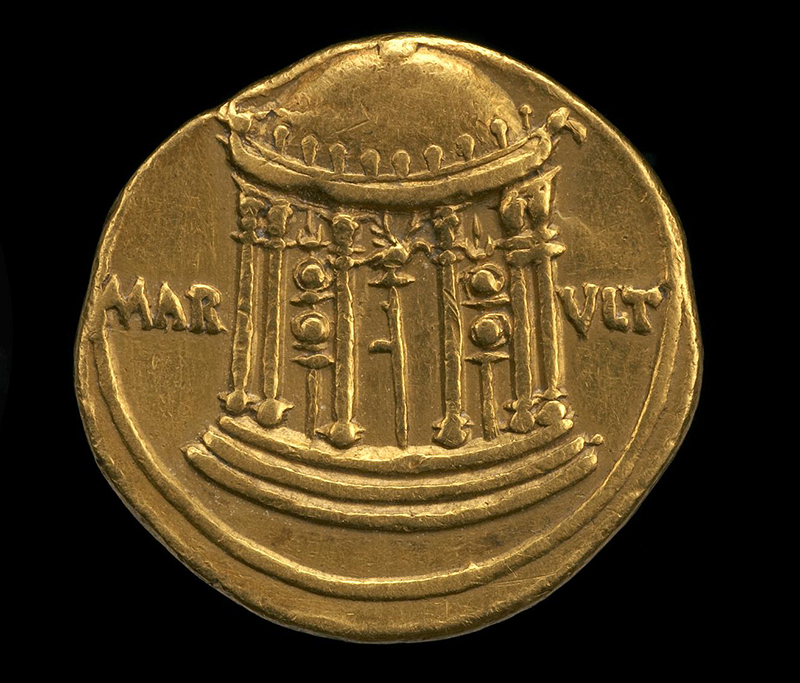 Denarius of Augustus with the monopteros of Mars Ultor on the Capitoline Hill, Spanish mint (Colonia Patricia?), c. 18 BCE, British Museum, London, R.6093. © The Trustees of the British Museum

The dome is a globally shared archetype, as primeval form of self-supporting shelter (from the Inuit igloo to the Puglian trullo) and as place-in-the-world (under the “dome of heaven”). Across continents and over millennia, each begs to rehearse the other. This project therefore traces the history of the dome diachronically, as both concept and construction, from housing for the living to houses for the dead, from sacred microcosms to scientific planetariums, from temples of the gods to temples of the nation-state.

The dome has overshadowed the conflicts and détentes of political and religious history (there is no better example than the Dome of the Rock in Jerusalem, c. 691), while symbols and technologies have migrated back and forth across cultural borders, ranging from the intersection between the Hellenistic tholos and the Buddhist stūpa, to the reciprocal influence of Byzantine and Islamic architecture, to the “anxiety of absence” in those Gothic chapter houses or crossings (for example, Ely Cathedral, 1322–1340) that compensate for the impossibility of building a Roman dome, and so on. These transmissions do not halt at the dome’s hard surface but also include the transcendent illusionism of its decoration, from the descriptive cartography of the zodiac in the royal baths at Quṣayr ‘Amra, Jordan (723/743), to the aniconic and calligraphic paradises of Islamic cupolas, through the panoptic Pantokrators of Byzantine vaults, the massed saints and cloud banks of baroque ones, and finally the Apotheosis of Washington (1865) in the US Capitol and James Turrell’s Aten Reign (2013) at the Guggenheim.

During the course of drafting this book, two of its chapters have ballooned into monographs in their own right. The first (“Why Round Temples?”) began merely as an attempt to prove the very existence of domes in circular temples (tholoi) before the acme of the famous Pantheon (designed 110/114 CE). This in turn led to the question: Why build round temples at all? The near-completed book now broadly investigates the semantics of the ancient tholos from Rome to Rajasthan (Bairat), as well as its perduring afterlife through the Middle Ages until modernity, from Ethiopian gospel books to tholoi as follies. Although trying to attach an exclusive identity to the ancient tholos will only lead us in circles, its signifying form did subsume the overlapping connotations of the heroön (hero shrine), tropaeum (trophy), celestial orb, and chthonic earth. Indeed, the capacity of the tholos to communicate between the globe of the earth and the sphere of the heavens made it an ideal vehicle for the apotheosis of the hero—a man elevated almost to a god—by combining tumulus (mound tomb) and temple. A small portion of this research, on a long-lost temple in Rome and Greco-Roman domes, has recently been published in volume 66 of Memoirs of the American Academy in Rome.

The second tranche of research (“Why Oval Churches?”) investigates the significance of oval spaces in the early modern period across Europe. In the past, the emergence of oval churches, putatively in the 17th century, has been explained as conforming to liturgical needs, as an aberration of “Baroque dynamism,” or as embodying Johannes Kepler’s discovery of elliptical orbits. I instead argue that oval churches acknowledged the difference and continuity between earthly conditions (ovals) and heavenly perfection (circles). Any architect knew that a circle and an ellipse (which an oval approximates) are conic sections, and therefore belong to a projective continuum. Analogously, medieval theories of creation conceived God as the apex from whom all created things descended, radiations of divine spirit in various degrees of materialization. Consequently, this ontological principle could be demonstrated geometrically, whether modeling optics (perception), the radiation of light from a point (emanation), or the metaphysical blending of temporal matter into perpetual spirit. The implications are highly significant for understanding how architectural order communicated with a larger culture, including theology, metaphysics, and natural philosophy. This “lensing” of the heavens was also the subject of dome paintings themselves, which were designed for progressive understanding, from the glimpse of heaven at the church door to the full revelation under the dome.

My overall project examines not only what domes meant in the past, but what they represent for us today, and whether they still have a future. The final examples are therefore the geodesic domes that cluster in biospheres from Arizona to Cornwall, and which populate artists’ impressions of lunar bases, Mars colonies, and faraway space stations. In our post-Einsteinian cosmos, a sphere remains a sphere even when curved in on itself (a hypersphere) thanks to the multiple dimensions of the space-time continuum; but the same idea had already existed as a paradox in the medieval mind to express the incommensurable architecture of the heavens.

From summer 2022, Fabio Barry will be associate fellow of the Warburg Institute, London.