In the late 1650s, when he was only in his early teens, Moses ter Borch (c. 1645–1667) captured in black chalk a plaster cast after the Rebellious Slave by Michelangelo (1475–1564). The drawing chronicles Moses’s deliberations as he interacted with a small plaster copy of a massive sculpture made over a century earlier. The inscription at the top of the drawing records the boy’s working conditions: “On 8 September Moses ter Borch drew this from plaster” (nae Pleijster geteijkent). These words reflect the significance given in the 17th-century Netherlands to remaking the visible world in two dimensions from direct observation, a mode of image production encapsulated in period sources by the words naer het leven. To work “from life” included not only drawing from a live model, but also from inanimate objects, such as plaster casts, which could stand in for the living body as artists honed their abilities and learned how to generate fictive spaces. Moses’s drawing bears traces of the challenges the plaster cast posed during this session. With slightly awkward shading, he positions the figure’s neck further back in space than the foreshortened shoulder, which also casts an emphatic shadow on the abdomen. Meanwhile, Moses enlists the nondescript block that supports the figure’s right foot into the fiction of the picture by extending it to the edge of the sheet, claiming a perspectival setting for the twisting body. These marks, made by a draftsman still developing his skills, recall the affective potential that plaster casts held for both painters and amateurs in the early modern Dutch Republic. 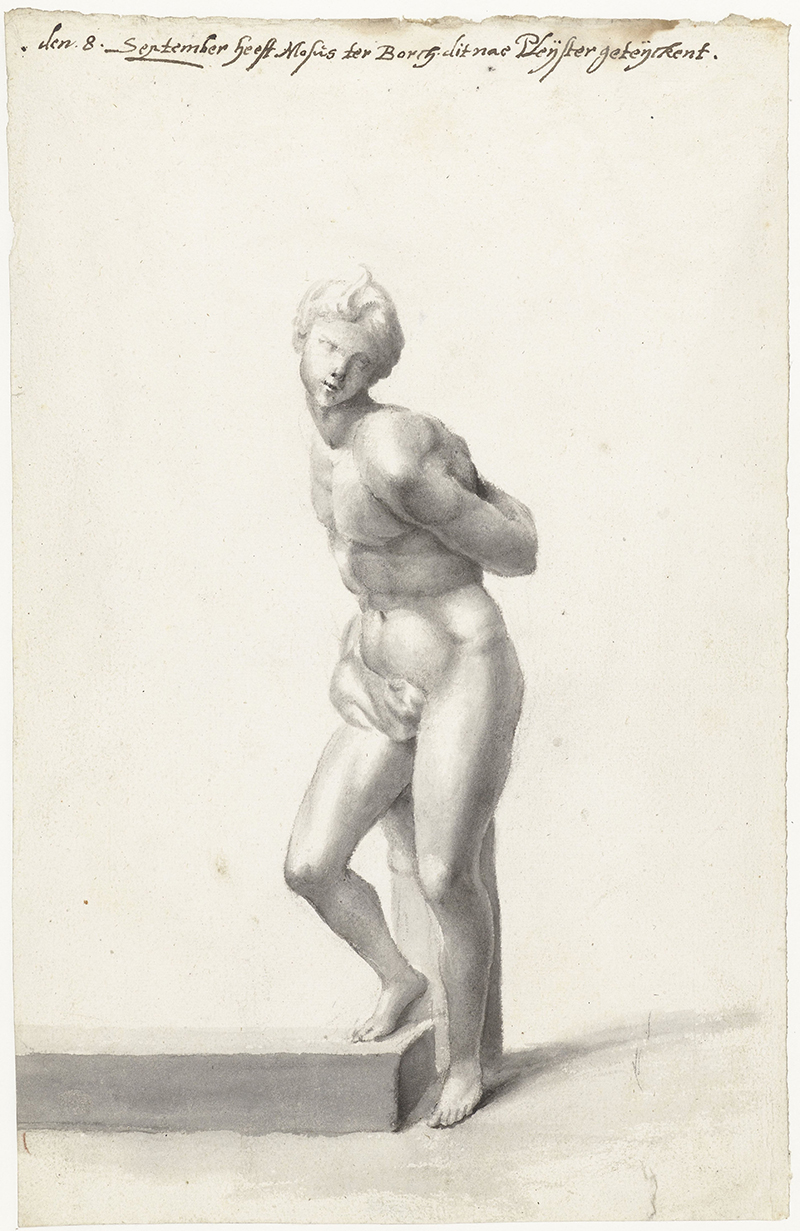 My dissertation constitutes the first comprehensive account of the impact that plaster casts had on the artistic practices, intellectual endeavors, and social statuses of 17th-century Dutch painters, from Cornelis Cornelisz van Haarlem (1562–1638) to Rembrandt van Rijn (1606–1669), to Frans van Mieris II (1689–1763). Though plaster casts appear in period documents, literature, and paintings across genres, they have been marginalized in the history of Dutch art, explained away as mere studio props or didactic tools. I inquire, instead, into the consequences of Dutch painters’ conscious choices to depict plaster casts after ancient and modern sculpture at the same time as they staked their claims as practitioners of a noble art. Plaster casts linked Dutch painters to antiquity, to the Renaissance, to discerning contemporary collectors, and to one another. These modest objects, full of semantic potential, were incorporated into myriad compositions in which they became signifiers of an artist’s ambitions, humanistic aspirations, and technical virtuosity. Through novel interpretations of paintings in which plaster casts have been taken for granted, I argue that these casts lie at the heart of a self-awareness and artistic self-promotion manifested in seemingly quotidian paintings. In light of the scarcity of extant 17th-century casts, I bring together foundational treatises by Samuel van Hoogstraten (1627–1678) and Willem Goeree (1635–1711), probate inventories, newspaper advertisements, paintings, and drawings to demonstrate the appeal of plaster casts in the early modern Dutch Republic.

During the first year of my fellowship, my research focused on the production and circulation of plaster casts. I set out to recognize the variety of laborers that made the existence of plaster casts possible, though their specific names remain largely obscured or lost in the historical record. Their absence from the corpus of images of trades and professions emerged in stark contrast to the privileged self-fashioning of Dutch painters, for whom plaster casts functioned as a means to distinguish themselves from other artisans. My interest in the relationship that abided between a plaster cast and the person who handled it prompted me to explore the act of drawing as a critical moment of multisensory engagement with casts. During my year in residence at the Center, I took a cue from Dutch painters’ depictions of solitary students learning to draw from plaster sculpture as I wrote the final chapter of my dissertation, in which I aim to recapture in part the experience of the amateur draftsman.

My project takes the pictorialized encounters between plaster casts and artists as an opportunity to discern the liveliness that plaster casts introduced into the compositions they populate. With an invigorated focus on plaster itself as a material with a protean character and multipurpose applications, my dissertation contributes to the discourse on Dutch painters’ naer het leven practice through an overdue analysis of the sculptural copies and other bodies in plaster that kept them company. Over the course of four chapters, I describe how plaster casts allowed early modern Dutch artists to overcome limitations of space and time, reach places distant and ancient, and present themselves anew.

Beginning in August 2022, Isabella Lores-Chavez will be associate curator of European paintings at the Fine Arts Museums of San Francisco, where she will continue her research on 17th-century Netherlandish art and devote herself to public-facing museum work, which first compelled her to pursue a PhD in art history.