The signature style of color field painter Kenneth Young (1933–2017)—floating orbs of color—has to date only been examined through the lens of the Washington Color School, the DC art movement of the 1950s–1970s. Young’s childhood in Louisville, Kentucky; his formative years as a painter; and his lifelong relationship with the Black art scene in Louisville have not been formally acknowledged in scholarship. This omission of significant experiences and artists from Young’s narrative has consequently yielded an incomplete picture of his legacy in American art.

This spring, I initiated an oral history project, creating space for artists, poets, musicians, family members, community leaders, and scholars to share their perspective on the Black art scene in Louisville from the 1950s to 1970s. While my research is a work in progress, these interviews have already centered mentors to Young and other African American artists: beat poet Ted Joans (1928–2003) and artist G. Caliman Coxe (1907–1999), as well as contemporaries Fred Bond (1931–1986), Robert Carter (b. 1938), Houston Conwill (1947–2016), Robert Douglas (b. 1933), Eugenia Dunn (1918–1971), Sam Gilliam (1933–2022), Ed Hamilton (b. 1947), Earl J. Hooks (1927–2005), and Bob Thompson (1937–1966). At the time of writing, I am halfway through my sabbatical. While my understanding of Young’s formative years continues to be reframed in real time, the research I performed this year and the importance of this oral history project in understanding Young’s canvases can be illustrated through one example: Spring Joy.

One might recognize in the painting’s title a nod to bebop, with its reference to a 1954 song by influential jazz musicians Clifford Brown and Max Roach. Jazz has been a known influence on Young’s approach to abstraction. Scholarship credits his love for jazz as a personal but general interest, typically describing his commitment to spontaneity and experimentation in relation to experiences in his Washington, DC, studio. Enjoying the jazz scene supported by joints along Walnut Street and in the West End of Louisville—specifically in spaces like the Top Hat, Joe’s Palm Room, or Brown Derby—has not been mentioned within his story. Interviews from the oral history project have begun to tease out these memories, and even to discern when Young began listening to records at the YMCA on Chestnut Street. Many of Young’s contemporaries cite mentor and artist Ted Joans as someone who educated and encouraged young men, like Young and Gilliam, at said YMCA, to experiment with creative expression in all art forms.

Spring Joy is a strong example of Young’s iconic motif: floating orbs of color. Scholarship has stressed its relevancy to the Washington Color School movement without understanding who may have encouraged this newfound aesthetic. Without contextualizing Young’s canvases within the Black art scene in Louisville, it is easy to dwell on the formal properties affiliated with the Washington Color School’s staining process. Like Gilliam, Young returned to Louisville throughout his formative years in Washington to see family and friends. Their art was frequently exhibited too. Young’s shift from figurative to abstract paintings over the course of the 1960s was documented through group and solo shows in his hometown. These exhibits were primarily supported by the Louisville Art Workshop (1967–1978), a Black art collective. During my sabbatical, I have worked with some of the founding members of the Louisville Art Workshop to piece together the exhibition history, meeting agendas, and extant archival material of this Kentucky collective; by working with the artists, it is evident that its cofounder, G. Caliman Coxe, left an immeasurable impression on Kenneth Young’s canvases. 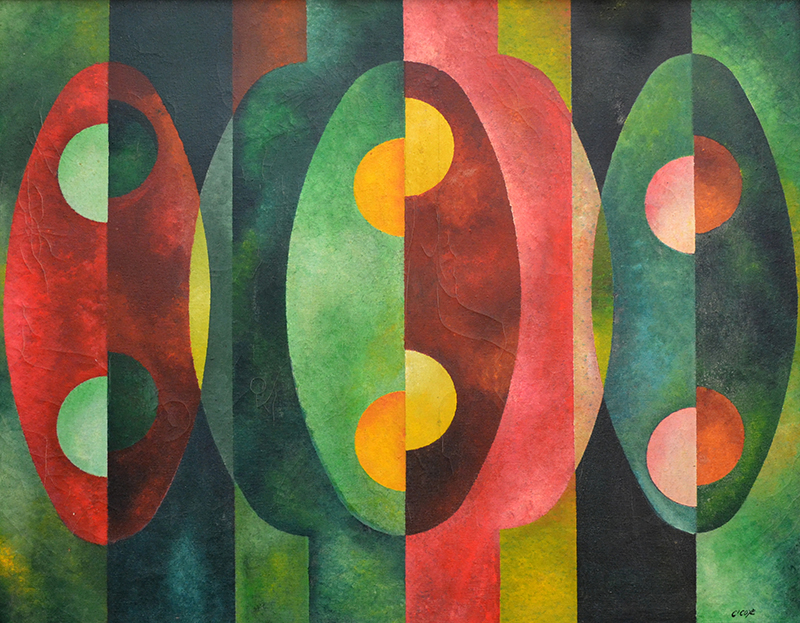 Coxe is considered by many the “dean of African American art in Louisville.” As I studied more work by Coxe from the 1960s—the decade Young’s signature motif matured—I began to reframe my understanding of Young’s approach to abstraction. Scholarship currently credits the DC art landscape of the 1960s for encouraging Young’s bright, nonrepresentational compositions, but my oral history project complicates that notion by elevating relatively unknown artists such as Coxe. As I examine Coxe’s painting Signals, for example, with its yellow, green, and red forms misaligning in a gravity-defying way, I see Young’s canvases anew. Exhibited at the same time in Louisville, Young’s abstract forms and Coxe’s shapes share a strong connection: their paintings hold the same respect for color and form. As I continue to learn more about Coxe and the Louisville Art Workshop through this oral history project, I question how many other celebrated African American artists’ legacies are incomplete without proper acknowledgment of the Black art scene in Louisville, Kentucky, from the 1950s to the 1970s.