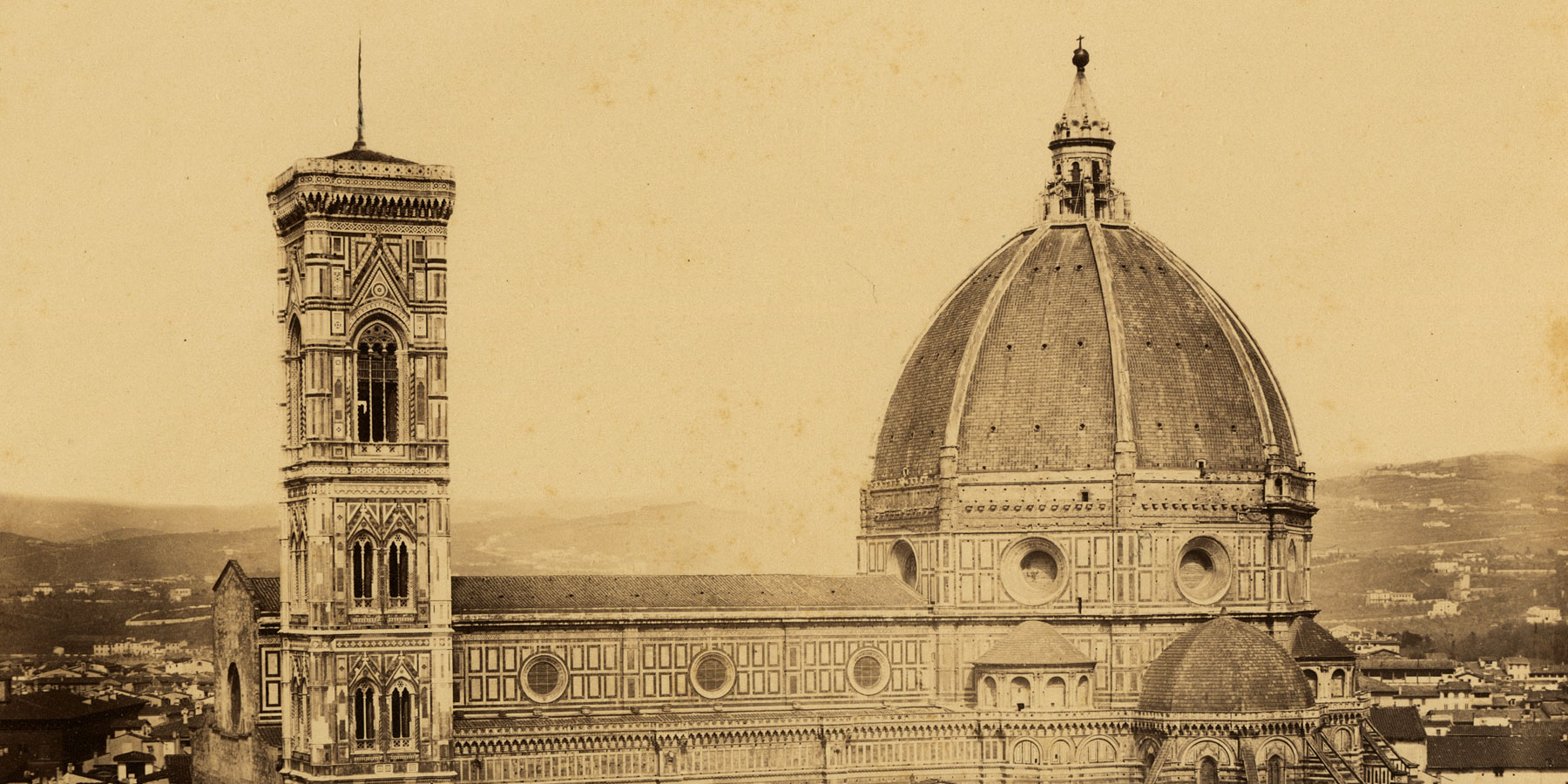 The photographer John Brampton Philpot was born in 1812 in Maidstone, England. As an adult he became a copperplate printer, but in 1850 he moved to Florence, Italy, and undertook professional studio photography. He remained there until his death in 1878. Often referred to by his Italianized name, Giovanni Brampton Philpot, he marked his work with an assortment of dry seals to indicate the locations of his studio. The majority of Philpot photographs in the department of image collections are marked with his seal, J. B. Philpot. Firenze. Borgo Ognissanti No. 17. Two albums in the collection, however, are attributed to the studio of Philpot & Jackson No. 17 Borgo Ognissanti, referring to an unknown associate. Philpot’s turn to photography was certainly influenced by the swift development of photography in the middle of the 19th century and the ample opportunities this presented to an eager market. Italian cities saw a frenzied competition to establish themselves as centers of photography. Florence was home to a host of studios and independent photographers of local and international origins, leading to a diversity of perspectives and subjects.

Photograph: J. B. Philpot, c. 1865–1873. Michelangelo, David, marble sculpture, 1504, Galleria dell’Accademia, Florence. Featuring the David still clothed with the loin covering added by 16th-century city officials, this photograph was taken before the sculpture was moved from its location outside the Palazzo Vecchio to the Galleria dell’Accademia for protection in 1873.

J. B. Philpot, View through Piazzale Uffizi, Florence, Facing North, 1855–1860. Michelangelo’s David can be seen in the Piazza della Signora under an awning, a protective measure undertaken before the sculpture was ultimately moved to its current location inside Galleria dell’Accademia.

Alphonse Bernoud, Palazzo Vecchio, Florence, c. 1850–1872. In this bird’s-eye view of the Piazza Signora, Alphonse Bernoud (1820–1875), a contemporary of Philpot, showcases the grandeur of the Palazzo Vecchio and frames the figure of Michelangelo’s David in the main entrance to the building.

Giacomo Brogi, Piazza della Signora, Florence, c. 1873–1881. Brogi (1822–1881), who took up a studio in Florence in 1863, also captured the Piazza della Signora; however, David is not visible here, having already been moved from its placementin front of the Palazzo.

Giacomo Brogi, Baptistery of Santa Maria del Fiore, Florence, c. 1866–1867. In this photograph the baptistery of the Florence Cathedral, which sits in the piazza front of the church, Brogi foregrounds the significantly smaller, octagonal structure.

Photograph: J. B. Philpot, c. 1860–1870. Andrea di Cione, The Dormition of the Virgin, marble sculpture relief, 1359, Orsanmichele, Florence. A detail of the sculptural decoration for the tabernacle of the church of Orsanmichele.

Photograph: J. B. Philpot, c. 1860–1870. Michelangelo, Portrait of Andrea Quaratesi, drawing, 1530. Philpot’s photographs of prints and drawings of the Uffizi represent a range of artists and works, demonstrating the breath of the collection as it existed in the 19th century.

Alinari, Uffizi Galleries, c. before 1890. While Philpot was documenting the contents of the Uffizi’s collection of prints and drawings, Fratelli Alinari—a photography firm founded in Florence in 1852—captured the artworks as they were hung in the galleries.

Alinari, Uffizi Galleries, c. before 1890. This photograph depicts a variety of religious paintings as well as portraits installed in the Uffizi galleries, complimented by ornate frames and decorative furniture.

Photograph: J. B. Philpot, c. 1860–1870. Jacopo Pontormo, Study for Visitation, drawing, c. 1528. A preparatory sketch for the artist’s oil painting of Mary’s visit to her cousin, Elizabeth, installed in the Church of San Michele e San Francesco in Carmignano, outside Florence.

Philpot arrived in Florence with a daguerreotype device; soon after his arrival, however, he became one of the first in the city to produce calotypes. He was further distinguished for his stereoscopic images and was able to capitalize on the tourist market in Florence, particularly with English speakers. These photographs captured the city of Florence and aided in preserving a historical image of the urban landscape at a time when the city was undergoing extensive renovations and developments. For example, in a signed photograph looking northward through the Piazzale degli Uffizi onto the Palazzo Vecchio, Michelangelo’s David can be seen in the Piazza della Signora under an awning. The sculpture stood in this location for more than 300 years, until it was moved to the Galleria dell’Accademia for protection in 1873.

Not only did Philpot capture fleeting views of Florence, he also participated in the preservation and dissemination of art collections, at a moment when accessibility of collections through images was just beginning to be explored and valued. Beyond picturesque views of Florence, Philpot utilized his skills to photograph art collections, devoting significant attention to the holdings of the Galleria degli Uffizi, from sculptures to old master drawings and prints—the latter two which were compiled into albums, including Photographs from Original Drawings by the Old Masters, two editions of which are held by the National Gallery of Art department of image collections. These editions focus primarily on Philpot’s photographs of works on paper, both single photographs and those bound in albums; however, there are also some examples of sculpture and architecture, all of which provide a view onto 19th-century Florence—both in the arts and in its urban fabric.