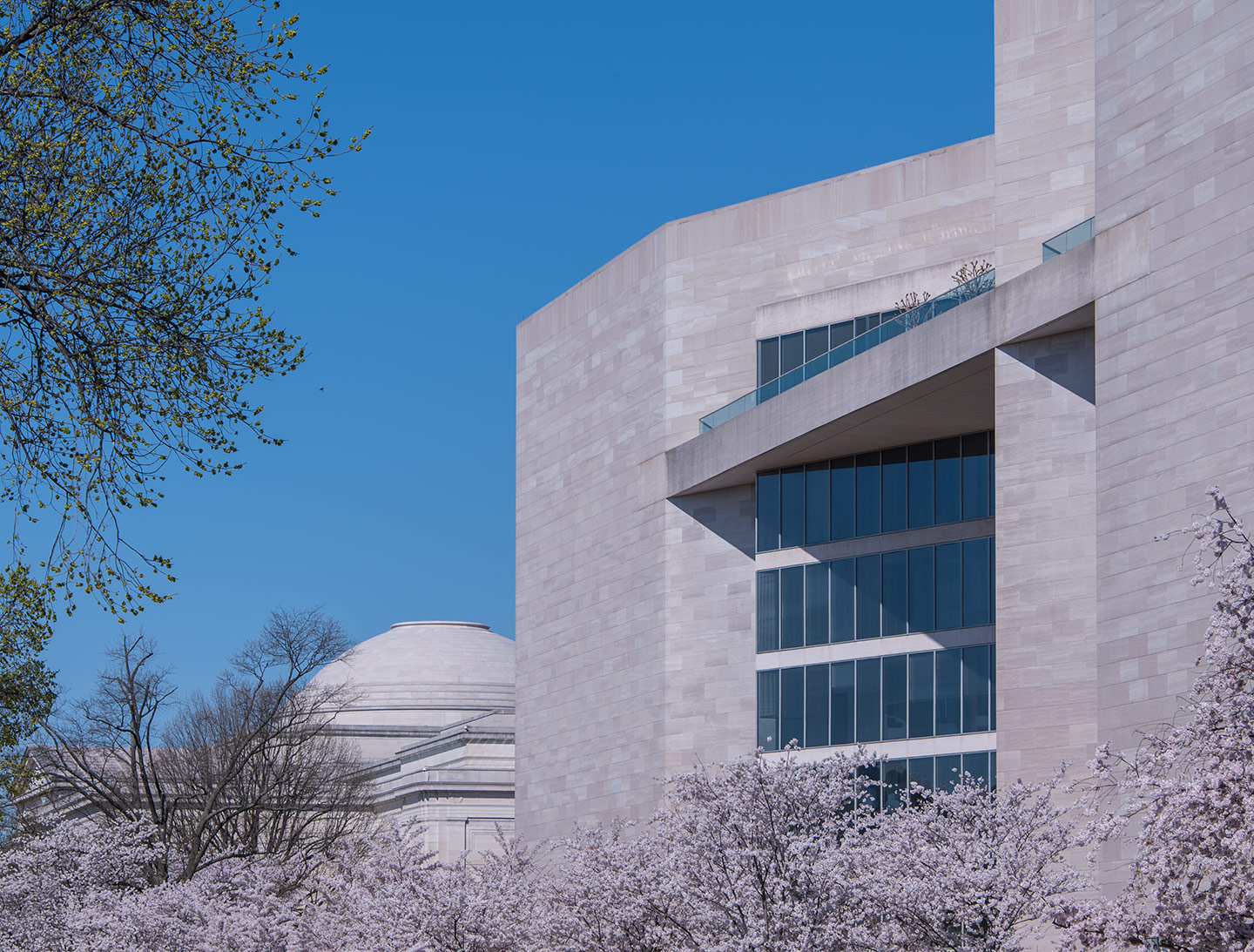 In 2019 the National Gallery of Art undertook its fifth change in leadership in its 78-year history with my appointment as director. Representing the Gallery in this role is an extraordinary honor, and I am grateful for the confidence and trust of the Board of Trustees. I was warmly welcomed to Washington by the Gallery staff and volunteers and by colleagues from both the city and across the world. My own first visits to the Gallery as a junior high school student are still vivid, treasured memories. I marvel daily at the joy and responsibility of leading an institution with such an impact on the cultural life of the nation.

In fiscal year 2019, the Gallery welcomed more than 4 million people (4,070,405) to the Mall campus, and more than 5 million (5,624,290) engaged with the website. Followers and engagements across the Gallery’s social media networks increased to approximately 1.5 million (1,505,045) users on Facebook, Twitter, Instagram, Pinterest, and YouTube. The ways in which audiences connect with the works of art we present continue to expand, but however they access the Gallery, they find a stimulating environment for the enjoyment and appreciation of art.

The Gallery serves the nation by preserving, collecting, and exhibiting works of art and fostering their understanding at the highest professional and scholarly standards. I want to thank all the people who accomplish these activities by caring for and nurturing this institution: those who clean and maintain the building and its systems; those who restore, preserve, program, manage, and research the collection; and those who secure it. I am proud to work alongside these excellent stewards of the Gallery’s resources.

We were delighted to add many new faces to our staff in the past fiscal year; a complete listing of the staff can be found in this report. Our curatorial division welcomed three new scholars: Shelley Langdale joined the Gallery as curator and head of modern prints and drawings, Brooks Rich as associate curator of old master prints, and Aaron Wile as curator of French paintings.

The Gallery’s curators are intimately involved in the tending and growth of the collection, which, thanks to the generosity of private donors, grew in depth and breadth in fiscal year 2019. As Mitch Rales acknowledges in his President’s Foreword, one notable addition was Jan Jansz van de Velde III’s Still Life with Stoneware Jug and Pipe (1650), acquired through The Lee and Juliet Folger Fund. This delicate masterpiece is just the latest example of the impact of Lee and Julie Folger’s passion for Dutch works and generous support of the Gallery’s Northern European paintings collection, which is among the finest in the world.

Our photography department acquired another important and stunning still life with the purchase of Margaret Watkins’s Domestic Symphony (1919) through the Alfred H. Moses and Fern M. Schad Fund. This modern take on the still life is only the second work by Watkins to enter our collection. The artist's work is particularly important to helping us tell the story of how 20th-century photography moved from pictorialism to modernism. We are very proud of the photography collection, which spans the history of the medium with extraordinary depth in the masters of the art form.

The exhibition program focused attention on both familiar and unexplored artists, media, and collections. Two artists, separated by six centuries, received deserved individual attention in the breathtaking exhibitions Oliver Lee Jackson: Recent Paintings and Verrocchio: Sculptor and Painter of Renaissance Florence. Oliver Lee Jackson, who lives and works in Oakland, California, exhibited 18 paintings created over the past 15 years, many of which had never been publicly shown. Renowned in his generation, but never featured in a monographic exhibition in the United States, Andrea del Verrocchio (c. 1435–1488) was the subject of an exhibition that used groundbreaking technical research to explore his materials and techniques, offering revelations about his artistic choices.

Part of the mission of the exhibition program is to organize shows that go beyond our areas of collecting and introduce our audiences to art from other cultures. Taking over the East Building’s Concourse Galleries in summer 2019 was the extraordinary The Life of Animals in Japanese Art. The selection of some 300 works covered 17 centuries (from the fifth century to the present day) and a wide variety of media—sculpture, painting, lacquerwork, ceramics, metalwork, textile, and the woodblock print. A complete listing of the Gallery’s exhibition activity can be found in this report.

Throughout the year, the Gallery’s education and public programs departments offered lectures and gallery talks, tours, films, and events to engage children and adults in active exploration of art. In January 2019, the education department launched a massive open online course, or MOOC, to provide artful thinking strategies to teachers around the globe. As of September 30, 2019, more than 7,000 participants had enrolled in the course from several different countries.

Other new educational offerings included Storytime, the Gallery’s first bilingual children’s program, occurring on the first Friday of each month. Two new programs are rooted in strategies to cultivate empathy and perspective-taking in art: Creating Connections and Art of Looking. NGA Nights, previously known as Evenings at the Edge and designed to attract young professionals, continued to be among the Gallery’s most popular events.

The final phase of public space renovations in the East Building began in 2019. This project includes fire and life safety improvements, building systems renovation, modernization of the atrium skylight, and accessibility improvements. Construction is well underway at minimal impact to visitors to the East Building. Preparations for several complex project elements are scheduled to start in the year ahead including engineering of the replacement glass for the atrium skylight and auditorium lobby and seating improvements. These renovations will preserve and make more accessible the timeless masterpiece that is the East Building of the National Gallery.

The architect of the East Building, I. M. Pei, passed away in May 2019. The engraving of his name on the stone of the East Building, a popular pilgrimage spot for his legion of admirers, became a sort of memorial after news of his death was shared. The East Building itself is his memorial, acknowledged globally as one of Pei’s masterpieces and one of the most important museum buildings in America. It was designed to be timeless and with the understanding that a museum building, like the collections it houses, must always endure.

One of Pei’s important collaborators on the East Building, E. A. Carmean Jr., passed away in October 2019. From 1974 to 1984, E. A. served as the first curator of modern art at the Gallery, working with Paul Mellon, J. Carter Brown, and Pei to realize the East Building. In establishing the Gallery’s 20th-century collection, E. A. added significant acquisitions by Constantin Brancusi, Max Ernst, Arshile Gorky, Juan Gris, Jackson Pollock, Henri Matisse, and David Smith. Following his time at the Gallery, E. A. was the director of the Modern Art Museum of Fort Worth and the Memphis Brooks Museum of Art, where I followed him as director. He retired in 1997 and later became a canon in the Episcopal Church. He authored more than 200 essays, books, and catalogs published in seven languages. He will be missed enormously by everyone who had the pleasure of knowing and working with him.

I am deeply grateful to all of you—the donors, lenders, and volunteers—who support the Gallery. With heartfelt appreciation, I echo the words of the Gallery’s president in acknowledgment of the continuing commitment of the administration and Congress to support the Gallery. The federal commitment to our operation and maintenance confirms our role as a truly national art gallery. In the coming years, I look forward to sharing new developments and enhancements as we undertake a strategic planning process and embrace this living institution that connects people with some of the greatest triumphs of human creativity. I hope to see you in the galleries!

Next Chapter: Board of Trustees and Committees