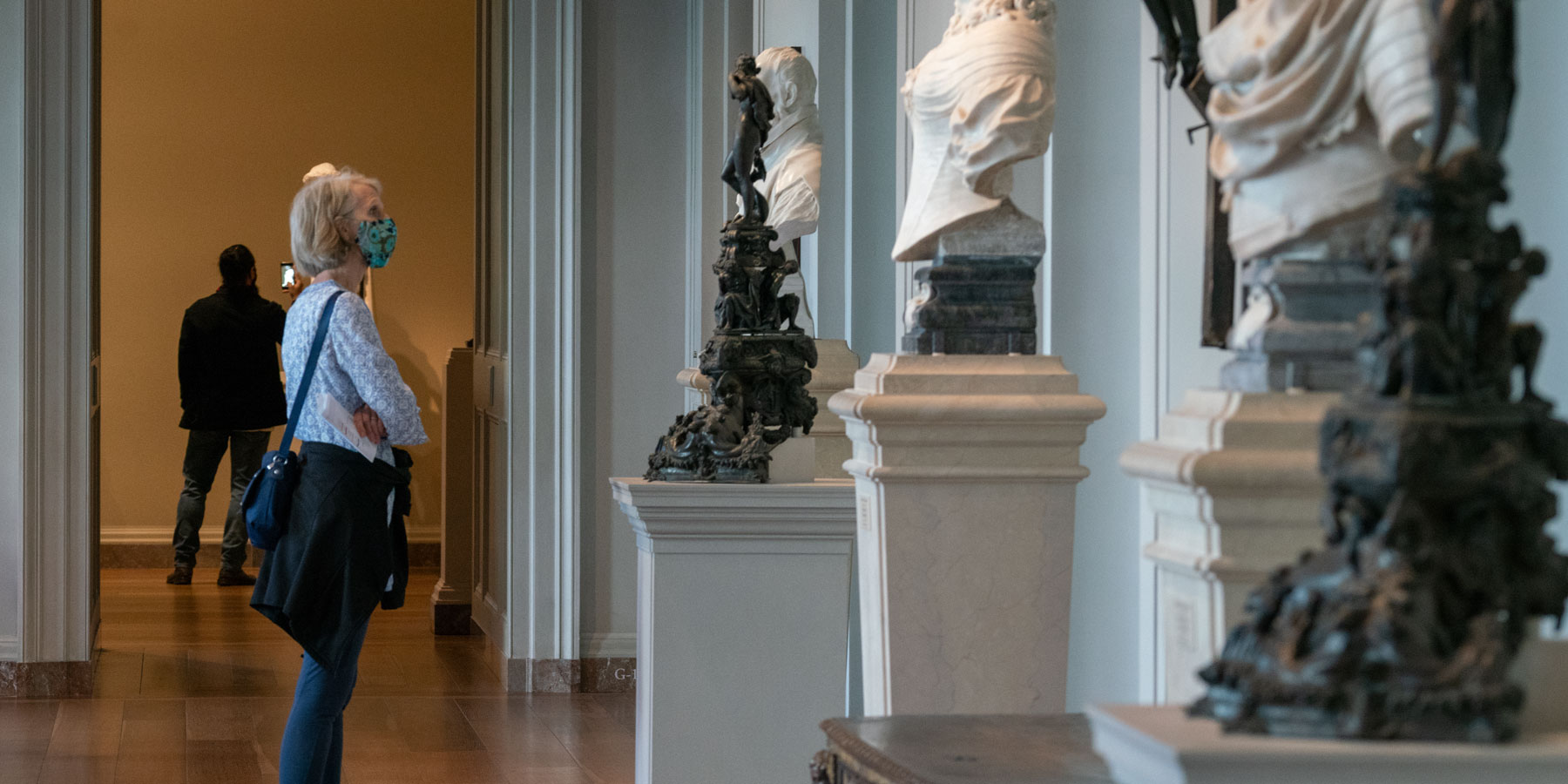 The financial position of the National Gallery of Art remained strong in fiscal year 2020 despite tremendous challenges resulting from the COVID-19 global pandemic. The National Gallery achieved this through prudent management of expenses combined with favorable performance of the investment portfolio; strong support from Congress and the administration; and the continued generosity of private citizens, foundations, and corporations.

The federal commitment to operate and maintain the National Gallery originates in the 1937 Joint Resolution of Congress that accepted Andrew W. Mellon’s unprecedented gift to the nation of his art collection, the funds to construct the West Building, and an endowment. The Joint Resolution pledged that the United States would provide funds for the upkeep, administrative expenses, and costs of operations, including the protection and care of the works of art given to the nation, so that the National Gallery would at all times be properly maintained and remain open to the public free of charge.

The National Gallery receives annual federal appropriations to support core programs and renovations of its buildings as part of the budget approved annually by Congress and signed by the president. Income from endowments as well as gifts and grants designated by donors for other specific purposes supplement the federal appropriations. Endowment support for expenditures is computed under the National Gallery’s spending policy and used in accordance with donor-imposed restrictions. The National Gallery is a nonprofit organization exempt from federal income taxes under the provisions of Section 501(c)(3) of the Internal Revenue Code.

The National Gallery’s net assets totaled $1.4 billion on September 30, 2020, increasing by $112.3 million or 8.5 percent during the fiscal year. This result is mainly due to the performance of the investment portfolio which ended the year at $1.056 billion, up $89.1 million net of new gifts, manager fees, and spending to support operations and art purchases. After experiencing steep declines in February and March due to the emerging pandemic, the portfolio rebounded strongly returning 11.3 percent for the fiscal year and exceeding the National Gallery’s custom investable benchmark by 260 basis points. Performance was positive across all asset classes, but US and international equities contributed the most powerfully to performance. The value of other investments and trusts held by others totaled $27.3 million, increasing $0.6 million over the prior year. Cash balances remained consistent with the prior year.

Property, plant, and equipment assets increased $22.9 million over the prior year, representing $40.2 million of capital expenditures partly offset by depreciation expense. Work continued on the renovation of the East Building atrium skylight and adjacent spaces. This project is included in the National Gallery’s comprehensive Master Facilities Plan, a federally funded, long-term capital renewal program designed to address life safety, security, and infrastructure improvements necessary to maintain and protect the National Gallery’s buildings. As part of this major East Building renovation project, construction began on an emergency exit stairway serving all levels of Tower 3. New entrance doors were installed to accommodate all visitors, and the location and capacity of public restrooms was improved to meet standards required by the Americans with Disabilities Act. The main East Building electrical service was upgraded, and work was begun on the installation of six gas-fired boilers in the East Building basement. The new boilers will replace steam provided by a third-party utility service and will increase reliability and energy efficiency while reducing cost. Eventually, the new boilers will provide hot water for all National Gallery heating and cooling needs.

Pledges receivable increased by $3.9 million due mainly to endowment and art acquisition pledges from generous National Gallery donors. Liabilities remained consistent with the prior year.

The National Gallery ended the fiscal year with an unrestricted operating loss of $1.5 million before depreciation and amortization due to impacts from the pandemic. As the danger of the virus became known, the National Gallery closed to the public beginning March 14 to protect the safety of staff and visitors. On July 20, parts of the West Building reopened with strict limits on visitor capacity. As a result, fiscal year attendance was a small fraction of normal levels, and the National Gallery’s retail operations suffered losses. These retail losses combined with reduced membership income from cancelled special events contributed most heavily to the operating loss.

Operating support and revenue totaled $168.2 million in fiscal year 2020, decreasing $6.8 million, or 3.9 percent, from fiscal year 2019. Federal support recognized for operations totaled $136.6 million versus $137.4 million in the prior year. Gifts from individuals, corporations, and foundations continued to play a critical role in supporting the National Gallery’s outstanding—but greatly curtailed—exhibition, education, curatorial, and conservation programs in fiscal year 2020. A major endowment gift was received this year, ensuring the successful completion of a matching requirement for The Andrew W. Mellon Foundation challenge grant celebrating the National Gallery’s 75th anniversary. Operating gifts and grants totaled $5.4 million, a decrease of $3.4 million from fiscal year 2019, primarily as a result of fewer exhibition and other on-site programs as well as a reduction in unrestricted membership gifts due to the pandemic.

Funds appropriated under the National Gallery’s investment spending policy totaled $21.9 million versus $20.6 million in fiscal year 2019. Royalties and other income totaled $0.6 million, down from $1.4 million in the prior year due primarily to reduced food service income and exhibition tour fees caused by the pandemic closure.

Fiscal year 2020 operating expenses totaled $169.7 million, decreasing $4.3 million from the prior year, as exhibitions and public programs were postponed or cancelled. In response to the physical constraints caused by the pandemic, the National Gallery greatly expanded its online digital offerings through its website and social media platforms to continue serving the public. Innovative and interactive virtual exhibition tours, lectures, and courses; films; and podcasts were created, and online audiences surged. The National Gallery’s collection was augmented by several major purchases in fiscal year 2020, including Anne-Louis Girodet de Roussy-Trioson’s Coriolanus Taking Leave of His Family (1786), Adriaen Coorte’s Still Life with a Hanging Bunch of Grapes, Two Medlars, and a Butterfly (1687), and Dirck Hals’s Merry Company on a Terrace (1625).