Monuments Officers and the NGA Several hundred men and women—including art historians, museum and art professionals, artists, archivists, and librarians—from many nations were involved in the Monuments, Fine Arts, and Archives (MFAA) program.  Several of these individuals were associated with the National Gallery of Art before or after the war. As the war progressed, members of the American cultural community became increasingly concerned about the fate of historical monuments, movable art, archives, and libraries in Europe.  In the fall of 1942, the American Defense–Harvard Group, established two years earlier by university faculty and personnel, began working with the American Council of Learned Societies (ACLS) to devise plans for protecting cultural property in European areas that would soon be occupied by Allied military forces. With its government connections, the Gallery served as the lobbying arm and center of operations in Washington, ultimately creating high-level support for efforts to protect and save threatened cultural heritage (Nicholas 1994, 211) . Toward this goal, and with the urging of Gallery Director David Finley, Harlan F. Stone, chief justice of the Supreme Court, asked President Roosevelt in December 1942 to form a government organization for “the protection and conservation of works of art and of artistic and historic monuments and records in Europe.”  On April 24, 1943, the president approved the establishment of the Commission for the Protection and Salvage of Artistic and Historic Monuments in War Areas, commonly known as the Roberts Commission after its chairman, Justice Owen J. Roberts.  At the president’s request, the Joint Chiefs of Staff agreed to assist in the commission’s work, leading to the formation of the military’s MFAA program (Finley 1973, 158).

Throughout the war, the Gallery provided offices and staff for the commission: David Finley was vice-chairman and de facto head of the commission; Secretary and General Counsel Huntington Cairns was secretary; and Chief Curator John Walker was a special advisor. The Roberts Commission completed its mission in June 1946.

To support efforts to protect art and monuments during the war, the Roberts Commission : 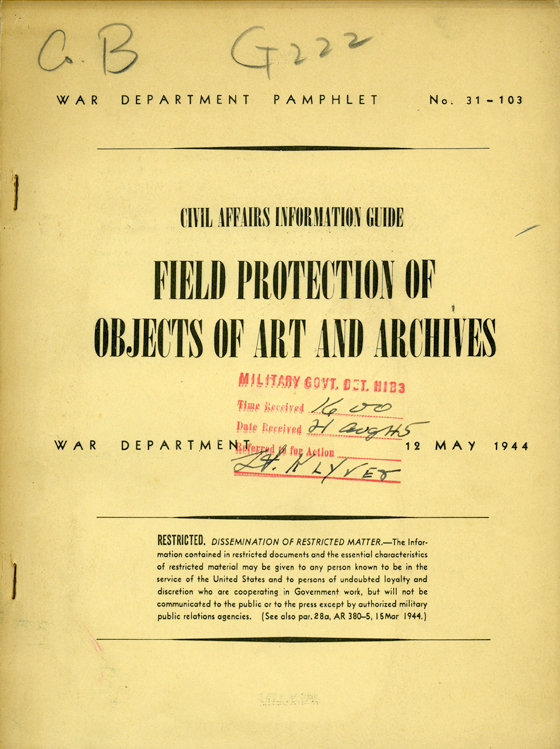 Learn more about the exhibition