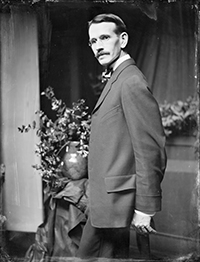 Arthur B. Davies’s mystical, mysterious paintings hearken back to 19th-century romanticism, even while Davies aligned himself with American artists advancing the most radical ideals of their day. Davies was born on September 26, 1862, in Utica, New York, the son of English and Welsh parents who had immigrated to the United States in 1856. He first took art lessons as a teenager from a local landscape painter, Dwight Williams. By 1879 Davies's family had moved to Chicago, where he attended the Chicago Academy of Design. He interrupted his studies in the early 1880s to work in New Mexico and Mexico as a draftsman for a railway expansion company. Davies later attended the School of the Art Institute of Chicago and then moved to New York City, where he enrolled in the Art Students League. During his first years in New York he supported himself as a magazine illustrator. Davies’s work was shown at the American Art Galleries, the National Academy of Design, and in an exhibition of the American Watercolor Society. After his marriage to the physician Lucy Virginia Meriwether in 1892, Davies moved to a farm in Congers, in upstate New York, and commuted to his studio in the city. Acting on the recommendation of the dealer William Macbeth, the department store magnate Benjamin Altman provided financial support that enabled the young artist to make two trips to Europe. Davies had his first solo exhibition at Macbeth Gallery in 1896. In the early 1900s, Davies began to lead a double personal life: though he remained married and continued to visit his wife and children on weekends, he moved in with Edna Potter, a model and dancer, in New York. They assumed the alias of Mr. and Mrs. David A. Owen and kept their relationship, and their daughter, a secret until Davies’s death.

Davies's most distinctive works are the dreamlike, fantasy visions of female nudes standing in pastoral landscapes that he began to paint around 1900. These enigmatic subjects possess a distinctly classical flavor and have literary and mythological allusions. Such works have a strong affinity with symbolism and are often compared with those of the French artists and . Despite his style and subject matter—which had more of an affinity with the 19th century than the 20th—Davies joined the circle of young, progressive artists who gathered around . Davies showed his work with theirs at the historic exhibition of The Eight at the Macbeth Gallery in 1908, and his paintings were included in the Exhibition of the Society of Independent Artists in 1910. He became president of the Society of Independent Artists in 1911 and played a pivotal role in organizing the Armory Show in 1913, which introduced Americans to the latest developments in European avant-garde art. Davies’s role as a fierce proponent of modernism in the work of others, rather than in his own artistic practice, was his greatest contribution to the field. After the Armory Show Davies briefly painted in a cubist-influenced style, but soon returned to the idyllic scenes for which he is best known. Davies also experimented with sculpture in a variety of styles and materials, including tapestry, and was an accomplished graphic artist. He served as advisor to the collector Lillie P. Bliss, helping her amass the collection that is now in the Museum of Modern Art, New York. Toward the end of his life he spent extended periods of time in Paris and Florence, Italy. He died of a heart attack in Florence on October 24, 1928.

1987
Czestochowski, Joseph S. Arthur B. Davies: A Catalogue Raisonné of the Prints. Newark and London, 1987.