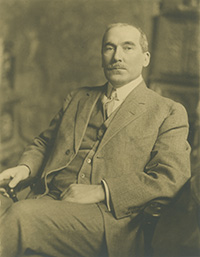 Henry Golden Dearth was born in Bristol, Rhode Island, on April 22, 1864. He took his earliest art lessons with the portraitist Horace Chauncey Johnson, and traveled to Paris in 1883 to study at the École des Beaux-Arts with Ernest Hébert and privately with Aimé Morot. His work was first shown in 1888 at the National Academy of Design, and the following year in the Society of American Artists exhibition. For most of his life, Dearth kept a studio at Montreuil-sur-Mer in Pas-de-Calais on the English Channel, where he spent his summers. In 1896 Dearth married Cornelia van Rensselaer Vail, and they had a daughter, Nina van Rensselaer Dearth. He won a number of prestigious awards during his career, including the Webb prize from the Society of American Artists in 1893, a bronze medal at the 1900 Paris Exposition Universelle, and silver medals at the 1901 Pan-American Exposition in Buffalo, New York, and the 1910 Buenos Aires Exposition.

Dearth was a prolific landscapist who specialized in painting poetic twilight and moonlit coastal scenes of Long Island, New York, and Normandy and Brittany in France. His early work was tonalist in style. In 1905 Samuel Isham classified Dearth as first among a group of American artists who “all paint the decorative landscape, rather low in key, rich in color, and with the paint laid on solidly and with a pleasant, though varied, surface.”[1] Around 1912 the artist began to paint figurative works and still-life subjects but specialized in producing representations of rock pools in Brittany. In these later works Dearth achieved richly textured, decorative surfaces by applying paint to his canvases directly from the tube. At the end of his career he painted compositions of objects from his collection of Asian and medieval art. Dearth died suddenly of a heart attack in New York City on March 27, 1918.