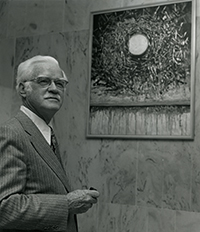 Lamar Dodd, photograph, courtesy of the Georgia Museum of Art, University of Georgia

William Lamar Dodd was a painter and university administrator committed to advancing arts education in his home state of Georgia and throughout the South. Dodd was born in Fairburn, Georgia, on September 22, 1909. Dodd’s artistic talent was recognized early, and he began taking art classes at the local college, LaGrange Female College, as early as the sixth grade. After one year at the School of Architecture at the Georgia Institute of Technology and a year teaching high school art in Alabama, Dodd moved to New York in 1928 and enrolled in the Art Students League. He studied with George Bridgman and and took private classes with and Charles Martin. Dodd returned to Georgia in 1930 and married Mary Ridley Lehmann the following year. After his first solo exhibition at the High Museum of Art in Atlanta in 1931, Dodd returned to the Art Students League in New York, this time studying with and and working as a sign painter to support his family during the Great Depression. In 1934 Dodd left New York for Birmingham, Alabama, where he worked for several years in an art supply store and painted at night.

Dodd gradually rose to prominence during the 1930s by winning several awards in national competitive exhibitions. This increased recognition led to his appointment as artist-in-residence at the University of Georgia in 1937; he became chair of the department the following year. Dodd was an able administrator who, during the course of his nearly 40-year career at the university, transformed the art school into one of the best in the country. The program was officially named the Lamar Dodd School of Art in 1995. By the 1940s Dodd was firmly established as a nationally recognized artist and educator. He was a leading figure in a wide variety of art organizations and later served as a cultural envoy for the Department of State. With a $10,000 grant from the General Education Board of the Rockefeller Foundation, Dodd made his first trip to Europe in 1953 and spent six months visiting churches, museums, and sites important to artists he admired. In 1954 he was elected to the first of two terms as president of the College Art Association, becoming the first painter to hold that office. In 1962 he was named chairman of the National Council of the Arts in Education.

Dodd continued to paint and exhibited regularly at the Grand Central Moderns gallery in New York, the National Arts Club, and the Pennsylvania Academy of the Fine Arts. In 1959 he was elected a full member of the National Academy of Design. In 1963 he was one of seven artists invited by NASA to record the Mercury-Atlas 9 mission; some of Dodd’s works for the project were included in the Eyewitness to Space exhibition at the National Gallery of Art in 1965. He continued to work as a NASA artist for future missions, including the Apollo 11 moon landing in 1969. In the introduction to Dodd’s 1970 retrospective at the High Museum and the Georgia Museum of Art, Lloyd Goodrich deemed the 25 paintings that resulted from the Apollo 11 project to be Dodd's most original and impressive works.

Never associated with any specific art movement, Dodd was an independent painter who worked in a wide range of styles and subjects. He began his career by painting landscapes and cityscapes of his native Georgia, and progressed to still lifes, seascapes in Monhegan, Maine, and space exploration themes. In the late 1970s, after his wife underwent open-heart surgery, Dodd began studying and observing heart surgeries and completed a series of works in response. Some of his last paintings dealt with the O. J. Simpson trial and the Oklahoma City bombing. Dodd died at his home in Athens on September 21, 1996.