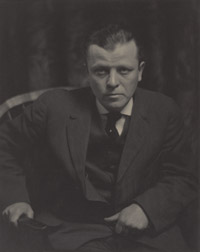 Arthur Garfield Dove was born in Canandaigua in the Finger Lakes region of New York on August 2, 1880, and was raised in nearby Geneva. His father, a brickyard owner and building contractor, named him after the Republican presidential and vice presidential candidates in the election that year, James Garfield and Chester Arthur. He became interested in art at an early age, and was encouraged by a neighbor who was a naturalist and amateur painter. Dove’s father wanted him to become a lawyer, but after graduating from Cornell University in 1903 he moved to New York City and worked as a freelance magazine illustrator. In 1904 he married Florence Dorsey, a woman from Geneva. Dove went on an extended trip to Europe from 1907 to 1909. In Paris he befriended , who introduced him to prominent European modernists. Dove also exhibited impressionist and fauve works at the Salon d'Automne. He returned to New York in 1910 and began to experiment with abstraction, “extracting” his forms from the external world. Dove entered the circle of and in 1912 exhibited a series of nonobjective pastels at Stieglitz’s 291 gallery, thus becoming the first 20th-century American artist to make purely abstract paintings, a practice he continued throughout his career.

Dove’s innovative works baffled the American public and he struggled financially. His attempt to run a farm in Westport, Connecticut, took up a considerable amount of his time. He exhibited at the Forum Gallery show in 1916 and at the Society of Independent Artists in 1917. Dove’s marriage disintegrated in 1920, and after the death of his first wife in 1929, he married his longtime companion, the artist Helen “Reds” Torr, with whom he had lived for seven years on a 42-foot yawl sailing around Long Island Sound.

Dove produced meticulously crafted collages and assemblages made of various materials and found objects from 1924 to 1930. In 1926 he met the noted collector and champion of modernism Duncan Phillips, who became his main patron and supported him during the Great Depression. Dove inherited his father’s debt-ridden estate in 1933 and moved to Geneva, where he tried to make a living as a farmer. In 1938, poor health forced him to move to Centerport, on Long Island Sound. The following year he suffered a heart attack complicated by a kidney disorder and spent the remainder of his life as a semi-invalid. Dove died of a second heart attack in Huntington, Long Island, on November 22, 1946.