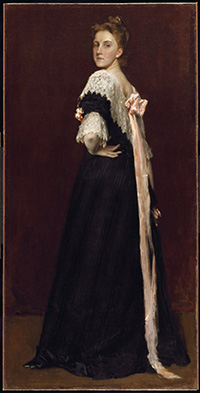 Lydia Field Emmet led a remarkably successful artistic career spanning more than 50 years. She is best known as a painter of portraits, particularly of children. Emmet was born in New Rochelle, New York, into a family of female artists. Her mother, Julia Colt Pierson Emmet, her sisters Rosina Emmet Sherwood and Jane Emmet de Glehn, and her cousin Ellen Emmet Rand were all painters. Lydia Emmet’s talent (and enterprise) was apparent early, as she began selling illustrations at the age of 14. In 1884 she accompanied Rosina to Europe, and they studied at the Académie Julian in Paris for six months. During the late 1880s Emmet sold wallpaper designs, made illustrations for Harper’s Weekly, and created stained glass designs for Tiffany Glass Company. From 1889 to 1895 Emmet studied at the Art Students League, where her instructors included and . Chase appointed her an instructor at his Shinnecock Summer School of Art on Long Island, where she taught preparatory classes for several terms. Emmet also posed for one of his most elegant portraits, now in the collection of the Brooklyn Museum. In 1893 both Emmet and her sister Rosina painted murals for the Women’s Building at the World’s Fair in Chicago. Emmet’s mural was entitled Art, Science, and Literature.

In the 1890s Emmet transitioned from her illustration and design work to focus on paintings in oil and pastel, largely portraits, and she exhibited regularly at the National Academy of Design. She also began a profitable portrait miniature practice that she continued until 1904. Soon after the turn of the century, her full-size portraits were sought-after commissions by members of the East Coast elite. Emmet’s style shows the influence of her teacher, Chase, as well as similarities to and . She was elected a full member of the National Academy in 1912, and she won many awards in national competitive exhibitions throughout her career. She continued to paint in New York City and at her summer home, Strawberry Hill in Stockbridge, Massachusetts, until her death on August 16, 1952.