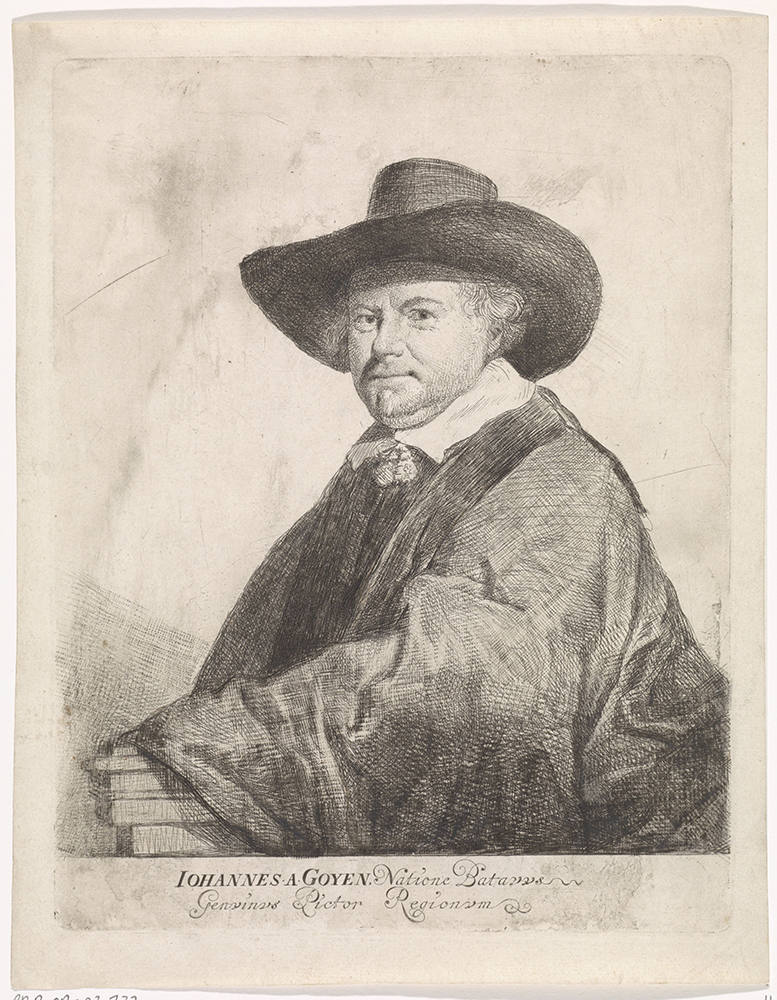 Born on January 13, 1596, Jan Josephsz van Goyen began training as an artist in his native city of Leiden at the early age of ten. The series of teachers with whom he studied included, according to Orlers’ near-contemporary account, Isaac van Swanenburgh (c. 1537–1614). Orlers also says that Van Goyen spent a year in France before going to Haar­lem, where he is known to have been a student of in 1617. His early works closely resemble those of Van de Velde.

By 1618 Van Goyen had returned to Leiden, where that same year he married Annetje Willemsdr van Raelst. His name occurs frequently in Leiden documents between 1625 and 1632. In 1625 he bought a house on the Sint Peterskerkstraat, which he sold in 1629 to the marine painter Jan Porcellis (c. 1584–1632). Probably in the summer of 1632 he moved to The Hague, becoming a citizen two years later. Although he also worked in Haarlem in 1634, at the house of Salomon van Ruysdael’s brother Isaack (1599–1677), he is thereafter recorded only in The Hague. He bought a house there on the Wagenstraat in 1635 and built another the following year on the Dunne Bierkade, where is known to have lived from 1649 to 1652. Although a prolific and successful painter, Van Goyen engaged throughout his life in various business ventures, usually unsuccessfully; these in­cluded art dealing, auction sales, and speculation in real estate and tulip bulbs.

During the 1630s, Van Goyen, along with the Haarlem artists and , developed a new approach to the representation of landscape that fo­cused on local subjects and utilized a tonal palette, initiating what has come to be recognized as the golden age of Dutch landscape painting. Van Goyen was a highly respected figure in the artistic commu­nity of The Hague. In 1638 and 1640 he was chosen to be hoofdman of the painters’ guild, and received further official recognition in 1651, when he was commissioned to paint a panoramic view of the city for the burgomaster’s room in the Town Hall. In 1649 two of his daughters were married to artists, Margaretha to and Maria to the still-life painter Jacques de Claeuw (c. 1620–1670 or after). Despite his artistic success, Van Goyen died insolvent in The Hague on April 27, 1656.