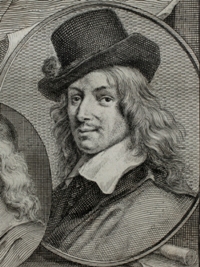 Son of Franchoys Hals, a cloth worker from Mechelen, and Adriana van Geertenryck of Antwerp, Frans Hals was probably born in Antwerp in about 1582 or 1583. Sometime after the fall of Antwerp to the Spanish in August 1585, the family moved to Haarlem, in the northern Netherlands. Dirck Hals (1591–1656) followed in his brother Frans’ footsteps and became a painter; a third brother, Joost (died before October 16, 1626), apparently worked as an artist as well, but no works by him have been identified.

According to the posthumous second edition of Karel van Mander’s Het schilder-boeck (1618), Frans Hals had studied painting with the author (1548–1606); if so, this training probably occurred before 1603, when Van Mander left Haarlem for a country estate outside the city to finish writing his book. Van Mander’s teachings, however, did not appear to have much effect on Hals, who rarely depicted the type of subjects that Het schilder-boeck urged young artists to choose and whose style bears no obvious resemblance to that of his mentor. Nonetheless, it should also be noted that extremely little is known of Hals’ activities prior to his late twenties, and it is conceivable that as-yet unearthed or unidentified juvenilia will necessitate a reappraisal of his early career.

Hals is first documented as an artist in 1610, when he entered Haarlem’s Saint Luke’s Guild. His wife, Annetje Harmansdr, died in June 1615, leaving him with two young children, one of whom, Harmen (1611–1669), became a painter. The next year Hals made his only recorded trip outside Holland, traveling to Antwerp, where he stayed from August until November. He remarried in 1617 to Lysbeth Reynier, a feisty woman who was reprimanded by the city authorities on several occasions for brawling. She bore the artist at least eight children—one baptized nine days after the wedding—including the artists Frans the Younger (1618–1669), Reynier (1627–1671), and Nicolaes (1628–1686). Another artist named Jan or Johannes (active c. 1635–1650) was also probably a child of this marriage, and a daughter, Adriaentje, married the Haarlem genre and still-life painter Pieter Gerritsz van Roestraten (1629/1630–1700), bringing the total number of artists in the family to about a dozen, if one includes Hals’ brothers and nephews.

Although Hals specialized in portraiture, he also painted genre scenes and images of the four evangelists. In his early maturity, from 1616 to 1625, he was associated with a Haarlem rederijkerskamer (rhetoricians’ chamber) called De Wijngaertranken (the Grapevines). Appreciation of his painting skills, to which a number of important group portrait commissions testify, was documented as early as 1628, when Samuel Ampzing’s general description of the city of Haarlem included a passage praising Hals’ ability to capture the spirit of his portrait sitters. Despite this recognition, Hals was continually plagued by financial difficulties. Even during the 1630s, when his services as a portraitist seem to have been in the greatest demand, he is known to have been sued by his butcher, his baker, and his shoemaker in pursuit of unpaid debts. In 1654 he paid a debt to a baker by surrendering his household goods and several paintings, and from 1662 until his death he received relief from the burgomasters—an initial gift of 50 guilders, plus an annual allowance of 150 guilders per year, increased to 200 guilders in 1663.

Hals died in Haarlem on August 29, 1666, and was buried in the Church of Saint Bavo on September 1. His only documented pupils were his son-in-law Van Roestraeten and Vincent Laurensz van der Vinne (1628–1702). Houbraken states that , Dirck van Delen (1604/1605–1671), , , and Hals’ sons also trained in his studio. His style can be felt in the work of his brother Dirck and that of and her husband, Jan Miense Molenaer (c. 1610–1668). Despite his artistic success, Hals was almost totally forgotten after his death. It was not until the 1860s and the rise of realism and then impressionism in the late nineteenth century that the vigorous and free brushwork that brought his portraits of Dutch burghers so vividly to life was once again appreciated by critics, collectors, and contemporary artists.