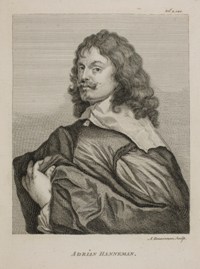 Adriaen Hanneman was born in The Hague in 1603 or 1604. In 1619 he became a pupil of the portrait painter Anthony van Ravesteyn the Younger (c. 1580–1669) and from this point on worked exclusively as a portraitist.

In 1626 Hanneman went to England, where he lived and worked until 1638. In 1630 he married an Englishwoman named Elizabeth Wilson, the first of three marriages, none of which seems to have produced any children. The arrival of in London in 1632 marked a crucial event in Hanneman’s career. The Flemish master’s work would have a lasting effect on Hanneman, to the point that in 1661 Cornelis de Bie described him as a counterfeiter of Van Dyck’s style. Although such a pejorative assessment is perhaps misplaced, it is certainly true that some of Hanneman’s better works, including the Gallery’s , are so strikingly Van Dyckian that their correct attribution has in the past occasionally gone undetected.

In 1640, shortly after his return to The Hague, Hanneman was married for the second time, to Maria, daughter of Jan Anthonisz van Ravesteyn (1570–c. 1657), the elder brother of his teacher. Hanneman entered the city’s Guild of Saint Luke in the same year and soon assumed leadership positions. In 1643 he was elected hoofdman, and two years later he was named deken, the highest position in the guild. In 1656 Hanneman played an important part in setting up a rival guild for painters, engravers, and sculptors—the Confrerie—serving as deken and hoofdman several times during the 1660s.

Hanneman continued to paint portraits in an aristocratic, Anglo-Flemish manner in The Hague, where a great demand existed for portraits made in the style of Van Dyck. Hanneman’s patrons included the exiled members of the English court, a number of whom visited Maria Stuart, the daughter of Charles I and the wife of Willem II, the Prince of Orange.

Hanneman’s work was favorably received. By 1641 he was wealthy enough to buy a house in The Hague’s fashionable Nobelstraat and to purchase the adjoining property in 1657. After 1668, however, he appears to have had serious financial problems, and it is possible that an illness from which he is known to have suffered in that year left him unable to paint. He was married again in 1669, to Alida Besemer, but died not long after, in July 1671.