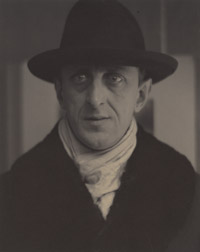 Marsden Hartley was born on January 4, l877, in Lewiston, Maine, to English immigrant parents. In 1893 he moved with his family to Ohio, where he studied at the Cleveland School of Art. Hartley took private lessons with John Semon, a Barbizon-style painter, and in 1898 he took a summer class with Cullen Yates, a local impressionist. Hartley excelled at the Cleveland School of Art, and a trustee provided him with financial backing to study in New York for five years. He moved to Manhattan in 1899 and attended School of Art before transferring to the National Academy of Design. In 1902, after Hartley won the Academy’s Suydam Silver Medal for still-life drawing, he spent the summer painting landscapes in Center Lovell, Maine.

During the summer of 1907 in Eliot, Maine, Hartley attended a retreat for mystics called Green Acre, where he immersed himself in the study of Eastern religions. In 1908 he went to Boston and met , whose neoimpressionist style influenced his Maine landscapes. A major turning point in the artist’s career occurred in 1909, when Hartley was introduced to the photographer and art impresario , who arranged a one-man exhibition at his 291 gallery.

With the financial support of Stieglitz and , Hartley traveled to Paris in 1912 and encountered the work of , , and , along with other French modernists at the home of the prominent American collectors Gertrude and Leo Stein. In 1913 Hartley moved on to Berlin, Germany, and became associated with the expressionist artists and , with whom he exhibited at the Herbstsalon, an important display of avant-garde German art. After returning for a time to the United States, Hartley was back in Berlin in 1914. Following the death in the early stages of World War I of a German officer friend with whom he may have had a romantic relationship, the grief-stricken Hartley commenced his famous War Motif series, in which symbols represent both the spiritual and physical aspects of his subjects.

The war forced Hartley to once again sail for New York in late 1915. Soon the peripatetic artist began wandering restlessly from place to place, a habit that would characterize the next two decades of his career.  Beginning in 1916 Hartley worked in, among other places, Provincetown, Massachusetts; Bermuda; Ogunquit, Maine; Taos and Santa Fe, New Mexico; and California. In 1919 he briefly affiliated himself with the avant-garde art organization founded by the American modernist , the Sociéte Anonyme. In 1921 Hartley traveled to Paris and once more to Berlin, where he lived for two years. In 1926 he traced Cézanne’s footsteps in Provence, painting the iconic Mont Sainte-Victoire. Back in the United States in 1930, Hartley settled in Brooklyn Heights, and worked for a time in Sugar Hill, New Hampshire. In 1931 a Guggenheim travel grant enabled him to reside in Mexico for a year. Between 1931 and 1937 Hartley was active in Gloucester, Massachusetts; Bavaria, Germany; Bermuda; and Nova Scotia. In Nova Scotia Hartley suffered another profound personal loss when a local fishing family he was close to, the Masons, lost their two sons at sea.

In 1937, after years of financial hardship and perceived slights, Hartley finally broke with Stieglitz after another solo exhibition, this time at An American Place, failed to produce sales. That summer he retreated, as he had so often in his youth, to Maine where he worked in a number of places before settling in Bangor. There he commenced a series of paintings of Mount Katahdin that occupied him for the next three years. In 1940, in addition to his Maine landscapes, Hartley executed a series of figure paintings that were based on sunbathers and lobstermen, as well as a group of religious subjects inspired by his time with the Mason family in Nova Scotia. During the final years of his life Hartley was plagued by failing health, and died from terminal heart failure in Ellsworth, Maine, on September 2, 1943.

A leading member of the Stieglitz group, Hartley was a pioneer American modernist whose knowledge of French avant-garde styles and close association with the innovative German painters known as Der Blaue Reiter led him to invent one of the most innovative painting styles of the early 20th century. Beginning with his return to the United States in 1915, Hartley moved away from his former abstract style and, forever moving from place to place, produced a remarkable variety of expressive landscapes, still life compositions, and unconventional portraits. His exceptionally fine late Mount Katahdin landscapes secured his legacy as one of the greatest of all American modernists.

1997
Hartley, Marsden. Somehow a Past: The Autobiography of Marsden Hartley. Edited and with an introduction by Susan Elizabeth Ryan. Cambridge, Massachusetts, 1997.