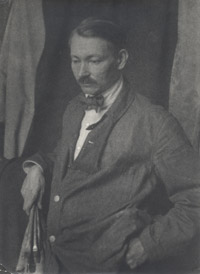 Robert Henri was born Robert Henry Cozad in Cincinnati, Ohio, on June 24, 1865, the son of a professional gambler and real estate developer. The family lived in Nebraska and Colorado, but fled east when the father shot and killed a rancher over a land dispute and was indicted for manslaughter. They changed their last name because of the ensuing scandal and eventually settled in Atlantic City, New Jersey, during the early 1880s.

In 1886 Henri enrolled at the Pennsylvania Academy of the Fine Arts in Philadelphia, where he studied under Thomas Anshutz, Thomas Hovenden, and James B. Kelly. In 1888 he went to Paris and enrolled at the Académie Julian under William-Adolphe Bouguereau and Tony Robert-Fleury. During the summers he painted in Brittany and Barbizon, and he also visited Italy prior to being admitted to the École des Beaux-Arts in 1891. He returned to Philadelphia late that year, and in 1892 resumed studying at the academy. Henri initiated his long and influential career as an art teacher at the School of Design for Women, where he taught until 1895. During this period he met a group of young Philadelphia newspaper illustrators who, with Henri’s encouragement, would pursue painting careers in New York: , , , and . He also made regular trips to Paris, where he was particularly influenced by the works of , , and . In 1898 one of his paintings was purchased for the Musée Nationale du Luxembourg.

In 1900 Henri settled in New York. He taught at the New York School of Art (formerly the Chase School) from 1902 to 1908. He rejected both the genteel tradition of academic painting and impressionism, and instead created unconventional urban realist subjects executed in a bold, painterly style. Around 1902 he began to specialize in portraiture. In 1906 Henri was elected to the National Academy of Design, and that summer he taught in Spain. When the academy jury rejected works by Henri’s friends and colleagues—Sloan, Glackens, Luks, and Shinn—for its 1907 annual show, he resolved to organize an independent exhibition. The result was the famous show of The Eight that was held at Macbeth Gallery in February 1908. In 1910 Henri organized the first Exhibition of Independent Artists, an egalitarian group modeled after the Salon des Independents in Paris and operating under the principle, “no jury, no prizes.” Henri’s influence began to wane with the gradual ascent of more radical modernist styles after the 1913 Armory Show. Nevertheless, he continued to win numerous awards and taught at the Art Students League from 1915 until a year before his death from cancer on July 12, 1929.

Although Henri was an important portraitist and figure painter who was admired for his straightforward, vital likenesses of unusual sitters, he is best remembered today as the influential, progressive, and charismatic founder of the so-called Ashcan school of urban realism. A champion of “art for life’s sake,” he was noted for his democratic approach to portraiture, and chose sitters from diverse racial groups and walks of life. In 1909 he was strongly influenced by the color theories of Hardesty Maratta, and his palette brightened considerably. Henri was a tremendously influential teacher, and his ideas on art were collected by former pupil Margery Ryerson and published as The Art Spirit (Philadelphia, 1923).

1997
Perlman, Bennard B., ed. Revolutionaries of Realism - The Letters of John Sloan and Robert Henri. Princeton, 1997.