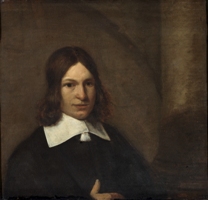 Pieter Hendricksz de Hooch (occasionally spelled de Hoogh) was baptized in the Reformed Church in Rotterdam on December 20, 1629. His father was a master bricklayer and his mother a midwife. His only recorded teacher was the land­scape painter , with whom he studied in Haarlem along with fellow pupil Jacob Ochtervelt (1634–1682). The exact dates of this apprenticeship are not known. Berchem’s interest in landscape apparently had little effect on De Hooch, whose earliest paintings are almost all bar­rack-room scenes.

De Hooch is first recorded in Delft on August 5, 1652, when he and another painter, Hendrick van der Burch (1627–after 1666), witnessed the signing of a will. The following year he is documented as a painter and dienaar (servant or assistant) to a wealthy merchant named Justus de la Grange, a resident of both Delft and Leiden whose collection contained eleven of the artist’s paintings when it was inventoried in 1655. De Hooch witnessed a baptism in Leiden in 1653, but in 1654, when he married Jannetje van der Burch of Delft, he was living in Rotterdam. He and his wife, who was probably the sister of the painter Hendrick van der Burch, had seven children.

De Hooch entered the Delft guild in 1655 and is recorded as having paid dues in 1656 and 1657. He remained in that city until the end of the decade, but sometime between mid-1660 and April 1661 he set­tled in Amsterdam. Apart from a visit to Delft in 1663, he apparently remained in Amsterdam for the rest of his life. It was long believed that De Hooch died at the age of fifty-four while an inmate at the Amsterdam dolhuis (lunatic asylum).[1] However, that institution's records shows that the Pieter de Hooch who died in the asylum was the artist's son, also named Pieter.[2]

Between about 1655 and 1662, De Hooch’s work rose to the very highest level of achievement. Almost all of his paintings from these years depict interiors or courtyards containing just a few people, engaged either in domestic activities or in some restrained form of entertainment or merrymaking. The atmosphere in these works is characteristically calm, spacious, and airy, effects created through De Hooch’s masterly control of light, color, and com­plex perspectival construction. These are also all essential elements of the style of , with whom he must have had contact.

By the end of the 1660s De Hooch’s work had lost much of its delicacy and finesse. His later compositions be­came grander and more contrived, and his color harmonies and light effects harsher. His last dated painting is from 1684. Although De Hooch had no known pupils, artists whose works have been confused with his include Hendrick van der Burch, Ludolf de Jongh (1616–1679), Pieter Janssens Elinga (1623–before 1682), and Esaias Boursse (1631–1672).