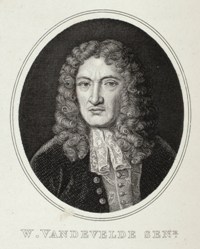 The marine draughtsman Willem van de Velde the Elder was born in Leiden in 1611, the son of the master of a transport vessel, Willem Willemsz van de Velde. As a boy, Willem may have accompanied his father on sea expeditions, which likely influenced his career as a marine artist.[1] Van de Velde married Judith van Leeuwen in Leiden in 1631; the couple had three children: a daughter, Magdalena, and two sons who would become painters, and . The family moved to Amsterdam in the mid-1630s. By 1646 they were living in the Nieuwe Waelseliant near the waterfront by the Montelbaanstoren, where they would remain until 1672.

Van de Velde’s earliest drawings from the 1630s and 1640s depict individual ships and the Dutch fleet at rest. For most of his career, however, he portrayed contemporary naval battles, usually made under the employ of the Dutch admiralty. He frequently traveled with the Dutch navy to witness events firsthand, making drawings as points of reference that he would develop into meticulously detailed pen paintings, or penschilderijen, back in the studio. Although in the latter years of his life he also worked in oils, he predominantly kept to this specialized art form.[2] Indeed, documents refer to Van de Velde as a “draughtsman,” “ship draughtsman,” and “artist and ship draughtsman,” but rarely as a “painter.”[3]

During the First Anglo-Dutch War of 1652–1654, Van de Velde sailed in the company of Admiral Marten Tromp, making a number of drawings of both the Dutch and the English fleets, most notably at the Battle of Scheveningen.[4] In 1658 Van de Velde accompanied the Dutch navy to Copenhagen when Admiral Jacob van Wassenaer defended the Danes’ right of way into the Baltic against Charles X’s Swedish forces; the drawings that Van de Velde produced of this battle earned him the praise of the Danish king. His representation of major naval battles continued with the outbreak of the Second Anglo-Dutch War in 1665. One of his largest commissions, from Admiral Michiel de Ruyter, was to record the Four Days’ Battle in 1666. The twenty-four drawings that survive represent moments from the battle itself as well as the individual vessels that gathered around De Ruyter’s flagship. De Ruyter employed the artist again during the Third Anglo-Dutch War, to record the Battle of Solebay on June 7, 1672.

During the winter of 1672, Van de Velde left Amsterdam for England, joining his son Willem the Younger, who had probably arrived several weeks earlier. The exact reasons for his departure remain uncertain, though the threat of the French invasion and the prospect of greater professional opportunities in England, as well as troubles at home, might have encouraged him to move.[5] In England, Charles II awarded him a salary of ₤100 per annum for “taking and making Draughts of Sea Fights,” while Willem the Younger was responsible for “putting the said Draughts into Colours.”[6] He was also to receive a promised annual stipend of ₤50 from James, the Duke of York.[7] Together with his son, Van de Velde established a studio in the Queen’s House in Greenwich, where they carried out royal commissions, including a series of designs for a suite of tapestries representing the Battle of Solebay.

Aside from his royal appointments, Van de Velde attracted other prominent patrons during his career, including Pieter Blaeu, the son of the great publisher Johannes Blaeu, and Cardinal Leopold de Medici, who once visited the artist’s studio. Van de Velde’s patrons must have admired his ability to capture the energy and complexity of the events he witnessed. His drawings, which were executed in chalk, pen, or wash, demonstrate his keen observation, which resulted in the precise historical records that were his final pen paintings. Although he was not the only artist to use this technique, he developed it to a degree that exceeded the rest of his contemporaries. Van de Velde died in England on December 13, 1693.

[4] The States General had invited him on this expedition to record the events; he was given unrestricted access to the entire fleet “in the interests of his drawing.” Michael Strang Robinson, Van de Velde Drawings: A Catalogue of Drawings in the National Maritime Museum Made by the Elder and Younger Willem van de Velde (Cambridge, UK, 1958), 1–29.

[5]Van de Velde and his wife had agreed to legal separation in 1662, but seemed to have remained together because on September 12, 1672, he demanded that she produce evidence to support her claims of his marriage infidelity. Further doubts about their separation result from his return to Amsterdam in 1674 to bring his wife back to London.

[7] Westby Percival-Prescott,The Art of the Van de Veldes: Paintings and Drawings by the Great Dutch Marine Artists and Their English Followers (London, 1982), 14.