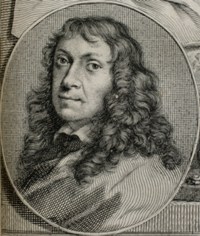 Willem Kalf, baptized in Rotterdam on November 3, 1619, was one of the foremost still-life painters of the seventeenth century. His father, Jan Jansz Calff (Kalf), was a well-to-do textile merchant and town council member who died in 1625. Shortly after the death of his mother, Machtelt Gerrits, in 1638, Kalf settled in Paris, where he was active as a painter until his return to Rotterdam in 1646. Five years later his name appears in the marriage book for the city of Hoorn: “Willem Jansz Kalf, bachelor of Rotterdam, and Cornelia Pluvier, girl of Vollenhoven, both living at Hoorn, on October 22, 1651.” Not long after his marriage he is mentioned as a member of the Saint Luke’s Guild in Amsterdam. Unlike many of his contemporaries, Kalf lived in comfortable circumstances. He seems to have stopped painting around 1680 to concentrate his energies on being an art dealer. He died in Amsterdam on July 31, 1693, and was buried on August 3 in the Zuiderkerk.

Houbraken stated that was Kalf’s teacher, but there is little in Kalf’s early work to suggest such a relationship. Because of the stylistic and coloristic resemblances between the work of Frans Rijckhals (c. 1600–1647) and Kalf’s early peasant kitchen interiors and his later elaborate (pronk) still lifes, it seems that this Rotterdam artist was an important influence on the young artist.

Kalf’s mature work developed during the 1650s, after his move to Amsterdam. He focused on a few objects, which he organized with great restraint against a dark background, and delighted in depicting the sheen of silver, the translucency of glass, and the rich textures of intricately patterned Oriental rugs. His luminous manner of painting highlights has often been compared to that of , and it is entirely possible that Kalf’s work influenced the Delft master.

Although Kalf probably had pupils who made replicas of his work, none are documented. His most successful follower was Jurriaen van Streek (1632–1687).