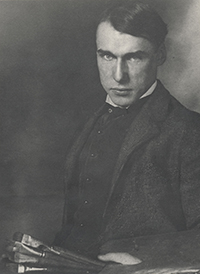 Raised in Brooklyn, Walt Kuhn (born William but called Walt from a young age) developed an early interest in drawing and theater. In 1893 Kuhn took art classes at the Brooklyn Polytechnic Institute. Six years later he was working in San Francisco as a cartoonist for The Wasp, a weekly satirical magazine. Kuhn returned to New York in the fall of 1900, but by March of 1901 he had left again to study art in Europe, first at the Academie Colarossi in Paris and then later that year at the Akademie der Bildenden Künste (Academy of Fine Arts) in Munich. After moving back to Manhattan in the summer of 1903, Kuhn studied at the Artists’ Sketch Class and began painting landscapes in an impressionist style. For the next decade he supported himself as an illustrator and cartoonist for publications including Life and New York World. In 1909 Kuhn married Vera Spier, a jewelry designer who also managed the records of his artistic production.

Through his commercial illustration work Kuhn became acquainted with , , and other progressive artists in their circle. Kuhn assisted Henri and Sloan in organizing the Exhibition of Independent Artists in April 1910. The following year Kuhn and a small group of fellow artists founded the Association of American Painters and Sculptors (AAPS), which aimed to promote contemporary artists through non-juried exhibitions. With as its president, the AAPS organized the International Exhibition of Modern Art, a major show that included representative works from avant-garde artistic movements in Europe. Serving as the Association’s secretary, Kuhn traveled abroad in 1912 to assist with the selection of European artists. Known as the Armory Show, the exhibition opened in New York on February 17, 1913, and introduced cubism, fauvism, expressionism, and other forms of European modernism to American audiences. Kuhn later recounted the exhibition’s creation and lasting impact in his pamphlet Twenty-Five Years After: The Story of the Armory Show (1938). Kuhn continued his work with the AAPS after the Armory Show, which he lamented left him little time for his own work. He also served as an art advisor to prominent American collectors, including John Quinn and Lillie P. Bliss, a founder of the Museum of Modern Art.

Over the next decade, Kuhn experimented with a number of modern styles—including cubism and fauvism—as well as a variety of mediums. In 1925, following a brush with death caused by a duodenal ulcer, Kuhn devoted himself to developing a style of his own. He returned to Europe to study old master paintings and ancient art and minimized his involvement in other activities. By the end of the decade his signature portrait technique had emerged: Kuhn boldly rendered single figures against stark backdrops. His subjects—burlesque and vaudeville performers, circus acrobats, and clowns—reflected his love for the circus and the stage. Despite the colorful costumes and staged poses of his sitters, Kuhn’s portraits are dignified and psychologically probing. The artist also painted many still lifes in a similarly bold, geometric manner.

Kuhn continued to show his art in public exhibitions until 1948. He died in 1949 in White Plains, New York, after being hospitalized following a period of declining health. Throughout his life and following his death, Kuhn’s fame as an organizer of the Armory Show often eclipsed his work as a modernist painter.