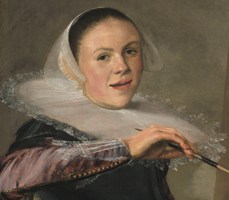 Judith Leyster was born in Haarlem and baptized there on July 28, 1609. Her father, Jan Willemsz, owned a brewery called the “Leyster” (lodestar), from which the family took its surname. Little is known of Leyster’s early training, but she clearly made a name for herself at a very young age: she is mentioned as an active artist in Samuel Ampzing’s description of the town of Haarlem, which was published in 1628 when she would have been just nineteen years old.

Not long thereafter, Leyster’s family moved to Vreeland near Utrecht, and many have speculated that at this time she came under the influence of the Utrecht Caravaggisti. Nevertheless, the dramatic effects of indirect, artificial lighting that these painters typically employed are not entirely paralleled in any of her canvases. It seems more likely that the superficial similarities to the style of the Utrecht Caravaggisti came by way of the circle of painters around in Haarlem. By September 1629, Leyster’s parents had moved to Zaandam, near Amsterdam, although it is not clear how long she remained with them there before returning to Haarlem. She was certainly back in her native town by November 1631 when she was a witness at the baptism of one of Hals’ children.

As with many artists Leyster may have trained with different masters, but documentary evidence of her artistic training is scarce. Samuel Ampzing seems to suggest that she studied with Frans Pietersz de Grebber (1573–1643), who ran a large and active workshop in the 1620s, but the wording of his text leaves the question in doubt.[1]  No records survive to prove that Leyster studied with Frans Hals, but a number of her works show her to have been one of his closest and most successful followers. She also was influenced by the work of Frans’ brother, Dirck Hals (1591–1656). Should Leyster have been in either the De Grebber or Hals studios, it would have been prior to 1629, the year in which she starts to sign and date her paintings, and probably before 1627, when Ampzing implies that she was working as an independent artist.[2]

In the years following her return to Haarlem, Leyster achieved a degree of professional success that was quite remarkable for a woman of her time. By 1633 she was a member of the Saint Luke’s Guild of Haarlem, the first woman admitted for whom an oeuvre can be cited, and in 1635 she is recorded as having three students. One of these, Willem Woutersz, subsequently defected to the studio of Hals, presumably without adequate warning, for Leyster went before the Saint Luke’s Guild in October 1635 to make a (successful) demand for payment from Woutersz’s mother. In 1636 she married Jan Miense Molenaer (c. 1609/1610–1668).

Stylistically, much of her work resembles that of Frans Hals. Her brushwork is quite free and spontaneous, and she favored the same types of subjects and compositions, notably energetic genre scenes depicting one or two figures, often children engaged in some kind of merrymaking. In addition to these compositions, Leyster also painted still lifes. It is sometimes difficult to distinguish between her early works and the works of her husband, a problem that is aggravated by the fact that they often shared studio props and models and may even have worked on each other’s pictures., a fellow artist and at times close follower of Hals. The couple subsequently moved to Amsterdam, where they lived until 1648. Leyster painted very little after her marriage. In October of 1648 the couple bought a house in Heemstede, near Haarlem, but continued to make regular visits to Amsterdam, where they had another house, and Haarlem. Leyster died in 1660 and was buried in Heemstede on February 10.

[1] See Frima Fox Hofrichter, Judith Leyster: A Woman Painter in Holland’s Golden Age (Doornspijk, 1989), 14. Ampzing may have included Leyster in his description of the De Grebber workshop to link her with another woman artist of the period, De Grebber’s daughter, Maria (c. 1602–1680).