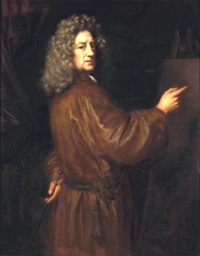 Maes was born in Dordrecht in January 1634, the son of a well-to-do soap manufacturer and merchant.  The details and dates of his early career are not precisely known, but Houbraken tells us that Maes’ first instruction in drawing came from “an ordinary master” (een gemeen Meester), probably a local artist in Dordrecht. At some point in the late 1640s, however, he went to Amsterdam and studied with , becoming one of that master’s most accomplished pupils.

By the end of 1653, Maes was back in Dordrecht, where he was betrothed on December 28 to Adriana Brouwers, the widow of a preacher. They were married there on January 13, 1654, and had three children (one of whom died young). The influence of Rembrandt, and specifically the style and subject matter of his work of the 1640s, continued in Maes’ work after his return to Dordrecht. This impact is especially apparent in the case of his drawings, which are often difficult to distinguish with certainty from those of Rembrandt. Maes produced almost all of his small-scale paintings of domestic interiors during the mid-1650s, one of the two types of picture for which he is best known.

By 1656 Maes began painting portraits, and he eventually worked exclusively as a fashionable portrait painter. He sought to infuse his depictions of Dutch merchants with an elegance comparable to that found in paintings by  and , and Houbraken relates that Maes actually traveled to Antwerp to study the works of Flemish masters. His own portraits, however, always retained a more literal likeness of the sitter than did those of Van Dyck.

Houbraken attributed the stylistic changes evident in Maes’ painting during the 1660s to market pressure, saying that Maes abandoned Rembrandt’s way of painting “when he took up portraiture and discovered that young ladies would rather be painted in white than in brown.”[1] At this time, Maes not only altered his style but also completely changed his signature from block letters to a more elegant form. Were it not for the existence of transitional paintings signed in the earlier manner but showing signs of the artist’s later style, one might well conclude that the late portraits were executed by an entirely different N. Maes.