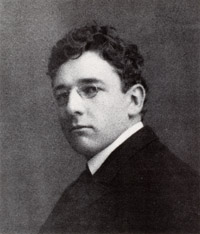 Patrick Henry Bruce was born in Long Island, Virginia. After studying in New York under and , Bruce moved to Paris in 1903, where he remained until 1936.

In Paris, Bruce was a member of the avant-garde circles surrounding and the prominent collectors Gertrude and Leo Stein. During the prewar period, he assimilated the influence of Matisse and , combining the vivid colors of fauvism with the structure of cubism in his works. In 1912 Bruce met the modernist painters and , and he developed his large-scale, boldly hued abstract “Compositions” based on the Delaunays' orphic cubism. In 1917 Bruce began painting cubist-inspired geometric still lifes, depicting blocklike forms such as cylinders, cubes, and wedges in a palette of unmodulated blues, greens, lavenders, and reds. The “Forms,” as Bruce called them, were regularly exhibited in Paris during his lifetime but were little known in the United States until 1965, when they were included in an exhibition on synchromism at Knoedler Gallery in New York.

Suffering from melancholy and a sense of isolation, Bruce destroyed most of his paintings in 1933, sending the surviving works to his longtime friend Henri-Pierre Roché. In July 1936 he moved to New York, living with his sister on East 68th Street. He committed suicide just four months later.