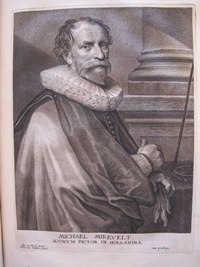 Michiel van Miereveld was born in Delft on May 1, 1567. His father, Jan Michelz Miereveld (1528–1612), was a goldsmith. Although Michiel was to become one of Holland's leading exponents of formal portraiture during the first decades of the seventeenth century, his earliest training was as a history painter, working in the international late mannerist style. Karel van Mander wrote that Van Miereveld's first teacher was Willem Willemsz and that he then studied with "Augustijn at Delft" for some ten weeks before moving on at the age of about fourteen to the studio of at Utrecht. There he remained for more than two years; following Blocklandt's death, Van Miereveld returned to Delft and began working as a portraitist.

Van Miereveld registered as a member of the Delft painters' guild in 1587 and served as its hoofdman on two occasions, from 1589 to 1590 and again from 1611 to 1612. He frequently traveled the short distance to The Hague to work at the court of the Stadholder, Prince Maurits of Orange. Van Miereveld entered that city's Guild of Saint Luke in 1625, but it is not clear whether he ever lived and worked in The Hague on a full-time basis. Both of his marriages took place in Delft, in 1589 and 1633 respectively, and he bought a house there in 1639. He died in Delft on June 27, 1641. Van Miereveld's work was extremely popular and brought him fame and fortune. At the time of his death, he owned two houses and various pieces of land and belonged “to the wealthiest stratum of the bourgeoisie in Delft.”[1] Sandrart claimed that Van Miereveld painted more than 10,000 portraits. While this figure must be an exaggeration, the artist's oeuvre is indeed very large and is further swelled by numerous repetitions and variations of his compositions executed by pupils and followers. and Anthonie Palamedesz (1601–1673) were his most notable pupils. Van Miereveld’s sons Pieter (1596–1623) and Jan (1604–1633) also became portraitists.

[1] John Michael Montias, Artists and Artisans in Delft: A Socio-Economic Study of the Seventeenth Century (Princeton, 1982), 129.

1982
Montias, John Michael. Artists and Artisans in Delft: A Socio-Economic Study of the Seventeenth Century. Princeton, 1982.