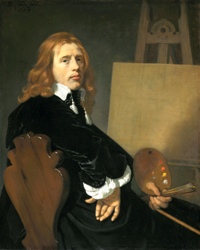 Paulus Potter came from a family of artists. His father, Pieter Simonsz Potter (c. 1600–1652), was a practicing artist, and his mother, Aaltje Paulusdr Bartsius, was the sister of the painter Willem Bartsius (born c. 1612). Paulus was baptized in Enkhuizen, on November 20, 1625. In 1631 the family moved to Amsterdam, where, according to Houbraken, Potter studied painting under his father. Other writers, however, have argued that Potter studied with the Amsterdam painter Claes Moeyaert (c. 1590/1591–1655), whose style was similar to that of Pieter Potter. Since a "P. Potter" was registered in 1642 as a student of the Haarlem artist Jacob de Wet (1610–c. 1675), it seems probable that Potter would also have been familiar with artistic currents in that city during the early 1640s.

By 1646 Potter was living in Delft, where he joined the painters’ guild on August 6 of that year. In 1647 the family seems to have moved to The Hague, for in that year his father registered with the guild in that city and his sister was baptized there. Potter himself is first mentioned in guild records there in 1649. On July 3, 1650, he married Adriana Balcken Eynde, the daughter of the city architect. From 1649 to 1652 Potter rented a house on the Dunne Bierkade owned by the landscape painter .

It may have been through his father-in-law, who worked on royal building projects, that Potter came to receive commissions from Amalia van Solms, widow of Frederik Hendrik, Prince of Orange. Potter executed at least one picture for her, now in the Hermitage, Saint Petersburg, but apparently he did not fulfill other obligations: in 1651 he was sued by the royal court for failure to deliver paintings.

By May 1, 1652, Potter had returned to Amsterdam, according to Houbraken at the urging of Dr. Nicolaes Tulp. In the following year he painted the impressive life-sized equestrian portrait of Nicolaes Tulp’s son, Dirck Tulp (Six Collection, Amsterdam). Potter died from tuberculosis shortly thereafter, at the young age of twenty-eight. He was buried in the Nieuwezijdskapel on January 17, 1654. Despite his short life, Potter produced a body of original and influential works. From very early in his career, he accorded animals an extremely important position in his compositions and was one of the first artists to depict them as subjects in their own right. He also produced some two dozen etchings of animal subjects.

Although he had no documented pupils, Potter may have influenced , for landscapes the latter produced around the time of Potter’s death are quite similar in style.