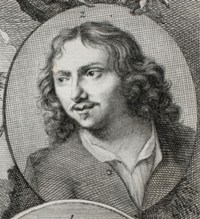 Pynacker’s approximate date of birth can be deduced from a document of January 22, 1652, in which he is recorded as being thirty-one years old. He was almost certainly born in Schiedam. He appears to have first had a career as wine merchant, like his father, Christiaen Pynacker. In this capacity he traveled to Delft where he met the Delft innkeeper, painter, and art dealer Adam Pick (c. 1622–before 1666), who became a close associate of Pynacker’s family. Only one painting by Pick survives, making it impossible to establish any stylistic influence he may have had on Pynacker, though he presumably helped him establish his career as a painter. Pynacker is recorded in Delft from 1649 to 1651 and again in 1657. He seems to have worked frequently in that city, although he may have continued to live in Schiedam, where documents mention him in 1651, 1652, and 1658. In 1654 and 1655 Pynacker worked for the Brandenburg royal court at Lenzen in Germany. Several of his paintings appear in Delft inventories of the early 1650s, and in about 1653 the Delft painter sketched copies of three of his landscapes.

On September 20, 1658, Pynacker married Eva Maria de Geest, the daughter of the portrait painter Wijbrand de Geest (1592–after 1660). Upon his marriage he converted to Catholicism, and his two children were baptized as Catholics in Schiedam in 1660 and 1661. During the 1660s Pynacker moved to Amsterdam, where he is recorded in 1669 and 1671, although he is also documented in Schiedam again in 1670, the year of his last dated painting. He died in Amsterdam in March 1673.

Houbraken states that Pynacker spent several years in Italy. Although his atmospheric, idyllic landscapes have a strongly Italianate character, there is no documentary evidence from the 1640s and 1650s to prove that he did indeed travel to Italy. He may have learned about the Italian campagna through the works of other artists, particularly , , and , whose works seem to have been a source of inspiration. Nevertheless, Pynacker’s landscapes are compositionally quite imaginative and adhere only rarely to the classical principles of composition favored by other Italianizing Dutch landscape painters. He also executed a few series of large landscapes that were commissioned by wealthy merchants as decorative ensembles to adorn their town houses and country properties.