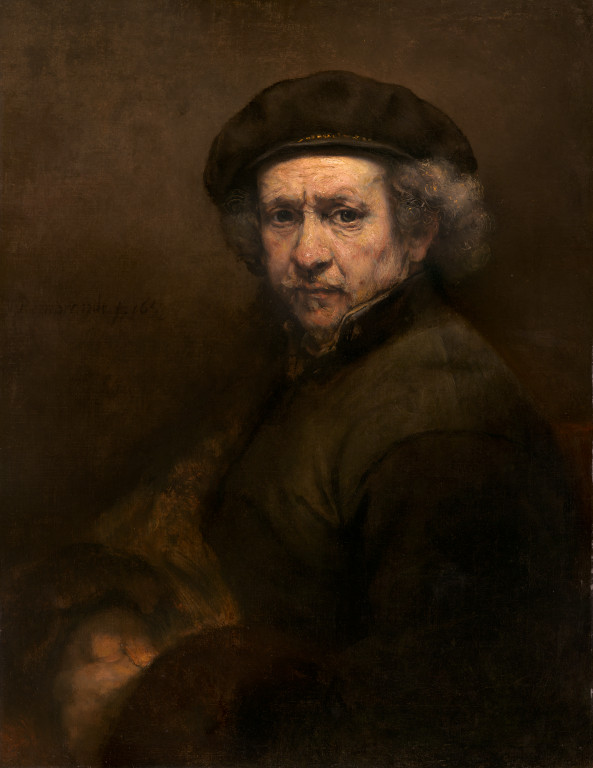 Rembrandt Harmensz van Rijn, born in Leiden on July 15, 1606, was the son of a miller, Harmen Gerritsz van Rijn, and his wife, Neeltgen van Zuytbrouck. The youngest son of at least ten children, Rembrandt was not expected to carry on his father’s business. Since the family was prosperous enough, they sent him to the Leiden Latin School, where he remained for seven years. In 1620 he enrolled briefly at the University of Leiden, perhaps to study theology. Orlers, Rembrandt’s first biographer, related that because “by nature he was moved toward the art of painting and drawing,” Rembrandt left the university to study the fundamentals of painting with the Leiden artist Jacob Isaacsz van Swanenburgh (1571–1638). After three years with this master, Rembrandt left in 1624 for Amsterdam, where he studied for six months under Pieter Lastman (1583–1633), the most important history painter of the day.

After returning to Leiden, Rembrandt quickly developed a reputation as a history painter and portraitist. By 1628 his work, together with that of his Leiden colleague , was enthusiastically praised by Constantijn Huygens (1596–1687), the secretary to the Prince of Orange. Huygens particularly admired Rembrandt’s uncanny ability to convey feeling through gesture and expression and through dramatic contrasts of light and dark. That same year, Rembrandt, at the age of twenty-two, took on his first pupils, and Isaac Jouderville (1612–1645/1648). Documents indicate that Jouderville paid Rembrandt one hundred guilders a year to study with him.

By 1631 Rembrandt had become financially involved with the Amsterdam art dealer Hendrik van Uylenburgh (c. 1587–1661). The nature of Van Uylenburgh’s enterprise, which was called “an academy” in its day, is not entirely understood, but it appears that he orchestrated an active art studio that specialized in portrait commissions. In any event, in about 1632 Rembrandt moved to Amsterdam, where he lived with Van Uylenburgh and ran his “academy” until 1635. Rembrandt achieved tremendous success in his lifetime. He received many commissions and attracted a number of students who came to learn his method of painting. Artists who had previously been trained elsewhere, including Jacob Backer (1608–1651), , and , worked during these years at Van Uylenburgh’s studio under Rembrandt’s guidance.

In 1633 Rembrandt became engaged to Van Uylenburgh’s niece Saskia, daughter of a wealthy and prominent Frisian family. They married the following year. In 1639, at the height of his success, Rembrandt purchased a large house on the Sint-Anthonisbreestraat in Amsterdam for a considerable amount of money. To acquire the house, however, he had to borrow heavily, creating a debt that would eventually figure in his financial problems of the mid- 1650s. Rembrandt and Saskia had four children, but only Titus, born in 1641, survived infancy. After a long illness Saskia died in 1642, the very year Rembrandt painted The Night Watch (Rijksmuseum, Amsterdam).

During the 1640s life became more unsettled for Rembrandt. Geertje Dirckx soon entered the household as a nurse for Titus and became a companion to Rembrandt. In 1649 he dismissed her and entered into a relationship with Hendrickje Stoffels that would last until her death in 1663. While Hendrickje seems to have been a warm and caring companion for Rembrandt, the early 1650s were fraught with personal turmoil. Rembrandt and Geertje Dirckx became embroiled in a number of contentious lawsuits that suggest he treated his former companion quite badly. Rembrandt and Hendrickje never married because of a stipulation in Saskia’s will that he was bound to transfer half of his and Saskia’s joint assets to Titus should he remarry.[1] After Saskia’s death, the net value of their assets was determined to be more than forty thousand guilders. Presumably in the early 1650s Rembrandt did not have twenty thousand guilders to give to Titus. Being unmarried caused Hendrickje public humiliation when she became pregnant in 1654. She was called before a council of the Dutch Reformed Church and censored for having “lived with Rembrandt like a whore.” The couple’s daughter, Cornelia, was baptized on October 30, 1654.

Perhaps as a result of the public outrage over his domestic situation or his treatment of Geertje Dirckx, Rembrandt lost favor with many of his patrons and became burdened by financial difficulties during these years. In 1656 he was forced to declare bankruptcy, which led to the auctioning off of his estate, including his large art collection, in 1657 and 1658. He then moved to an artist’s quarter in the Jordaan district of Amsterdam, eventually renting a relatively small house on the Rozengracht where he lived for the rest of his life. Hendrickje and Titus subsequently formed a business partnership to protect Rembrandt from further demands of creditors.

Although Rembrandt still received a number of important portrait commissions during the late 1650s and early 1660s, stylistic trends had veered away from his deeply personal manner of painting. He became more and more isolated from the mainstreams of Dutch art. No students are documented as having worked with him during the latter half of the 1650s, and only one student, Aert de Gelder (1645–1727), is known to have come to study with him in the 1660s.

Rembrandt’s financial situation remained poor during the 1660s. He owed a substantial amount of money, in particular to the art dealer and collector Lodewijk van Ludick, a debt he hoped to repay with the money he would receive from his large painting for one of the lunettes in the Amsterdam Town Hall, The Conspiracy of Claudius Civilis (Nationalmuseum, Stockholm). Rembrandt’s composition, however, was rejected by city authorities in 1662. To raise funds he was then forced to sell Saskia’s grave in the Oude Kerk. He never regained financial solvency and ended up living on the savings of his daughter, Cornelia.

Although Rembrandt remained famous as an artist, there seems to have been little to lighten the burdens of his life during his last years. In 1663 the plague ravaged Amsterdam and claimed the life of Hendrickje. Four years later Titus married Magdalena van Loo, but in 1668 he also died, the victim of another epidemic. When Rembrandt died on October 4, 1669, he was buried in a rented grave, which has long since disappeared, in the Westerkerk, Amsterdam.

2006
Crenshaw, Paul. Rembrandt's bankruptcy: the artist, his patrons, and the art market in seventeenth-century Netherlands. Cambridge and New York, 2006.