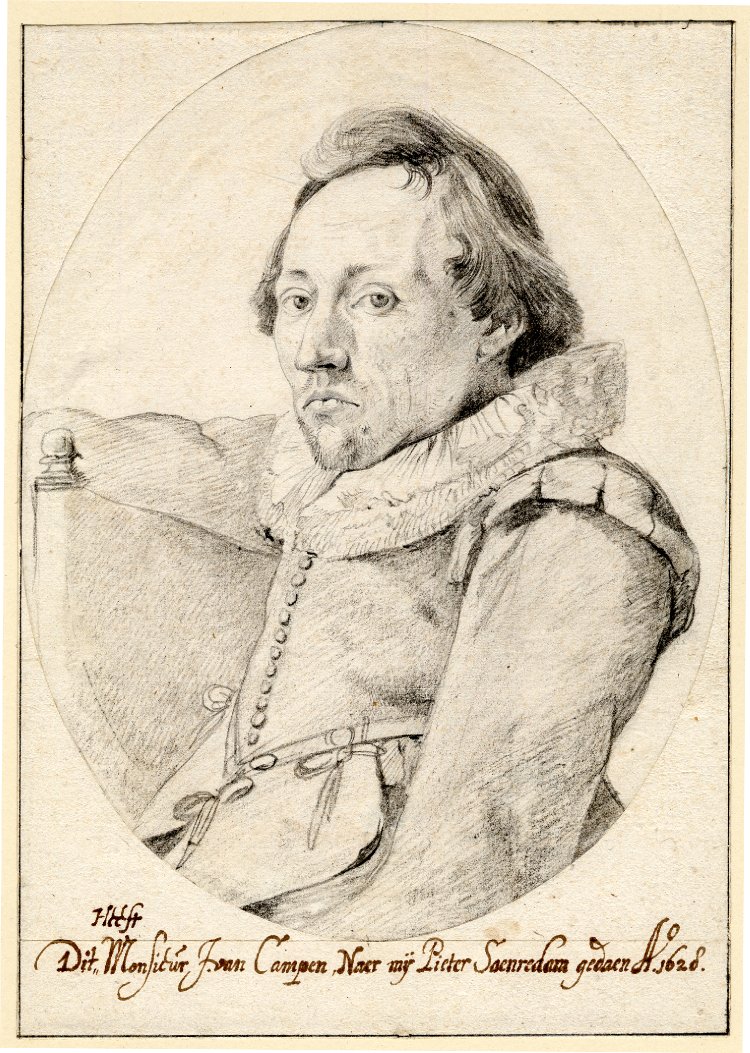 Pieter Jansz Saenredam was born in the village of Assendelft on June 9, 1597. His father, , an important late mannerist engraver and draftsman, died young in 1607, after which the family moved to nearby Haarlem. Pieter began his artistic training on May 10, 1612, in Haarlem in the studio of Frans Pietersz de Grebber (1573–1649). After a ten-year apprenticeship, Saenredam became a master in the Saint Luke’s Guild in Haarlem on April 24, 1623. He was an officer in the guild in 1635 and 1640, and a deken, or board member, in 1642.

Although Saenredam is not recorded as ever having studied with a specialist architectural painter, his interest in architecture may have been encouraged by various painter-architects active in Haarlem, most notably Salomon de Bray (1597–1664), Jacob van Campen (1595–1657), and . A further contact that must have been important to the young artist was the mathematician and surveyor Pieter Wils. Soon after his apprenticeship with De Grebber, Saenredam began to produce the precise and restrained architectural compositions for which he is famous. Cornelis de Bie wrote in 1661 that from about 1628 the artist “devoted himself entirely to painting perspectives, churches, halls, galleries, buildings, and other things from the outside as well as the inside, in such a way, after life, that their essence and nature could not be shown to a greater perfection.”[1] The date that De Bie mentions in this passage is also that of Saenredam’s earliest surviving church interior.

The two main churches of Haarlem—Saint Bavo and the Nieuwe Kerk—were among Saenredam’s favorite subjects, although he also painted churches and cathedrals in a number of other cities, including ’s-Hertogenbosch, Assendelft, Alkmaar, Utrecht, Amsterdam, and Rhenen. His representations of these and other buildings have a portraitlike quality. They were based on preliminary drawings made at the site and elaborate construction drawings made subsequently with the help of straightedge rulers and compasses. In these drawings Saenredam worked out the proportions of columns and arches and the overall perspective system. Interestingly, his paintings often date years later than the drawings upon which they are based. As in the instance of his painting of the , Saenredam also occasionally worked from drawings done by other artists of buildings and places he had never seen. His relatively small oeuvre consists of about fifty paintings, some 150 drawings, and a few prints executed early in his career.

Saenredam married Aefje Gerritsdr on December 5, 1638, at Bloemendael. He and his wife had one daughter. Saenredam, who had extensive archaeological interests, owned an impressive library of scholarly works as well as a collection of paintings and drawings, which included an album of views of Rome by the sixteenth-century Haarlem artist . He had only a few students, among them Claes Cornelisz van Assendelft (1627–1668) in the early 1640s and Claes Heerman the Younger (dates unknown) in the early 1650s. It has often been argued that Saenredam asked other artists to paint figures within his architectural compositions, among them , , and . Saenredam was buried in Haarlem on May 31, 1665.

1987
Ruurs, Rob. Saenredam: The Art of Perspective. (Oculi, Studies in the Arts of the Low Countries, nr. 1) Amsterdam and Philadelphia, 1987.