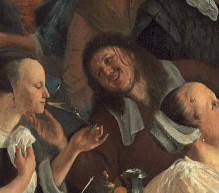 Jan Steen was born in Leiden, where his father was a brewer and grain merchant. The date of his birth is not known, but the artist was twenty years old when he enrolled at the University of Leiden in 1646. Two years later he is recorded as one of the founding members of Leiden’s newly formed Saint Luke’s Guild. Arnold Houbraken states that Steen’s artistic education came from , the Leiden-born landscape painter who had settled in The Hague. According to Jacob Campo Weyerman, Steen had previously studied with Nicolaes Knüpfer (c. 1603–1655) in Utrecht and with in Haarlem.

Steen married Van Goyen’s daughter Margaretha in September 1649, and he appears to have remained in The Hague until 1654. In that year he is recorded on several occasions back in Leiden. From 1654 until 1657 Steen’s father leased a Delft brewery by the name of “The Snake” on his son’s behalf, and it seems that the artist lived in Delft during those years. From 1656 to 1660 Steen lived at Warmond, a small town near Leiden. The increased interest in still life details and careful finish of the paintings he produced during this period suggest his contact with the work of the Leiden fijnschilders (fine painters).

By 1661 Steen had moved to Haarlem, where he entered the Saint Luke’s Guild in that year. During the nine years he spent in Haarlem, Steen created many of his greatest paintings, including a number of large, complex scenes of families and merrymakers containing witty evocations of proverbs, emblems, or other moralizing messages. His pictures, which are marked by a sophisticated use of contemporary literature and popular theater, often depict characters from both the Italian commedia dell’arte and the native Dutch rederijkerskamers (rhetoricians’ chambers), although Steen was not a rhetorician himself. In addition to genre subjects, he depicted historical and religious subjects during the 1660s and 1670s. He remained a Catholic all his life.

In 1670, one year after the death of his wife, Steen moved to Leiden, having inherited his father’s house. Two years later, he received a license to open an inn, a fact that has contributed to his traditional reputation as a dissolute drunkard. Although he sometimes included his self-portrait in this guise in scenes of apparent immorality and chaos, there is no incriminating evidence—beyond his possession of an acute sense of humor—to suggest that his real life mirrored his art.

In 1673 Steen married Marije Herculens van Egmont, who survived him by eight years. In 1674 he was elected deken of the Leiden guild, having served as an officer at the rank of hoofdman for the previous three years. There is no record of his having had any pupils, although a number of artists, notably Richard Brakenburg (1650–1702), imitated his style.

1975
Gudlaugsson, Sturla. The Comedians in the Work of Jan Steen and his Contemporaries. Translated by James Brockway and Patricia Wardle from 1945 ed. Soest, 1975.