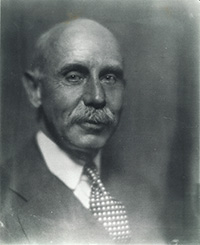 Allen Tucker, born in Brooklyn, New York, in 1866, began his career as an architect. He earned an architecture degree from the School of Mines at Columbia University in 1888 and worked for the architecture firm of McIlvaine and Tucker from 1895 to 1904. Throughout the 1890s he studied at the Art Students League in New York, where one of his instructors was the American impressionist , a significant influence on Tucker’s early style. By 1904 Tucker had decided to leave the field of architecture and devote himself to painting full time.

In 1910 Tucker was included in the New York Exhibition of Independent Artists, organized as an alternative to the conservative practices of the National Academy of Design. The following year Tucker became a founding member of the American Association of Painters and Sculptors, which sought to create new spaces for young artists to exhibit their work. This association organized the Armory Show in 1913. Tucker produced the catalog for the exhibition, and five of his paintings were included in the show. The Armory Show, which was the first opportunity for many Americans to view modern European art, prompted Tucker’s shift to a post-impressionist style influenced by .

In 1914, in his late forties, Tucker volunteered to serve in the American Ambulance Field Service in France, and then worked in a Red Cross hospital once the United States entered World War I. He wrote about his war experience in a book of poems, There and Here (1919).

Tucker helped organize and was included in the first exhibition of the Society of Independent Artists in 1917, and he had his first solo exhibition at the Whitney Studio Club in 1918. In the 1920s Tucker taught at the Art Students League. He continued to write, publishing Design and the Idea in 1930 and a monograph on Twachtman in 1931. Tucker died in New York in 1939.