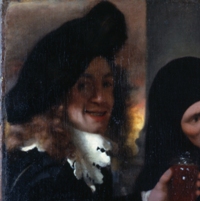 The life and art of Johannes Vermeer are closely associated with the city of Delft. He was born in Delft in 1632 and lived there until his death in 1675. His father, Reynier Vermeer, was a silk weaver who produced caffa, a fine satin fabric, but in 1631 he also registered in the Saint Luke’s Guild in Delft as a master art dealer. By 1641 he was sufficiently prosperous to purchase a large house, the “Mechelen,” which contained an inn on the market square in Delft and from which he probably also sold paintings. When Reynier died in 1652 Johannes apparently inherited his business. By that time he must have already decided on a career as a painter. It is assumed that he trained in Delft, perhaps with , who seems to have had close associations with Vermeer’s family, or with . No documents, however, exist about his artistic training or apprenticeship, and he may have studied elsewhere, perhaps in Utrecht or Amsterdam.

Vermeer, who was baptized on October 31, 1632, in the Reformed Church in Delft, was raised a Protestant. In April 1653, however, he married into a Catholic family and seems to have converted to Catholicism shortly before that date to placate his future mother-in-law, Maria Thins, who lived in the so-called Papenhoek (Papists’ Corner) of Delft, adjacent to the Jesuit church on the Oude Langendijck, one of two hidden churches where Catholics could worship. Vermeer and his wife, Catharina Bolnes, eventually moved into her house. They named their first daughter Maria and their first son Ignatius, after the patron saint of the Jesuit order.

Vermeer became a master in the Saint Luke’s Guild on December 29, 1653. His early aspiration was to be a history painter, and his first works were large-scale mythological and religious paintings. Shortly thereafter he began to paint the genre scenes, landscapes, and allegories for which he became so renowned. Although Vermeer’s subject matter changed in the mid-1650s, he nevertheless continued to imbue his later works with the quiet, intimate moods he had preferred in his early history paintings.

Very little is known about Vermeer’s relationships with other painters who might have influenced the thematic and stylistic directions of his art. He apparently knew , with whom he cosigned a document in 1653. Another artist who may well have had an impact on his work during the 1650s was , who painted comparable scenes in Delft during that period. Vermeer remained a respected artist in Delft throughout the rest of his life. He was named hoofdman of the Saint Luke’s Guild in 1662, 1663, 1670, and 1671.

Vermeer’s few works—they number about thirty-five—were not well known outside of Delft. It has been postulated that many of his paintings were concentrated in the collection of a patron in that city who seems to have had a special relationship with the artist.[1] When Vermeer died, however, he was heavily in debt, in part because his art-dealing business had suffered during the difficult economic times in the Netherlands in the early 1670s. He was survived by his wife and eleven children, ten of whom were minors. His wife petitioned for bankruptcy the following year. Antonie van Leeuwenhoek, the famed Delft microscopist, was named trustee of the estate.

Vermeer’s works were appreciated during the eighteenth century, but his fame did not develop until the late nineteenth century, partly a result of enthusiastic appraisal by the French critic Théophile Thoré, whose pseudonym was William Bürger.[2]