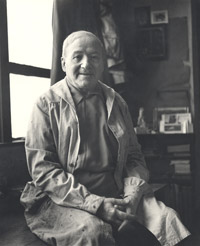 Max Weber was born in Bialystok, Russia (now Poland), the son of a poor Jewish tailor. He emigrated to the United States with his family in 1891 and settled in Williamsburg, Brooklyn. After graduating from the Pratt Institute, where he had studied under , Weber taught art at public schools in Lynchburg, Virginia, and Duluth, Minnesota. In 1905 Weber went to Paris, where he first studied at traditional ateliers such as the Académie Julian, the Académie Colarossi, and the Académie de la Grande Chaumière. He soon gravitated toward avant-garde circles, however, studying under in 1907, and becoming a close friend of . Weber was particularly impressed by the work of on view at the Salon d’Automne in 1906 and 1907 and by the nonwestern art that he saw in ethnographic collections. He associated with influential figures in the cubist movement such as , , and .

Upon his return to New York in 1909, Weber conveyed his firsthand knowledge of the Parisian avant-garde to the burgeoning circle of American modernists gathering around . After exhibiting at Stieglitz's 291 gallery in 1910 and staging his first solo exhibition there in 1911, Weber and Stieglitz parted ways. A major exhibition of his work was held at the Newark Museum of Art, New Jersey, in 1913. Although he declined to participate in the 1913 Armory Show, he did have some works in the first exhibition of the Society of Independent Artists in 1917. Weber taught art history at the Clarence White School of Photography in New York from 1914 to 1918, and art at the Art Students League of New York from 1920 to 1921, and 1925 to 1927. In addition to painting, he experimented with abstract sculpture and was the author of Cubist Poems (1913), Essays on Art (1916), and Primitives (1926).

Around 1920 Weber abandoned cubist abstraction and began to paint in a more representational style that was influenced by German expressionism and fauvism. In 1924 the Galerie Bernheim-Jeune in Paris gave him a retrospective exhibition, and in 1929 he was included in Paintings by Nineteen Living Americans at the Museum of Modern Art, which also gave him a retrospective the following year. In the 1930s he painted mostly Old Testament subjects and scenes from Jewish life that harkened back to his upbringing in Bialystok. Solo shows of his work were held at the Whitney Museum of American Art in 1949, the Jewish Museum in 1956, and the Newark Museum of Art in 1959. He died in 1961 in Great Neck, New York, where he had lived since 1929.