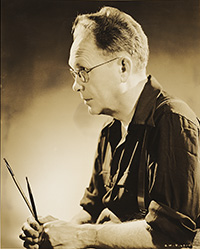 Grant Wood was born on February 13, 1891, on a farm near the small town of Anamosa, Iowa. After his father's death in 1901 the family moved to the larger city of Cedar Rapids. Immediately after graduating high school in 1910 Wood entered the summer term of the Minneapolis School of Design, Handicraft, and Normal Art. He studied with Ernest A. Batchelder, an advocate of the arts and crafts movement and art nouveau design. Wood also studied life drawing at the University of Iowa and at the School of the Art Institute of Chicago, where he moved in 1913. In Chicago he worked as a designer in a silversmith shop and then made an unsuccessful attempt to establish a jewelry design business. Wood returned to Cedar Rapids in 1916 to help support his mother and sister. He built homes for the family to live in together—first a small cottage and then a larger house that he constructed with a friend. Near the end of World War I he joined the army, for which he designed camouflage scenes. When he returned to Cedar Rapids in 1919 Wood taught art at a local high school, a position he held until 1925. During this time his work included small landscape paintings in a loose impressionist style, metalwork, and sculpture crafted out of found materials.

Wood first traveled to Europe in 1920, visiting Paris with fellow artist Marvin Cone. He returned to Paris in 1923 to attend the Académie Julian, and again in 1926, when he had his first gallery show. While abroad Wood familiarized himself with impressionism and post-impressionism, but he rejected more radical modernist styles such as cubism in his own paintings. Wood’s work was popular in the business community of Cedar Rapids, where his commissions ranged widely and his style varied to suit the client: murals for restaurants in a hotel chain, portraits for a dairy equipment factory, and store and home design. He converted a hayloft behind the funeral home of his patron and sometimes agent, David Turner, to a home and studio that he shared with his mother and sister. In 1928 Wood went to Munich, Germany, to supervise the manufacture of a stained-glass window that had been commissioned by the Daughters of the American Revolution for the Veterans Memorial Building in Cedar Rapids. There he was attracted to the modern Neue Sachlichkeit (new objectivity) movement. Inspired by northern masters such as and , this movement revived a realist style of painting with stylized forms. Wood’s time in Germany, coupled with his involvement in the burgeoning regionalism of the Cedar Rapids artistic community, led to a decisive change in his style.

Wood attained national stature in 1930 with the painting American Gothic (Art Institute of Chicago). He came to be regarded as one of the three primary artists of American regionalism, along with and . Following the success of American Gothic, Wood turned to images of the people, life, and landscape of the American heartland. He also illustrated archetypal episodes in American history, as in The Midnight Ride of Paul Revere (1931) and Parson Weems’ Fable (1939). His works are painted in a distinctive faux naïve style. In 1932 he cofounded the Stone City Art Colony and Art School in rural Iowa, a short-lived community for young midwestern artists. In 1934 Wood became director of the New Deal Public Works Art Project in Iowa, and later that year he started teaching at the University of Iowa. In the midst of controversy over Wood’s position at the university, where the art department was moving more decisively toward modernism, Wood died of liver cancer on February 12, 1942.