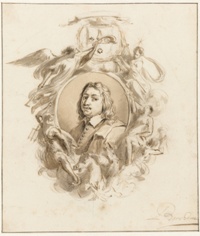 Nicolaes Berchem was one of the most popular and successful Italianate landscape painters of his day. Aside from views of Italy, his extensive oeuvre of paintings, drawings, and etchings consists of depictions of the hunt and biblical and mythological scenes. Born in Haarlem in 1620, Berchem received his early training under his father, the still-life painter . Houbra­ken, however, enumerated other teachers, including , Claes Moeyaert (1591–1655), Pieter de Grebber (c. 1600–1652/1653), Jan Wils (c. 1600–1666), and, somewhat improbably, Berchem’s younger cousin Jan Baptist Weenix (1621–1660/1661).

Berchem entered the Saint Luke’s Guild in Haarlem in 1642 and immediately took on three pupils. He married Catrijne Claes de Groot in Haarlem in 1646. Berchem had an association with , and in 1650 the two artists made a trip to the area around Bentheim, near the German border. They collaborated on several paintings in 1652 and 1653.

Certain works by Berchem in the early 1650s are close in style to Ruisdael’s landscapes, yet other paintings demonstrate an awareness of Italianate painters who had returned to the Netherlands in the previous two decades. The most important of these artists for Berchem’s work were Weenix, , , and . While Van Laer was instrumental in formulating Berchem’s treatment of figures, the Italianate artist who had the most lasting impact on his landscapes, in particular his harbor scenes, was Asselijn.

Despite the fact that Italianate-style paintings exist in Berchem’s oeuvre as early as the late 1640s, it seems unlikely that Berchem had actually visited Italy by this date. It is more probable, as recent scholars have postulated for stylistic reasons that Berchem traveled there between 1653 and 1656. In any case, by the late 1650s he had become one of the most sensitive interpreters of both the pastoral and the exotic character qualities of Italy.

Berchem apparently moved permanently to Amsterdam in 1677, although he is mentioned there as early as 1660. In his later years he also painted a number of allegorical scenes and executed designs for maps. He had many pupils throughout his career, including , , and Jacob Ochtervelt (1634–1682). His students Abraham Begeyn (1637/1638–1697) and William Romeyn (c. 1624–1694) emulated their teacher’s style quite closely, while other artists copied the master’s work. Even more indicative of Berchem’s fame was the large number of prints made after his paintings in the seventeenth and eighteenth centuries. Indeed, by the mid-eighteenth century, he was valued as one of the foremost seventeenth-century Dutch painters.